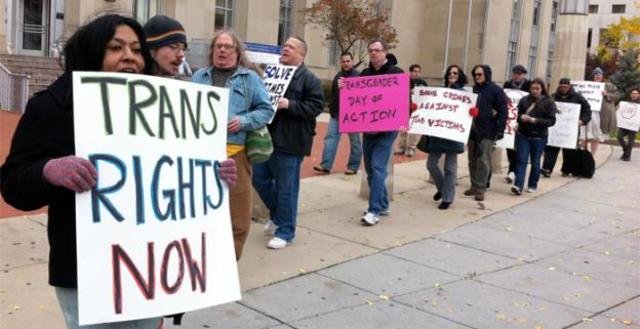 March 16, 2017 (MercatorNet) — Prediction: by 2020, the LGBT acronym will have disappeared. The Ls, the Gs, the Bs, and the Ts will still be with us. But their alliance against the “straight” world will have broken up.

You can already hear the distant boom-boom of breaking ice. The latest absurd episode of LGB versus T took place in the American state of Maine earlier this week at Kennebunk High School. As a feature of its diversity week the school was to be the first in the state to fly the gay pride rainbow flag. But it was hauled down after a trans student complained that it might embarrass other trans students.

Something similar happened last year at the University of British Columbia. A trans woman incinerated a gay pride flag hoisted to celebrate LGBT OutWeek festivities. She later explained that she felt diminished when the university applauded the LGBT community. “Transsexual people do struggle with being marginalized within the LGBT community,” said the chair of Vancouver's Trans Alliance Society.

This is not a new idea, either. A couple of years ago, a gay activist wrote a much-criticised column in USA Today which argued that LGBs and Ts should go their separate ways:

Make no mistake, the gay community needs to file for divorce with the trans community. They are no longer working toward the same goals … Unlike members of the trans community, who are working against their biology and trying to change who they are physically, gay or lesbian people are trying to be nobody but themselves. They are not seeking surgery or hormone treatments. They love the same gender; they don’t want to be a different gender.

Homosexuality represents a mistake about the purpose of sexuality; it is not a mistake about biology. Gays and lesbians affirm and even exaggerate their masculinity and femininity. The claim of transgenders is far more radical. They deny that the sex with which they were born with has any inherent meaning; it is just a matter of choice. So it’s just a matter of time before this marriage of convenience dissolves. The various groups will recognise that they have little in common other than feeling aggrieved by conventional sexual mores.

The hostility felt by some gays and lesbians towards the trans movement is matched or even exceeded by the fury of some feminists. Germaine Greer, the famously profane Australian feminist icon of the 70s and 80s, is fed up. A couple of years ago she was vilified for speaking her mind in a statement to a popular BBC show:

“Just because you lop off your penis and then wear a dress doesn't make you a ******* woman. I’ve asked my doctor to give me long ears and liver spots and I’m going to wear a brown coat but that won’t turn me into a ******* cocker spaniel.

The view of radical feminists is that trans women are living in a world of Barbie doll femininity; they have not suffered under the oppression of the patriarchy and do not deserve to masquerade as women. They were outraged when Caitlyn (Bruce) Jenner told Buzzfeed “The hardest part about being a woman is figuring out what to wear” — not bearing children, raising children, coping with sexism or making ends meet.

Take, for instance, the eminent BBC presenter Jenni Murray. She was under fire earlier this month over an article she wrote in the Sunday Times Magazine about trans women. She denied being “transphobic”, but said that sex changes cannot turn men into “real women”. (The BBC chastised her for her incendiary remarks – so much for free speech!)

The issue has also split feminist theoreticians. Some scholars feel that trans women are just men colonising femininity. In their eyes, it’s a new strategy of dominance dreamed up by the same old patriarchy that invented glass ceilings. Janice Raymond, the author of a number of well-known feminist books, argues that the transgender movement threatens to unravel feminism:

“If we have to change our bodies in order to challenge gender norms, we are not transcending gender, ie, we are not free from gender. We are exchanging one gendered identity for the other. I think the task of radical feminism is to dismantle gender wherever it rears its hydra-headed appearance.”

If the New York Times is an accurate barometer of cultural trends, then feminism is in danger of being eclipsed by transgender issues, even though 49.6 percent of the world population are women, and only 0.3 percent (if that) are transgender. Wednesday March 8 was International Women’s Day (even Donald Trump tweeted about it), but you wouldn’t know it from looking at the editorial pages of the Times. What did catch the eye was a powerful op-ed column published the day before by Gavin Grimm, the trans boy at the centre of a legal fight in Virginia.

Conservatives are fond of quoting the prophetic words of the poet W.B. Yeats: “Things fall apart; the centre cannot hold; Mere anarchy is loosed upon the world.” But the first things to fall apart will be the ragtag alliance of opponents of traditional sexual mores and traditional marriage.