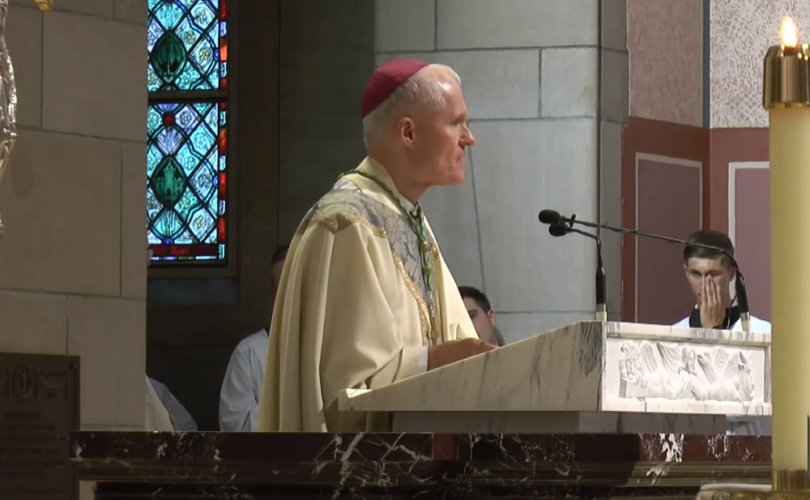 Bishop Mark Brennan of the Diocese of Wheeling-Charleston, W.Va.OfficialDWC / YouTube

Please understand the significance of this this news story. For the first time, an American bishop has denounced his predecessor for gross misconduct, demanded an apology, and sought restitution for victims from the offending prelate.

Bishop Mark Brennan of Wheeling-Charleston, West Virginia, wants the previous leader of that diocese, Bishop Michael Bransfield, to pay back nearly $800,000 of the diocesan funds that had maintained him in a life of luxury. Bishop Brennan also said that Bransfield will lose his retirement benefits, and his right to be buried in a diocesan cemetery.

These penalties, Bishop Brennan said, are a matter of “restorative justice.” But more than that: “It is also for his own spiritual good and his own healing as a man who professes to follow Christ.”

Over the past two decades, dozens of American bishops have been shown guilty of gross negligence and/or personal misconduct. But in case after case, a prelate who resigned in disgrace has been treated with elaborate courtesy by his colleagues and especially by his successors.

Was Archbishop Rembert Weakland required to pay back the $450,000 he paid in hush money to a former lover? No.

Was Bishop Robert Lynch asked to help the diocese pay $100,000 in “severance” to an aide who complained of sexual harassment? No.

For that matter, were any bishops expected to help foot the bill for the thousands of dollars in legal fees that they racked up defending themselves against civil and criminal charges? No.

Once, back in 2013, I rejoiced when Archbishop José Gomez of Los Angeles announced that, after reading accounts of how his predecessor had handled abuse complaints, he “informed Cardinal Mahony that he will no longer have any administrative or public duties.” At the time I wrote:

Now at last — a decade overdue, but better late than never — we have the first clear public example of fraternal correction. One prelate has held another to account.

Unfortunately, I was celebrating too soon. Cardinal Mahony apparently sought, and received, help from friends in Rome to overturn Archbishop Gomez' decision. Although no public announcement was issued, in fact Cardinal Mahony continued to exercise public office. Last year he served as the Pope's honorary representative at 150th-anniversary celebrations for the Scranton diocese. Meanwhile Archbishop Gomez — the head of the largest archdiocese in the US, and now the president of the US bishops' conference — is still waiting to receive a red hat.

But now Bishop Brennan has passed judgment on his predecessor. More important, perhaps, he has done so with the permission of — in fact at the request of — the Vatican. Most important of all, in doing so he has shown a pastor's concern both for the bishop and for his victims — a recognition that the bishop must atone for his scandalous conduct, for the welfare of the Church and the salvation of his soul.

For that breakthrough — for a bishop's forthright avowal that he must express public abhorrence for his predecessor's behavior, for a bishop's display that he is and should be angered by a colleague's betrayal — I'm giving thanks.