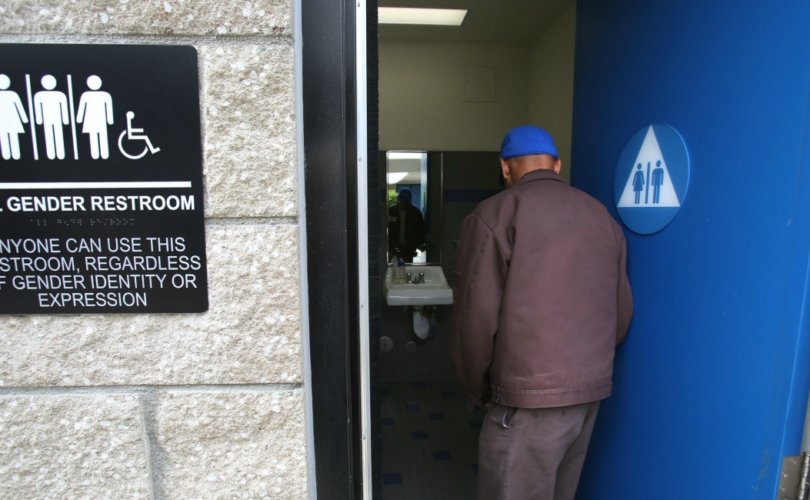 Obama is championing the insanity of eliminating the traditional definition of gender. Peggy Peattie/Zuma Press/Newscom

May 17, 2016 (Daily Signal) — President Barack Obama, the titular head of the LGBT movement, has added to the firestorm of confusion, misunderstanding, and fury surrounding the transgender bathroom debate by threatening schools with loss of federal funding unless they allow students to join the sex-segregated restroom, locker room, and sports teams of their chosen gender, without regard to biological reality.

His action comes after weeks of protests against the state of North Carolina for its so-called anti-LGBT bathroom bill.

As someone who underwent surgery from male to female and lived as a female for eight years before returning to living as a man, I know firsthand what it’s like to be a transgender person—and how misguided it is to think one can change gender through hormones and surgery.

And I know that theNorth Carolina bill and others like it are not anti-LGBT.

“L” is for lesbian. The bill is not anti-lesbian because lesbians have no desire to enter a stinky men’s restroom. Lesbians will use the women’s room without a second thought. So the law is not anti-L.

“G” is for gay. Gay men have no interest in using women’s bathrooms. So the law is not anti-G.

“B” is for bi-sexual. The “B” in the LGBT have never been confused about their gender. Theirs is also a sexual preference only that doesn’t affect choice of restroom or locker room.

“T” is for transgender. The “T” identifies a person who has undergone hormone therapy and gender reassignment surgery, and legally changes the gender marker on his or her birth certificate.

The North Carolina law is not anti-T because the law clearly states that the appropriate restroom is the one that corresponds to the gender stated on the birth certificate. Therefore, a transgender person with a birth certificate that reads “female” uses the female restroom, even if the gender noted at birth was male.

So, you see, the law is not anti-LGBT. What then is all the uproar about?

What has arisen is a new breed emerging among young people that falls outside the purview of the LGBT: the gender nonconformists.

Gender nonconformists, who constitute a miniscule fraction of society, want to be allowed to designate gender on a fluid basis, based on their feelings at the moment.

I call this group “gender defiant” because they protest against the definition of fixed gender identities of male and female. The gender defiant individuals are not like traditional transgender or transsexual persons who struggle with gender dysphoria and want hormone therapy, hormone blockers, and eventually, reassignment surgery. The gender defiant group doesn’t want to conform, comply, or identify with traditional gender norms of male and female. They want to have gender fluidity, flowing freely from one gender to another, by the hour or day, as they feel like it.

Under the cover of the LGBT, the anti-gender faction and its supporters are using the North Carolina bathroom bill to light a fuse to blow up factual gender definitions.

Obama is championing the insanity of eliminating the traditional definition of gender. He does not grasp the biological fact that genders are not fluid, but fixed: male and female.

Using the power of his position to influence the elimination of gender, overruling science, genetics, and biblical beliefs, is Obama’s display of political power.

One fact will remain, no matter how deep in the tank Obama goes for the gender nonconformists, genetics and God’s design of male and female, no matter how repugnant that is to some, cannot be changed. Biological gender remains fixed no matter how many cross-gender hormones are taken or cosmetic surgeries are performed. No law can change the genetic and biblical truth of God’s design. Using financial blackmail to achieve the elimination of gender will become Obama’s ugly legacy.