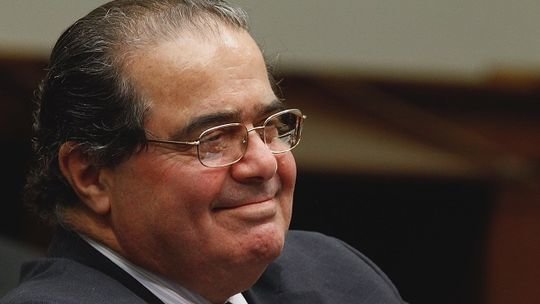 February 15, 2016 (AlbertMohler) — “Presidents come and go, but the Supreme Court goes on forever.” So advised a man who ought to know, William Howard Taft. After serving as President of the United States, Taft went on to serve — probably more effectively — as Chief Justice of the United States. But, if the Supreme Court goes on forever, justices do not. Americans were reminded of this truth on Saturday when news broke that Justice Antonin Scalia had been found dead in Texas, where he had gone on a hunting trip.

Scalia’s significance lies in his commitment to originalism, also known as textualism — the belief that the Constitution of the United States is to be read and understood and applied in keeping with the language, syntax, and vocabulary of its text as understood to be intended by the framers. This was how the Supreme Court had operated for decades, without even having to express originalism as a method. All that changed in modern decades as the Court and the nation’s liberal legal culture adopted an understanding of the Constitution as an evolving document that was to be interpreted in light of current social needs — even if this required the abandonment of the Constitution as a regulative document.

Progressivists, as they styled themselves, argued that the Constitution is to be interpreted as a “living” text that can be made to mean whatever modern jurists and legal theorists want the text to mean. As Scalia would later explain, judges had grown accustomed to remaking the world in their own image, abandoning constitutional government.

This process began earlier than even most conservatives recognize. One of the earliest proponents of this trajectory was President Woodrow W. Wilson. By the time Antonin Scalia arrived at the Harvard Law School in the late 1950s, the idea of the “living” Constitution was established orthodoxy.

In the 1960s the Supreme Court invented an individual “right to privacy” that was used to overturn state laws against birth control. In 1973, the same argument was used by the Court’s majority in the Roe v. Wade decision legalizing abortion. In 2003, the Court struck down laws criminalizing sodomy and in 2013 and 2015 the Court issued rulings that eventually legalized same-sex marriage throughout the nation.

Even before his nomination to the Supreme Court in 1986, Antonin Scalia was known for his brilliant defense of originalism and what was often called a “strict constructionist” reading of the Constitution — though he preferred to call his approach “textualism.” Put simply, Scalia argued that the American commitment to democratic self-government required that the Constitution be honored as the nation’s authoritative text. He firmly believed in the right of the people to establish a constitutional government that would recognize the ultimate authority of the people, not an elite of unelected judges, to establish laws.

As he often said, his concern was not necessarily what policy the people should adopt through electing representatives who would produce legislation. His concern was who decides. It should be the people through their elected representatives, not an elite of judges. “Persuade your fellow citizens it’s a good idea and pass a law. That’s what democracy is all about. It’s not about nine superannuated judges who have been there too long, imposing these demands on society,” he warned.

In his remarkable and haunting dissent to the 2015 Obergefell decision legalizing same-sex marriage, Justice Scalia made this point emphatically: “This is a naked judicial claim to legislative–indeed super-legislative–power; a claim fundamentally at odds with our system of government.” He continued: “A system of government that makes the people subordinate to a committee of nine unelected lawyers does not deserve to be called a democracy.”

He was often most eloquent in dissent and prophetic in his warnings. He warned that the Court’s 2003 decision in Lawrence v. Texas would mean “the end of all morals legislation.”

If the people believe that same-sex marriage should be legal, then let them elect legislators who will accomplish that by law, Scalia urged. He advocated the same for abortion and endless other issues. He was stalwartly opposed to judges usurping political authority for themselves — though he fully understood that the Supreme Court’s majority intended to do just that. He also understood that the Constitution operated as a necessary restraint upon political impulses: “A Constitution is not meant to facilitate change. It is meant to impede change, to make it difficult to change.”

Scalia could be withering in argument, but was known as a jovial personality. His best friend on the Court was perhaps its most liberal member, Justice Ruth Bader Ginsburg. With brilliant clarity, he once explained, “I attack ideas. I don’t attack people. And some very good people have some very bad ideas. And if you can’t separate the two, you gotta get another day job.”

He also understood that his approach to the Constitution would not always lead to comfortable conclusions. “If you’re going to be a good and faithful judge,” he said, “you have to resign yourself to the fact that you’re not always going to like the conclusions you reach. If you like them all the time, you’re probably doing something wrong.”

In 2009 he explained his understanding of the role of a justice in these words:

“We don’t sit here to make the law, to decide who ought to win. We decide who wins under the law that the people have adopted. And very often, if you’re a good judge, you don’t really like the result you’re reaching.”

History will record that Antonin Scalia influenced an entire generation of judges and justices and legal theorists. After Scalia, no one could ignore the originalist argument, even if they rejected it. But, at the same time, history may record Scalia’s brilliant effort as a failed project. The political reality is that we are unlikely again to see the appointment and confirmation of an originalist and constitutionalist like Antonin Scalia in the foreseeable future. President Barack Obama, a pronounced advocate of the progressivist cause, is almost sure to nominate a liberal to the vacancy. The Senate, which bears the responsibility to advise and consent, is unlikely to confirm that nominee, given the fact that this is an election year and the Senate is so split along partisan lines.

This sets up a battle royal between Republicans and Democrats in the Senate and beyond. The implications for the 2016 presidential race are urgent and explosive. Given the Supreme Court’s central role in almost every American controversy — part of the inheritance of the progressivist agenda — the future of the Court will be central to the presidential election. It has to be. The stakes for the nation are so very high. Antonin Scalia will be dearly missed and he may be virtually impossible to replace.

Christians must also remember that Justice Scalia’s understanding of the proper reading of the Constitution as a text is directly relevant to the church’s proper reading of Scripture. The same liberal theorists who propose reading the Constitution as a “living” and “evolving” text also propose that the Bible be liberated from its actual text and from the intention of its authors. Ultimately, this approach to the Bible, common to theological liberalism, denies the authority of God as the ultimate author of the Scriptures. It is no accident that liberal theology and liberal theories of the constitution emerged together in American public life.

Scalia’s worldview was shaped by his Roman Catholic faith, and he often scandalized liberals by making clear that he believed in the virgin birth and bodily resurrection of Christ and threw their unbelief back at them:

“For the Son of God to be born of a virgin? I mean really. To believe that he rose from the dead and bodily ascended into heaven. How utterly ridiculous.”

“God assumed from the beginning that the wise of the world would view Christians as fools, and he has not been disappointed.”

In his classic 1997 essay explaining textualism as the proper approach to the Constitution, Justice Scalia wrote these words:

“The American people have been converted to belief in The Living Constitution, a ‘morphing' document that means, from age to age, what it ought to mean. And with that conversion has inevitably come the new phenomenon of electing and confirming federal judges, at all levels, on the basis of their views concerning a whole series of proposals for constitutional evolution. If the courts are free to write the Constitution anew, they will, by God, write it the way the majority wants; the appointment and confirmation process will see to that. This, of course, is the end of the Bill of Rights, whose meaning will be committed to the very body it was meant to protect against: the majority. By trying to make the Constitution do everything that needs to be done from age to age, we shall have caused it to do nothing at all.”

I fear that Justice Scalia was absolutely right in that analysis. We must pray that he was wrong.