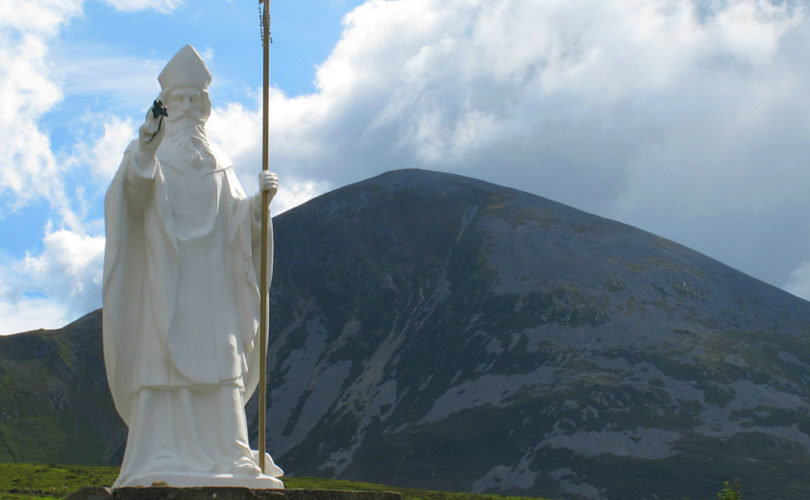 Editor's note: This sermon was preached on Sunday by Dom Mark Kirby, O.S.B., at Silverstream Priory in County Meath, Ireland. Dom Kirby reflects on Ireland's “national apostasy” in the wake of the country's vote to legalize abortion.

May 29, 2018 (LifeSiteNews) – The Preamble to the Constitution of Ireland. In the Name of the Most Holy Trinity, from Whom is all authority and to Whom, as our final end, all actions both of men and States must be referred, We, the people of Éire, humbly acknowledging all our obligations to our Divine Lord, Jesus Christ, Who sustained our fathers through centuries of trial, gratefully remembering their heroic and unremitting struggle to regain the full independence of our Nation, and seeking to promote the common good with due observance of Prudence, Justice, and Charity, so that the dignity and freedom of the individual may be assured, true social order attained, the unity of our country restored, and concord established with other nations, do hereby adopt, enact, and give ourselves this Constitution.

On this feast of the Most Holy Trinity, two days after Ireland’s national apostasy from the Holy Catholic Faith, how can we hear the Gospel that was sung just moments ago, and not recall the Constitution that the Irish people gave themselves 80 years ago in 1938? Friday’s vote was not about abortion only; it was about killing Ireland’s soul, about snuffing out all that made Ireland a beacon among the nations, about publicly renouncing all that, from the time that Saint Patrick kindled his blazing fire on the Hill of Slane, made this island home of ours a great welcoming Catholic hearth in a world grown cold and dark. Ireland was, among all the nations on earth, the one that unsparingly sent forth sons and daughters, intrepid in confessing the Holy Trinity, to bring the light of faith to the most far-flung corners of the globe.

And Jesus coming, spoke to them, saying: All power is given to me in heaven and in earth. Going therefore, teach ye all nations; baptizing them in the name of the Father, and of the Son, and of the Holy Ghost. (Matthew 28, 18)

How did we come to this? Among those who voted “Yes” on Friday, the vast number were baptized, and sealed with the sign of the Gift of the Holy Ghost in Confirmation. Some of these would have been confirmed but a few years ago. Among them were people who once knelt at the altar to receive the adorable Body of Christ, formed by the Holy Ghost in the womb of the Virgin Mary, immolated on the Cross, risen from the tomb, ascended into heaven, and returning in glory. Among them are people who, (and I say this with fear and trembling), will dare even to present themselves for Holy Communion today. To these, I can only repeat what the Apostle says:

One cannot say that we were not warned. God did send his prophets to Ireland. I think of Frank Duff. I think of Saint John Paul II who, in October 1979, was given a rapturous welcome. Pope Benedict XVI’s Letter to the Catholics of Ireland, written only eight years ago, was prophetic. What became of it? Why was it filed away and not heeded?

There are reports of victory celebrations in Dublin and elsewhere: a satanic crowing, jeers hurled at Our Lord, against His Virgin Mother, and against the Church. The whole climate is eerily reminiscent of France in 1789, of Mexico in 1910, of Russia in 1917, of Germany in 1933, and of Spain in 1936. Even worse than the crowds hell–bent on celebrating the choice of death over life are the complacent lies of those government ministers who, with a smug satisfaction, speak of A New Modern Ireland At Last, an Ireland of compassion, justice, and respect for women. The accent in all such discourses is that of the ancient serpent:

Now the serpent was more subtle than any of the beasts of the earth which the Lord God had made. And he said to the woman: Why hath God commanded you, that you should not eat of every tree of paradise? And the woman answered him, saying: Of the fruit of the trees that are in paradise we do eat: But of the fruit of the tree which is in the midst of paradise, God hath commanded us that we should not eat; and that we should not touch it, lest perhaps we die. And the serpent said to the woman: No, you shall not die the death. For God doth know that in what day soever you shall eat thereof, your eyes shall be opened: and you shall be as Gods, knowing good and evil. (Genesis 3, 1-5)

You will forgive me if I repeat today the words of the prophet Ezechiel:

What is remains for us? I will tell you what remains:

And now there remain faith, hope, and charity, these three: but the greatest of these is charity. (1 Corinthians 13, 13)

Draw near to the altar of the Holy Sacrifice, even as our forefathers drew in around the Mass Rocks. The altar is Ireland’s Divine Hearth. Not for nothing was the altar of the Lamb shown at Knock in 1879. Fall down in adoration and in reparation. Cry out to the Immaculate Mother of God, still Ireland’s Queen and Sorrowful Mother. My own dear father, with all the wisdom of his 91 years, said to me yesterday, “God has a plan. God will have the last word.” And what says Our Lord in today’s Gospel? He says this: “Behold I am with you all days, even to the consummation of the world.” (Matthew 28, 20). In this promise of His, let us rest all our hope.