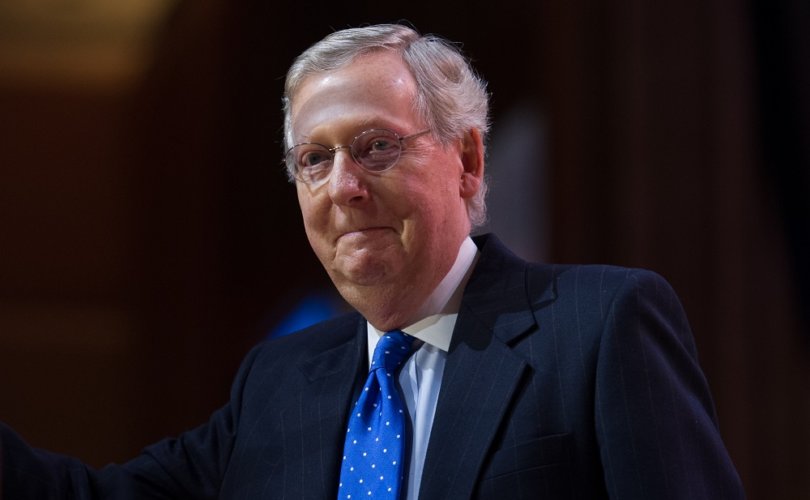 January 7, 2021 (American Thinker) — The soon-to-be minority leader of the Senate today lied to the American people when he said there was not sufficient evidence of fraud to overturn the election results or the certification votes of the Electoral College. There are mountains of evidence, especially from the six contested states. McConnell betrayed the president, his supporters, and his own constituents who only just re-elected him in November. His recent re-election is probably why he felt comfortable breaking faith with the 74 million Trump-supporters.

He will never be re-elected again. The same goes for each and every Republican in Congress who is afraid to stand up for what is right and true. Those are the ones who go to Washington to get rich, not to represent their districts. God forbid they ruffle the feathers of the media, the propaganda arms of the left. God forbid they not be invited to the D.C. cocktail parties for swells. They like being a member of the self-appointed elite. Once there, they lose all allegiance to “the people.” The same is now revealed, is true of Mike Pence, the V.P. we all thought was on the side of right. We were wrong.

Trump was and is different. He was and is the real deal, a man of and for the people. Nothing enrages the D.C. elite more than a true believer. He did things differently, better. He showed them up. He made the sick economy explode for everyone. He secured the border despite the constant pushback from the left. He engineered four peace deals in the Middle East. He did rebuild the military and transform medical care for our veterans. And he has the passionate support of the kind of people the left loathes.

Sure, they enjoy lives of luxury but rarely give any thought to the people who facilitate their privileged lifestyles: the truck-drivers, farmers, factory workers, gardeners, the servants they all employ. Those people are meant to be invisible to the likes of them, and they are. The governing elites have no respect for the millions of people who make their own lives so fabulously comfortable. They don't think their votes should count, so they made sure they did not count.

For four years, they planned Trump's defeat. Nothing would stand in their way this time, even if their cheating was made evident and obvious, which it was. And they're not even embarrassed. They're defiant. They may have stolen the Georgia Senate election just as they stole the presidential election, blatantly and fraudulently.

Now that they have secured the total takeover of America, the future, as Biden so aptly put it, means that “dark days are ahead.” Indeed, there are very dark days ahead. The left's hatred of Trump, bolstered by the left's illegal tweaking of the swing states' election laws, successfully fomented the most egregious vote fraud ever to occur in the United States.

The Democrats must be thrilled at the success of their swindle. The spineless right just capitulated as usual. There will likely never again be a free and fair election in this country. Who cares about this consequence of the left's cheating? Certainly not a single Democrat.

On the first day of the new Congress, they voted not to reform any election laws. Of course they did! They are all in on the cheating and proud of it. Why do they oppose any audits of the election? Isn't that clear to every American by now? If they wanted to prove that Biden won, wouldn't they support the recounts, the audits? Of course, they would. But they do not because they all know they stole the election by nefarious means. Rather than prove that Biden's win was legitimate, they've chosen to embrace the lie. Those on the left and the right have chosen to embrace the lie that Biden won the 2020 election.

The capitulation of the Republicans in Congress may actually presage the end of America as founded, the left's goal for decades. While the left is Machiavellian, the right is infuriatingly naïve. The left abandoned any pretense of scruples long ago. The right pretends scruples exist at all in our government, even while they eschew them themselves.

Therein lies the explanation for the predicament in which we find ourselves. The left? Pathologically immoral quest for tyrannical power over others. The right? Moral but cowardly quest for equanimity as if it were an attainable state of being in the world today. We are at an impasse.

Mitch McConnell is the perfect representation of everything that is wrong with the Republican Party; with a few noble exceptions, they are the craven party. McConnell, like his like-minded colleagues of the spineless variety, is the reigning symbol of all that is wrong with the GOP. He is loyal to no one but himself and his equally docile, go-along-to get-along anti-Trump Republicans.

If this crowd thinks it will politically benefit from their treachery, they are in for a surprise.

This once great nation is now becoming a third-world nation in which all elections are rigged. The Soviet Union (“It's not who votes, it's who counts the votes.” —Stalin), Castro's Cuba, and Chávez's/Maduro's Venezuela are frightening precedents. The list of murderous Marxist regimes throughout the world is long and genocidal. This is the path that apparently half of the population of the United States has now embraced. Forgive them, for they know not what they do. But these know-nothings may well be the death of us all.