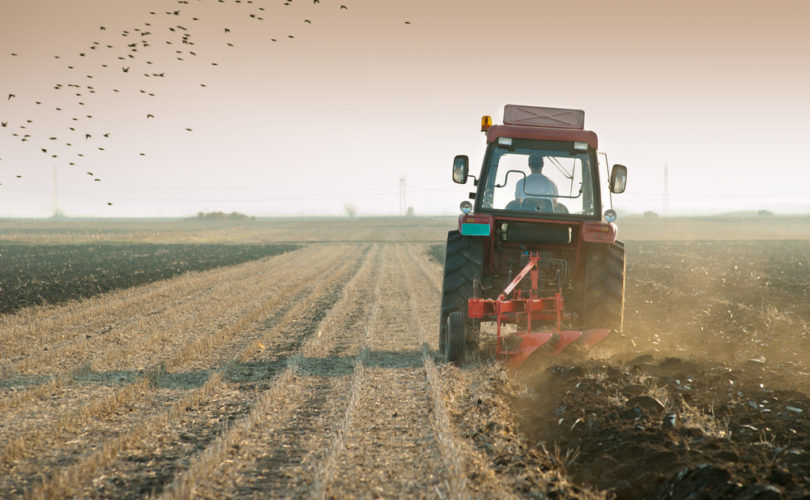 Between 2005 and 2012, Jason Brown lived what many people would consider to be the American dream. He was a starting NFL offensive lineman, first with the Baltimore Ravens and then with the St. Louis Rams.

Then he did what many would regard as unthinkable: He walked away from another potentially big contract to become . . . a farmer. But not just any kind of farmer. Brown became the kind of farmer who embodies what it means to be thankful.

After the Rams released him in 2012, other NFL teams contacted Brown about coming to play for them. He was only 29 years old and could have easily played another two or three years and made millions more.

Instead, he told his agent that he was through with football and was ready to pursue his real dream: becoming a farmer. His agent said he was “making the biggest mistake of his life.”  Brown’s reply was “No, I’m not.”

Making the story even more difficult to fathom was that Brown had not grown up on a farm—his father had been a landscaper who took his son with him on jobs. Brown planned on learning how to farm from—are you ready for this?—YouTube and the internet, plus whatever advice other farmers might be willing to give.

If this story sounds a bit quixotic—a colleague of mine says that the 1960s sitcom “Green Acres” came to mind when reading about Brown—there was nothing starry-eyed or impractical about Brown’s motivations. As he told the Raleigh News-Observer, “I want to help people.”

When he looks out at his 1,000-acre farm, he sees “youngsters learning how to fish” in its ponds, and fields “dedicated to providing fresh produce to shelters and food pantries.”

As any farmer can tell you, things don’t always go according to plan. Thus, “Many of the squash and cucumbers he had planned to give away were not harvested this summer because of heavy rains.” Similarly, “The apple, plum and pear trees need time to mature.”

But earlier this month, he harvested his first crop: five acres of sweet potatoes, fifty tons, which he promptly gave away. As Rebecca Page of the Society of St. Andrew, told a North Carolina television station, “”It's unusual for a grower to grow a crop just to give [it] away.”

You’ve probably guessed what motivates Jason Brown. If you haven’t, here’s a clue: his farm is named “First Fruits.” Brown’s former Rams teammate, All-Pro wide receiver Tory Holt, recalls Brown as “always being very strong in his faith.” According to Holt, Brown “was very encouraging to everyone.”

After his playing days were over, Brown decided that “it was time to start giving back . . . God has blessed us with this place,” he said, “and I am to be a steward, to use all these good things to help other people.”

And we are thankful for his example, which should serve as an encouragement to us all.

On behalf of John Stonestreet and the staff of BreakPoint, I wish you and yours a very happy Thanksgiving.