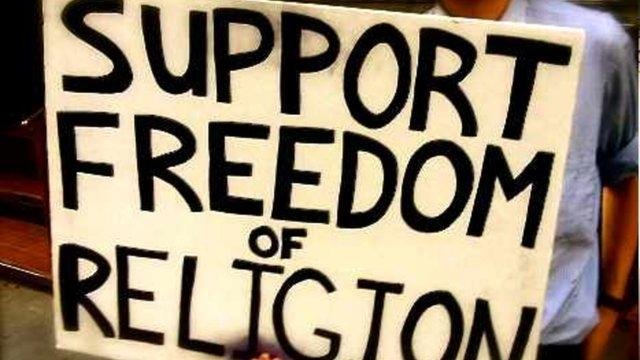 Last week I told you that Houston’s Mayor, Annise Parker, demanded to see the sermons of a group of five pastors and threatened them with a subpoena. Why? Because the pastors had objected to a new so-called “equal rights” ordinance that would allow self-identified “transgendered” men to use women’s restrooms.

That’s an issue all its own. But as bad as that is, the Houston mayor’s shocking and outrageous trampling on the religious liberty of these pastors is far, far more disturbing.  In fact, for someone in government to demand that pastors turn over their sermons is almost beyond belief. I confess I almost thought I was reading something out of my own book on Dietrich Bonhoeffer, where I describe how the Gestapo tried to harass and intimidate Martin Niemoller and other German pastors speaking the truth from their pulpits.

But this happened in America, a country that was founded on religious liberty.

Now let me be clear:  I don’t like to get people excited over nothing. But if ever there was a time to get excited—if ever there was a time to stand up and shout—folks, this is it. The Houston Mayor’s office has crossed a bold red line—and it has walked all over religious freedom in an act so brazen that it demands a response. And not just for religious liberty. Religious liberty is the canary in the coal mine. If this inexcusable act goes unanswered, it will open the door to government threatening other liberties. So this is not just about Christians and the church in America—it’s about all Americans. And it’s about America itself.

So if we don’t act on this, we can’t complain when we lose further liberties and eventually we aren’t able to act at all. This is our chance. Whatever voice and liberties we have now, we must use.

So what am I suggesting we do? Well, my friends at the Ethics and Religious Liberty Commission had a great idea. They urged pastors all across America to send their sermons to the Houston Mayor’s office. In fact, why don’t we all send sermons? But then I had another idea: we should send Bibles as well.

Why Bibles? Because we need to say that this is the Word of God and in America it is not subject to governmental oversight or regulation. Those who value this book answer to a higher authority than the State. I’m happy to say that I emailed my thoughts to Mike Huckabee, and he repeated the call on his TV show Saturday.

I’ll have that address of the Mayor's office in a moment, but won’t you please join us and send a sermon or a Bible or even a card with a scripture verse to Mayor Parker? Pray over it and send it in love. Pray that God would show Mayor Parker and every politician in America that religious freedom is sacred and we cannot allow the State to trample upon it — and by God’s grace, we won’t.

As I've said, the church has to answer this mayor's outrageous and deeply un-American action. We've got to forcefully remind those in government that the church in America has been free since 1776—and the Founders intended it to stay that way. And we do too.

Just recently I was jogging along the Charles River in Newton, Massachusetts, not far from Boston—the “Cradle of Liberty”—and near Lexington and Concord. And I was thinking about when Paul Revere rode through the night, sounding the alarm. In a way that’s what this is. We must do the same—sound the alarm.

So please do send a sermon or a Bible. And please do it if you can TODAY. The address is: Mayor Parker, City Hall, 901 Bagby Street, Houston, TX 77002.

Reprinted with permission from Break Point