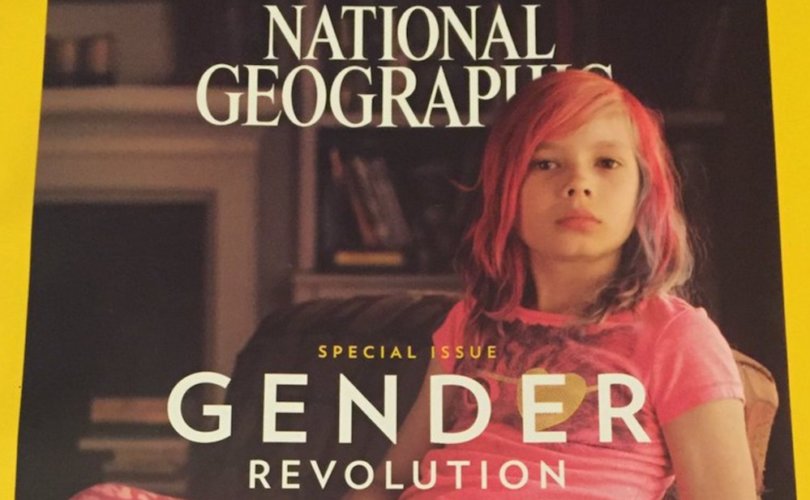 January 12, 2017 (ThePublicDiscourse) —  Psychiatrist Richard Corradi calls transgenderism a “contagion of mass delusion.” As a former transgender, I can tell you that Dr. Corradi is correct. Yet National Geographic magazine selected a trans-activist boy named Avery Jackson for the cover of its special January “Gender Revolution” issue—an image and publication that will only help promote this “contagion of mass delusion” around the globe.

Like it or not, there are two sexes: male and female. Man and woman join to form the foundation of family. National Geographic apparently felt the need to give the LGBTQ movement a helping hand in redefining gender and family.

If you’re an LGBTQ loyalist, you will love the “in your face” cover photo of the boy Avery. But for me, one who was restored after living for eight years as a female transgender, the cover photo is a sad and painful reminder of a lost childhood, a family ripped apart, and a marriage that did not survive. To me, the cover is a glossy reminder of the brokenness of transgender ideology.

The cover photo of Avery, like all photos, shows one moment in time. What it does not give us is a long-range perspective of the consequences of Avery’s choices and those of his parents. It cannot show us his future.

I lived “the life,” just like Avery. I was a cross-dressing boy at age nine, but—after years of pain and self-delusion—my cross-dressing stopped decades later, when I realized that the idea of changing sexes is pure fantasy. Cross-dressing initially felt zany, fun, exhilarating, and wonderfully affirming of my belief that I should have been born a girl. But after many decades of trying to comprehend the gender confusion that persisted even after my sex transition, I came to understand that my grandmother’s cross-dressing of me was emotional child abuse. The psychological harm grew as years went by.

The transgender promotional cover photo of Avery fails to address the 41 percent of the transgender population who will at some point attempt suicide. Even when affirmed, accepted, and loved, transgender individuals attempt suicide, which indicates that the issues they struggle with run deeper than a change in gender identity can rectify. Sex reassignment has not proven to be effective in resolving gender dysphoria for nearly half of this diverse population of gender-troubled individuals.

A review of 100 research findings concludes that sex changes are not effective, and many transgender people after surgery remain traumatized to the point of suicide.

This National Geographic cover is slick work, as it attempts to legitimize cross-dressing. Calling it “transgenderism” sounds more current than “cross-dressing,” but the reality remains the same.

Avery is simply a cross-dressing boy. Cross-dressing affects outward appearance only; what you do not see are the deeper long-term psychological consequences. No sex is changed; no biological transformation takes place.

Interestingly, in the glossary of the “Gender Revolution” issue, no mention is made of cross-dressing.

Yet, to promote their misguided ideological mission to deconstruct gender norms, the author-activists include the recently invented term for all of us non-transgender people, who number about 99.7 percent of the population: “cisgender.” In this way, the sexual activists are engaging in nihilism—dismissing human nature and observable reality itself.

Transgenderism is interesting in theory, but slicing up bodies and injecting hormones is pure Frankenstein 2.0. To treat gender dysphoria, a surgeon operates on a man and makes a “woman.” To keep up the façade, cross-gender hormones are prescribed for life.

Is the surgeon’s transgender female equivalent to a biological female? This argument requires some intellectual parallels.

Let’s compare a real diamond with a manmade cubic zirconia. Which one is a real gem? Or take a 20-dollar bill printed by Treasury Department of the United States and compare it with a counterfeit $20 made in the back room of Lefty’s bar. Which one is genuine?

With the extreme emphasis on political correctness and safeguarding people’s feelings, we are abandoning all ability to call what is fake “fake” and what is real “real.”

Yes, I enjoyed cross-dressing. Yes, the cross-dressing feelings were strong, delighting me when I slipped on that soft, full-flowing purple chiffon evening dress Grandma made especially for me. Yes, strong feelings of wanting to be a girl grew from seeing myself in the mirror. I believed I should have been born a girl and desired to be one. As a young person, I did not doubt I should have been a girl.

My delusional pursuit progressed over forty years from cross-dressing to cross-gender hormone therapy to surgery. I sought out a gender therapist who specialized in diagnosing gender dysphoria and approving people for gender reassignment surgery. But seeking him out was a mistake, because a gender therapist’s vision of treatment is narrowly focused on one destructive path: sex change.

In hindsight, I can see more clearly today than ever before.

I can see from my experience that transgenderism is fantasy motivated by strong feelings. When it comes to gender, people can change clothing and other aspects of the public persona, but biological sex will always remain fixed.

There are no lab tests or medical findings that can even prove the existence of transgenderism. The only way to diagnose it is when someone self-identifies as transgender. No amount of hormones or cosmetic surgery can effect a biological change of sex. Feelings, no matter how strong, cannot change sex. To pretend anything else is only a masquerade. At best, transgenderism is Mardi Gras, not reality.

Even if young Avery is willing to be used in this way, National Geographic’s cover photo is exploitation. The health and well-being of this child are being sacrificed to advance a political and cultural crusade.

Avery may not realize that his feelings and photos are a revenue source for National Geographic and a strategic tool for the LGBTQ lobby. Yes, the bright lights are squarely on Avery. He is today’s poster child—a hero, at least for now. But Avery’s male sex is unchangeable, while feelings do change. What will surface eight, ten, or even thirty years from now? Anyone who thinks that affirming his transgenderism can undo Avery’s innate male sex has caught the contagion of mass delusion.

Avery’s mom surely thinks she is helping her son, just as my grandmother thought she was “helping” me. Today, my body bears the scars from all the unnecessary surgeries I endured because as a young boy I was enabled, encouraged, and provided opportunity to act out such a fantasy.

It is naïve to believe there are no negative outcomes from using this young boy as a symbol and presenting him as an activist. National Geographic’s irresponsible imagery of a cross-dressing boy on the cover will no doubt ratchet up the spread of the contagion that is transgenderism.

Notably, the magazine does not include any interviews with individuals who have had their lives destroyed by the long-term consequences of cross-dressing and gender confusion. Cross-dressing eroded my true gender which in turn ruined my teen years, ripped apart my marriage, and ended my career.

There Is a Way Back

Avery and I have something in common: the strong belief starting in childhood of being a girl.

What makes me different from Avery is seventy years of life experience dealing with the transgender fantasy. Experience is a great teacher. I learned that sex-change surgery and living the life of transgender female didn’t deliver the serenity I was promised. Instead it complicated matters. Every day I had to confront the reality that I was not a real woman.

Many do not have the desire or courage to admit that transgenderism is delusional and was never required medically to resolve their gender conflict. I, on the other hand, wanted my sanity restored. Admitting my regret made me rare in trans-land.

I turned to Christ and away from transgenderism. I wanted to be obedient to the Lord. Obedience is giving up what I want, in order to live the life Christ wants. I had to stop living in defiance of God and stop demanding that the church, God, and everyone else make accommodations for my delusions. Demanding that people use my preferred female pronoun was childish.

I must have been right about obedience, because once I gave up what I wanted, He drew me to a new level of sanity. Through prayer and counseling, I was unshackled from my transgender female life and restored to life as male.

The LGBTQ movement and their co-conspirator, National Geographic, throw open the wide gate that leads to transgenderism and seeks the destruction of gender persona. But gender acquired through hormones and surgery is a delusional pursuit, and the delusion is contagious. Promoting Avery’s situation as a success story will hurt others who are struggling, because it advances the false idea that embracing transgenderism will solve the issues they face and heal the pain they feel.

I determined to be one of the few who find the narrow way that leads to a redeemed life. My faith was rewarded with a redeemed life in my male gender, far better than transgenderism. Yes, that makes me very different—and very richly blessed.