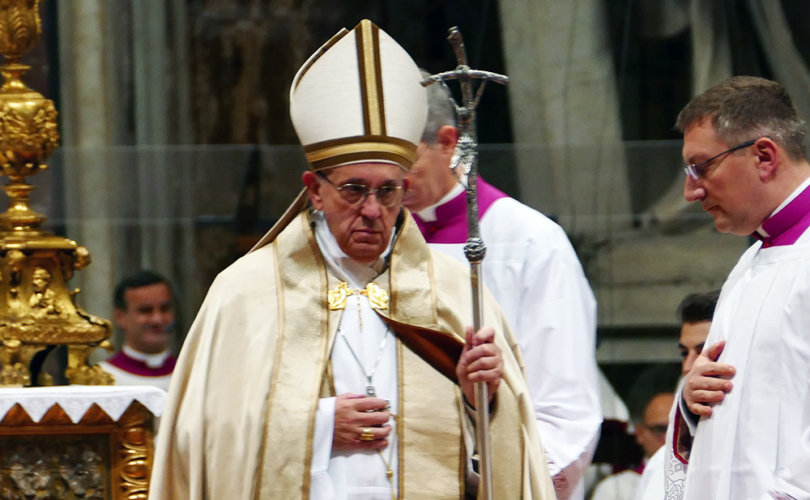 July 20, 2021 (The Catholic Thing) – Pope Francis’ decision in his motu proprio Traditionis Custodes [TC] to revoke the permissions granted by Popes John Paul II and Benedict XVI, is shocking for those of us who have appreciated and benefitted from the freedom to experience the spiritual richness of the Extraordinary Form [EF] of the Mass. The Novus Ordo Mass of Pope Paul VI is, in name and by design, precisely a new order of the Roman Mass which eliminated various elements of the previous missal and added new elements. Judgments can and should be made as to the objective value of what was left out, and what was added. That debate has gone on since the Novus Ordo was promulgated.

It’s not surprising that those who disagree with various decisions made in reforming the Mass after the Second Vatican Council sought from the Holy See the retention of the previous liturgical forms, at least as an alternative to the reformed rites. That request sprang from a desire not to lose what has been handed down to the faithful from time immemorial. The post-conciliar reformers of the Mass and of the other liturgical books intentionally did away with a great number of prayers and rituals. Those who love those now discarded elements protested, and their pleas were mercifully heard by John Paul and Benedict.

Why has Pope Francis done this? In the Letter that accompanies the motu proprio, he states: “An opportunity offered by St. John Paul II and, with even greater magnanimity, by Benedict XVI, intended to recover the unity of an ecclesial body with diverse liturgical sensibilities, was exploited to widen the gaps, reinforce the divergences, and encourage disagreements that injure the Church, block her path, and expose her to the peril of division.”

He’s troubled by what he sees as an “instrumental use of Missale Romanum of 1962 [that] is often characterized by a rejection not only of the liturgical reform, but of the Vatican Council II itself, claiming, with unfounded and unsustainable assertions, that it betrayed the Tradition and the ‘true Church’.” He later restates his motivation: “A final reason for my decision is this: ever more plain in the words and attitudes of many is the close connection between the choice of celebrations according to the liturgical books prior to Vatican Council II and the rejection of the Church and her institutions in the name of what is called the ‘true Church’.”

The pope’s decision is based, in short, upon his evaluation of the motives and actions of “many” people who choose to attend (or celebrate) the EF Mass. They are somehow “exploiting” and “instrumentalizing” that Mass to reinforce divergences in the Church, encouraging disagreements that risk dividing the Church. They reject the liturgical reform, Vatican II, the Church and her institutions.

Even granting that this is an accurate description – which I do not think is true – is the proper response to the abuse of something good in and of itself the suppression of that good? Isn’t the proper response to address those supposed attitudes by engaging in a serene and respectful dialogue that seeks mutual understanding and common commitment to striving for what is good for the Church?

Now, because some people who like the EF Mass do not share an enthusiasm for the new liturgical forms and raise questions about the proper interpretation of Vatican II, TC mandates that no one will be allowed to attend this Mass in their parish church from now on. Isn’t that overkill? We do not shut down a university when some students cheat on exams or skip lectures, hanging around for four years to get a diploma. Better to identify and correct the cheaters and slackers and let everyone else carry on.

Pope Francis sees the previous generous permissions for the celebration of the EF Mass as having wounded the unity of the Church by setting aside “a single and identical prayer,” that expressed her unity: “This unity I intend to re-establish throughout the Church of the Roman Rite.” He thus instructs the bishops that, when authorizing the use of the 1962 Missal, they are “to proceed in such a way as to return to a unitary form of celebration.”

What does he mean? “Indications about how to proceed in your dioceses are chiefly dictated by two principles: on the one hand, to provide for the good of those who are rooted in the previous form of celebration and need to return in due time to the Roman Rite promulgated by Saints Paul VI and John Paul II, and, on the other hand, to discontinue the erection of new personal parishes tied more to the desire and wishes of individual priests than to the real need of the “holy People of God.” (Emphases added)

Bishops are told to act in such a way “that your care and vigilance express communion even in the unity of one, single Rite, in which is preserved the great richness of the Roman liturgical tradition.” The question immediately poses itself: If the richness of the Roman liturgical tradition were in fact preserved in the new Rite, why do so many people not find it there? Having recently attended a Solemn Pontifical Mass in the Extraordinary Form, I can testify that the richness I encountered is largely absent from the new Rite. That absence was the intended aim of the liturgical reformers. The recovery and preservation of that richness is a worthy endeavor, no matter how flawed are the ideas of some who support it.

So the goal is clearly set forth: The faithful who up to now have attended the EF Mass are by that very fact contributing, whether they realize it or not, to disunity in the Church and they must “in due time” return to the Novus Ordo Mass, the “one, single Rite,” the “unique expression of the lex orandi of the Roman Rite.”

How long before the due time is reached? Who knows? In the meantime, on the path to achieving this unity, EF Masses are no longer allowed to be celebrated in parochial churches, thus segregating, if not banishing, some groups of the faithful – a truly contradictory way to bring about unity in the Church. It’s a strategy to get people ready for the total banning of the EF Mass.

But is this what the Church needs to be doing at this, or any other, time in history? My recent experience at the EF Pontifical Mass provides just one more strong motive for saying: “No.”