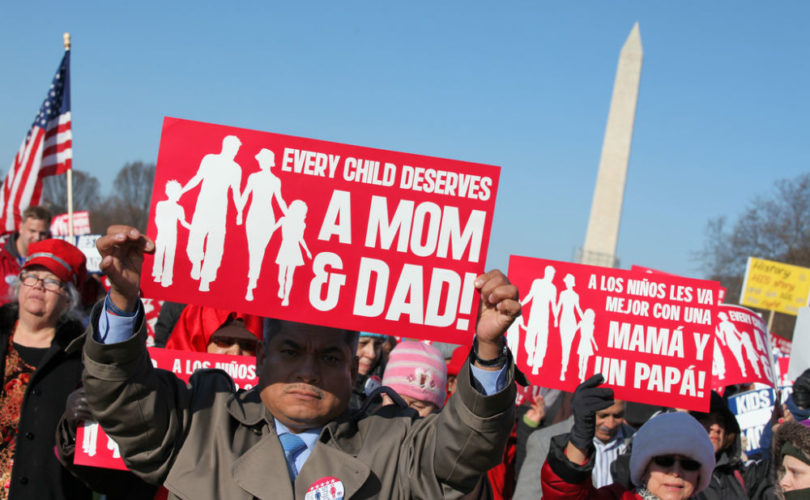 Every poll reveals that Americans are gradually shifting away from an understanding of marriage as being a lifelong union of one man and one woman, to one in which marriage is defined only by the whims of its participants. If we are going to safeguard the future of marriage – as defined by God and supported by Natural Law – and secure the healthiest environment for children to grow up, we cannot rely on our political leaders or the secular media to speak the truth about marriage and its importance.

On June 19, thousands of Americans from various religions, races and political parties participated in the 2nd annual March for Marriage in Washington, D.C. Participants and speakers called upon the executive, legislative and judicial branches of government to protect traditional marriage. As we reported shortly after the March, the opposition was much lighter this year, which made it a more peaceful event.

The reason we’re even having a conversation that ten years ago everyone said would not happen is that aggressive political activists are making the most of the secular relativism that has become the default morality of most Americans. On this view, religion, even if privately held by many, simply does not impact public life, or it should not. Hence, the percentage of Americans supporting same-sex unions has steadily grown from about 30% decade ago to nearly 60% today.

With the moral influence of religion waning, confusion about the most basic and important concepts abounds. If marriage is so good, why not extend it to same-sex couples? If heterosexual couples are allowed to marry the people they love, then why can’t same-sex couples have the same opportunity? The language of equality, justice and non-discrimination, divorced from any objective moral standpoint, is now used to stifle dissenting opinions and shut down conversation.

Contrary to what supporters of same-sex unions say, the public debate is not about the supposed denial of a “right” to marry, it is about the integrity of marriage and its social purpose. Even if you don’t hold, as the Catholic Church and other faith communities do, that marriage is a natural institution established by God, you should still be able to see that this is more than a merely private relationship.  If it’s only about how two (or more?) people feel about each other, then what is this whole conversation about? Marriage is not a private institution, but it is the event that forms the foundation of the first cell of society, the family. Family is where children learn values and virtues that enable them to be good citizens. This (formerly) common sense understanding is why marriage was recognized in law, because it was good for all that marriage be protected so that the next generation would have the best chance at contributing to the common good.

The debate hinges on whether or not we should change the definition of the fundamental natural and social institution. Love and commitment are necessary for marriage, but they are not sufficient. The union of a same-sex couple can never naturally bring about children. To make the argument that those opposed to same-sex unions are attempting to define love is erroneous. They are simply recognizing the fact that by its nature only one form of a loving relationship, the conjugal union of husband and wife, constitutes marriage.

We have already seen in court cases and in the news that those who would redefine marriage also intend to use their upper hand in law to suppress all dissent. In Europe, the vanguard of so much of the “progressive” agenda, churches are starting to have to defend themselves in court if they stand by their own moral teaching and refuse to sanction same sex unions. In America, those who admit that their movement is not really about ”marriage equality” as it is about destroying marriage itself receive thunderous applause for stating their true intentions.

This is a pivotal time for the future of marriage in the United States. It is up to us to show the world what marriage truly is, why it’s important and why it must be defended for generations to come. The defense of life and the defense of family are so deeply intertwined that they cannot truly be separated, even if at times we rightly focus on specific issues.