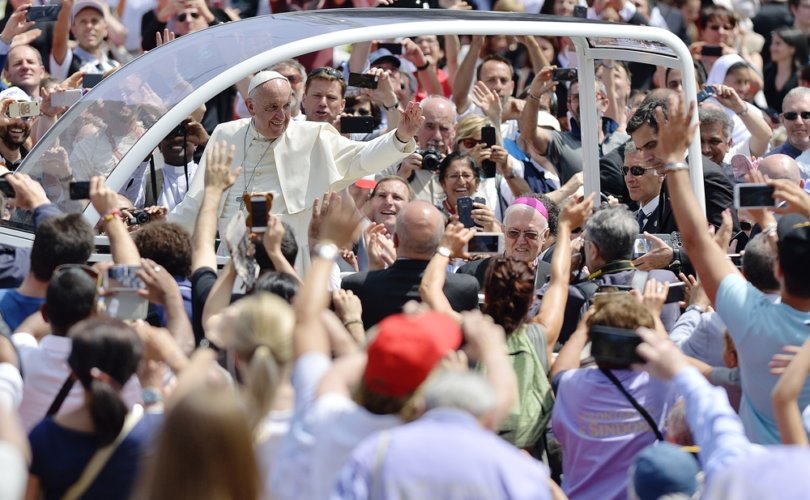 December 7, 2016 (OnePeterFive) — In recent days, Dean Pinto of the Roman Rota has “raged” repeatedly and somewhat loudly against the four courageous cardinals who – after a longer waiting period – saw themselves urged to make available to the world their own dubia concerning Amoris Laetitia (=AL), doubts which they had first presented only privately to the pope and to which he decided not to answer. The Roman Dean now sees in the cardinals’ conduct a form of insolence and a very inappropriate form of behavior toward the Vicar of Christ on earth. Then there is even his added talk about the life history of one of the carriers of doubt – here Cardinal Meisner is meant – over which there now purportedly lies a “shadow.” It is obvious now that the Roman Dean does not thus know the carefully defined relationship between conscience and obedience toward the ecclesial authority as it is grounded in Tradition. Pinto seems to be a representative of an unconditional obedience and of the disquieting papalism inherently connected with it.

As a theologian who has especially studied now for several years the lives of the Saints and their significance for our current time, I see it now to be more than fitting to turn our attention to two members of the “endless choir” [title of a book in German] who are able to correct with clarity the view of the canon lawyer Pinto: Joan of Orléans (1412-1431) and John Henry Newman (1801-1890). These radiant examples convey to us clearly and distinctly that the conscience – meant here is of course the well-formed conscience which is oriented toward God’s Commandments – has always priority. In addition, these two figures show us that a papalism of any kind is not at all Catholic. The pope is not the center of the Church. No, he is the “Servant of the Servants of God.” It is especially he who is – in the exercise of his service to the Universal Church – thus duty-bound to the unconditional validity of the Divine Law. Should he come not to have this duty any more clearly and distinctly in his mind, the Christians who see it in their consciences clearly and distinctly may then of course remind the pope of his duty. And our four courageous cardinals have done nothing else but that.

Let us now first look at Blessed John Henry Newman. He converted in 1845 at the age of 44 years for reasons of conscience, converting from Anglicanism to the Roman Catholic Church. This step must not have been easy for this Anglican priest who was deeply rooted in the Anglican tradition. But he recognized with the help of his theological research that the true Church of Christ can only be the Roman Catholic Church. What, then, can we learn from John Henry Newman? Especially the courage to make a conscientious decision! Famous and much-quoted is a passage from his “Letter to the Duke of Norfolk” (1874) in which he stresses the primacy of conscience: “If I … would have to make a toast to religion, I would drink to the pope. But first, I would drink to the individual conscience. Only then to the pope.” This famous toast of Newman first seems to us more unusual than it sounds; because it speaks – as Karl Rahner, S.J. himself has stressed – merely about “what is absolutely self-evident.” As Rahner said in September 1978 in Freiburg at the end of the first international Newman Conference held on German ground: “The Catholic Christian will say: ‘From the deepest life decision of conscience I accept and acknowledge this objective doctrinal authority of the Catholic Church as an external, but meaningful, and necessary, God-willed standard for my conscience; the recognition of this objective standard, however, is of course once again my own decision of conscience, which I make on my own account and at my own risk.’ You cannot, so to speak, hand over and deliver your conscience to someone else.” This is the decisive point: the love for the pope does not at all demand such an unconditional submission. This is not possible because God has already given to all of us a dignity which enables us to go the path of “acknowledgment” as described by Rahner. Here, we do justly speak of the right to the liberty of a well-formed conscience. In this hour of the Church, may Pope Francis listen to his Jesuit confrère, Rahner, and thus respect the decision of a well-formed conscience of the four cardinals.

No other than the now-retired Pope Benedict XVI has written as a young council theologian exactly in this sense when he commented on number 16 of the Pastoral Constitution Gaudium et Spes. Before hearing Ratzinger’s commentary, however, the Second Vatican Council itself shall speak: “In the depths of his conscience, man detects a law which he does not impose upon himself, but which holds him to obedience. Always summoning him to love good and avoid evil, the voice of conscience, when necessary, speaks to his heart: do this, shun that. For man has in his heart a law written by God Himself; to obey it is the very dignity of man; according to it he will be judged.” The debate concerning AL is exactly about this very defense of that Divine Law which is written into our hearts. Joseph Ratzinger later then commented on this wonderful Council text, as follows, and in a very elucidating way – with preceding explicit reference to the teaching on conscience of a John Henry Newman: “Above the pope as the expression of the binding authority of the Church still stands one’s own conscience which has to be obeyed first – if need be also against the demand of the ecclesial authority.” If need be also against the demand of the ecclesial authority! Listen! Listen! And such a case of emergency is what the four cardinals currently seem to have detected. They see the danger that the Church’s teaching on the indissolubility and sacramentality of marriage has been watered down by the pope in AL. They do not see, after all, any room for a situation ethics, however defined. No, for these men the Commandment of God stands unshakable: “Thou shalt not commit adultery!” In their own formation of conscience, these men have clearly and distinctly accepted this Commandment.  Exactly that is why they speak now thus. Against this act, Msgr. Pinto cannot, yes may not, object. If he does, he does not stand any more on the foundation of Catholic teaching concerning the conscience of man. He also does not have the right to oppress the conscience of the faithful. By no stretch of the imagination can I imagine that, in the whole Catholic world, there are only these four cardinals who have made such a well-formed decision of conscience. May each shepherd now arise who is being sincerely led by his well-formed conscience in this manner.

Let us finally take a look upon a figure who can speak to us especially now: St. Joan of Orléans. This holy virgin was condemned by a spiritual tribunal – by priests and prelates – to suffer the terrible death by burning because she had listened to “her voices.” Joan lived very intimately for years with certain Saints (especially St. Michael the Archangel and St. Catherine of Alexandria) and heard their voices. These voices determined her decisions of conscience. At the end, she was considered to be crazy, and she is an impressive example for how much the exercised authority of the Church also can err. Only centuries later, the great Pope Benedict XV effected the rehabilitation of St. Joan in front of the eyes of the world, that is, by canonizing her in the year of 1920. This saint was questioned with all kinds of trick questions by her judges at the [earlier 1431] hearing. One of them was about the papacy. It was the time of the Council of Constance, the time of the popes and the anti-popes. The Church was in a terrible state. Camps and splits were threatening everywhere. Thus she was asked whom she considers to be the legitimate pope. Let us shortly listen to the interrogation: “Interrogator: ‘What do you say about our Lord Pope, and of whom do you believe that he is the true pope?’ Answers Joan: ‘Are there then two? [….] I myself assume and believe that we have to obey our pope who is in Rome.’” This exchange is of much value for us today, and for many reasons. Joan did not live at the time of television, radio and the Internet. She most probably did not know what the concrete name of the pope was and how he looked.  Most probably, she had not the slightest idea of how turbulent things were in the Church of her time. But one thing she knew: he who sits on the Roman Episcopal Seat must be the lawful pope. What does this mean to us? We do not constantly have to check what the pope now says in his interviews and speeches. St. Joan’s example encourages us to be more unperturbed, also with regard to the current discussion about AL. It is sufficient to know that God takes care of His Church and that, until the day of His return, He has chosen the Bishop of Rome as His own Vicar. And we do have the duty to obey him, of course, but not unconditionally. We all are duty-bound to orient our conscience according to God’s Law and then to follow our thus-formed conscience. Let us turn our gaze again more toward Jesus Christ. Let us look at Him. Let us look, together with our Holy Father, to Christ and let us pray insistently that the Church in her entirety may clearly and distinctly take heed of the binding Law of God.

Dr. Büning was born 1966 in Ahaus (Westfalen, Germany). He studied Catholic Theology and Philosophy at the University of Münster. After graduating in 1990, he studied Law in Münster and München. He received his doctorate in Law in 2001 from the University of Münster. Among other things, he has worked as Academic Assistant at the Universities of Münster and Konstanz; as an administrative lawyer in several departments; and finally as the representative of the Mayor of Gronau (Westfalen). He has authored a number of books, with a recent focus on theological books concerning the lives of the Saints. In addition, he offers theological guided tours of several museums. Dr. Markus Büning is married and has two children. He lives with his family in Münsterland. Reprinted with permission from One Peter Five.