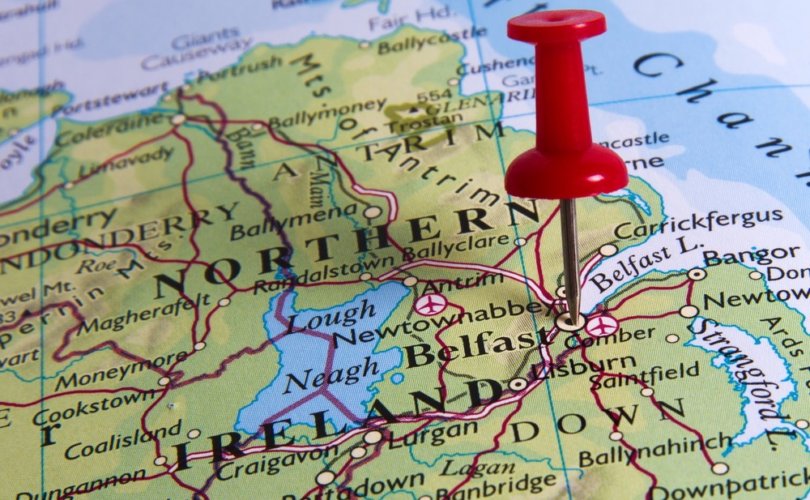 May 29, 2018 (LifeSiteNews) – Following last week’s referendum result in the Irish Republic, British Prime Minister Theresa May has come under renewed pressure to back new legislation to remove strict abortion laws in Northern Ireland.

In the wake of the overwhelming vote for abortion in Ireland’s referendum, the British Prime Minister faces calls from both sides of the UK’s House of Commons to resolve what pro-abortion critics call the “anomalous” situation in regard to abortion provision in Northern Ireland, which is politically part of the United Kingdom.

Britain’s 1967 Abortion Act was never extended to Northern Ireland. Abortion remains illegal there in all but the most extreme circumstances. In fact, as pro-abortion campaigners point out, Northern Ireland has the harshest criminal penalty for abortion anywhere in Europe; in theory life imprisonment can be handed down to a woman undergoing an unlawful abortion.

Following the outcome of the referendum in the south, the DUP leader and Northern Ireland’s First Minister, Arlene Foster, said the result “has no impact upon the law in Northern Ireland”. She pointed out that it was for the Northern Ireland Assembly to “debate and decide” whether to follow suit on what was a “devolved issue”.

Of course, legally Foster is correct. That said the impact of the vote from south of the Irish border on the North cannot be underestimated. In recent years there have been increasing calls from British politicians and pro-abortion groups to have the 1967 Abortion Act extended to Northern Ireland. The landslide result in the Republic’s referendum has given fuel to these calls, even if technically the Irish poll was a domestic matter in a foreign jurisdiction.

Sinn Féin are the second largest political party in Northern Ireland. Organized on an all island basis their political creed is one of agitating for an end to partition and the joining of Northern Ireland with the Republic in a unitary state. Traditionally, they have drawn support from Ireland’s Catholic population. In recent years, and evidenced nowhere more so than during the Republic’s recent referendum, Sinn Féin are strident in their demand for abortion provision to be available throughout Ireland – north and south. After the result in last week’s referendum was declared, Sinn Féin leaders held aloft a banner proclaiming: ‘The North is next!’

Shortly thereafter, the calls for abortion reform in Northern Ireland started in the media and also from British politicians.  It is not an issue that is going to go away for Northern Ireland’s politicians. And, although the DUP is wholly pro-life, they look increasingly isolated. They have few friends in British politics, fewer still in Irish politics, so for some the issue of abortion is merely a chance for political point scoring against the DUP.  For others, however, the Republic’s referendum has given the pro-abortion lobby in Northern Ireland some much-needed political propaganda.

Many have called on Prime Minister May to intervene and extend the 1967 Abortion Act to Northern Ireland. It is not clear she has the power to do so, and, in any event, she has made it clear that: “Friday's referendum has no impact upon the law in Northern Ireland, but we obviously take note of issues impacting upon our nearest neighbor”. She went on to add: “The legislation governing abortion is a devolved matter and it is for the Northern Ireland Assembly to debate and decide such issues.”

That said, after the Referendum result, May tweeted: “The Irish referendum was an impressive show of democracy which delivered a clear and unambiguous result. I congratulate the Irish people on their decision and all of #Together4Yes on their successful campaign.” Whatever her personal views on the subject of abortion reform in Northern Ireland, May is constrained, for now at least, from doing much more than sending congratulatory tweets to Irish pro-abortionists. This is especially so given the fact that she cannot afford to do anything to alienate the DUP.

The reason for this is a simple one. Following the 2017 General Election, May’s Conservative Government has no overall majority in the House of Commons. She needs the support of the 10 DUP Members of Parliament to ensure that her administration does not collapse. For that reason alone, a strange fluke of political history, Northern Ireland’s strict abortion laws look safe – for now at least.