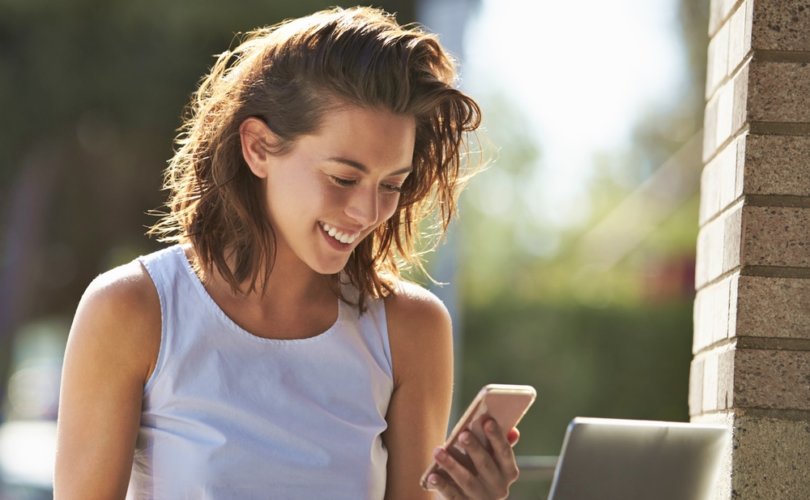 March 16, 2018 (LifeSiteNews) – As recently as the year 2010, less than 10 years ago, Planned Parenthood had an enormous marketing advantage over pro-life Pregnancy Help Centers.

At that time, the only way a Pregnancy Help Center could get the word out about its services to a significant number of women aged 18 to 29 years old, the age group that accounts for 70% of all abortions in the U.S., was to use traditional mass market media channels like TV, radio, billboards, and print (magazines and newspapers).

But a very important technology development started quickly working its way into our society a little after 2010, and is now so firmly entrenched within every demographic, and especially the millennial age group, that most of us probably don’t realize how big this change was.

What was the change? The adoption of smartphones and high bandwidth wireless plans by the vast majority of American consumers.

According to Pew Research, 100% of American millennials now own a cell phone, and importantly 94% of those cell phones are smartphones.

Why does this matter to the pro-life movement?

It matters because the old standard cell phone technology, combined with standard low bandwidth wireless plans, did not allow for a cost-effective way to reach consumers with advertising messages.

However, once affordable smartphones and high bandwidth wireless plans became the norm, especially within the millennial age group, it opened up an entirely new and very cost-effective way for marketers to reach them.

In place of expensive budget-busting mass media “broadcasting”, Pregnancy Help Centers now have the option to use very cost-effective “narrowcasting” to reach women in a specific geographic area using Google, YouTube, and Facebook.

No longer are Pregnancy Help Centers essentially “locked out” of reaching young women with advertising to make them aware about the help and hope available to them should they face an unexpected pregnancy.

No longer does Planned Parenthood have an overwhelming marketing advantage against Pregnancy Help Centers.

Here are two specific examples of how we at Heroic Media are reaching young women, redirecting them away from Planned Parenthood, and connecting them to local Pregnancy Help Centers.

First, for some women who discover that they are facing an unexpected pregnancy, they become afraid and believe that the only option available to them is an abortion. These women will do an internet search and when the search results appear, Heroic Media places a small advertisement that competes directly with Planned Parenthood’s advertisements. When women respond to our ad, they are redirected away from Planned Parenthood and into the compassionate care of a local pro-life Pregnancy Help Center in their area.

This tragic occurrence is a result of decades of Planned Parenthood investing in building its brand in the minds of young women, and on the opposite side, a significant lack of investment by Pregnancy Help Centers in building awareness about the help and hope available to women should they face an unexpected pregnancy.

This result is understandable given the cost required to build brand awareness using expensive mass media.

But now we have the opportunity to change that.

In March of 2017, Heroic Media began running 30 second video advertisements on Facebook and YouTube targeted specifically for viewing by women 18 to 29 years old in the top 10 largest cities in the U.S. The goal of these videos is to raise awareness about the existence of Pregnancy Help Centers, and the hope and help they can offer to young women.

You can see examples of these videos here:

Both of these advertising programs are bringing more women into Pregnancy Help Centers, saving countless preborn babies lives from abortion, and putting Planned Parenthood on its heels.

On Heroic Media’s website at https://heroicmedia.org, we post a new save story every weekday. Please visit our site to see how Pregnancy Help Centers are turning women away from Planned Parenthood and saving lives from abortion every day.