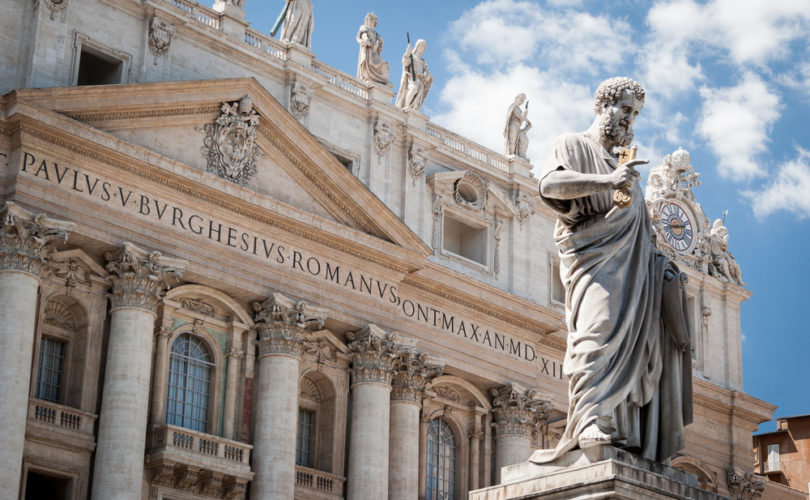 October 20, 2015 (VoiceoftheFamily) — The Instrumentum Laboris of the Extraordinary Synod on the Family, which was published in June 2014 and served as the agenda for last year’s synod, contained many problematic texts on the subject of the natural law. Paragraph 20 stated:

“In fact, what underlies the relationship between the Gospel of the Family and the natural law is not so much the defence of an abstract philosophical concept as the necessary relation which the Gospel establishes with the human person in the variety of circumstances created by history and culture.”

and paragraph no. 30 stated:

“The language traditionally used in explaining the term ‘natural law’ should be improved so that the values of the Gospel can be communicated to people today in a more intelligible manner. In particular, the vast majority of responses and an even greater part of the observations request that more emphasis be placed on the role of the Word of God as a privileged instrument in the conception of married life and the family, and recommend greater reference to the Bible, its language and narratives. In this regard, respondents propose bringing the issue to public discussion and developing the idea of biblical inspiration and the ‘order in creation,’ which could permit a rereading of the concept of the natural law in a more meaningful manner in today’s world.” (No.30)

These paragraphs, and others like them, indicate an extraordinary confusion about the reality of the natural law and the relationship between the natural and supernatural orders.

None of the more recent synodal documents make any reference to the natural law. The Relatio Synodi of the Extraordinary Synod and the Instrumentum Laboris of the Ordinary Synod make no reference to this fundamental underpinning of the Church’s understanding of human morality.

It is our conviction that the Church’s traditional understanding is accessible to all people in all ages. In this post we will present a short overview of the natural law according to the teaching of St Thomas Aquinas, the common doctor of the Church. We will begin by examining the nature of law itself; we will then be able to proceed to discuss the natural law in particular.

“It belongs to law” says St Thomas Aquinas “to command and to forbid”. He continues: “Law is a rule and measure of acts, whereby man is induced to act, or is restrained from acting.”

For example, a law may restrain a man from stealing by forbidding theft, or it may induce a man to pay his taxes by commanding him to do so.

Does law have to be in accord with reason?[2]

St Thomas tells us that “the rule and measure of human acts is reason”. This means that in order for an act to be truly human, it must accord with right reason. Man is distinguished from an animal, a plant, or an inanimate object because he alone “is master of his actions”. The plant instinctively grows towards the light, the animal instinctively flees from a predator or pursues its prey, but man is able to reason and make free choices.

It is on these grounds that St Thomas can assert that a command only has “the nature of law” if it is “in accord with some rule of reason.” Indeed he teaches that “a law is nothing else but a dictate of practical reason emanating from the ruler.”

It follows from this that all “laws” that are contrary to reason, such as those which permit abortion, are not true laws.

Is law always ordered to the common good? [3]

Law is always ordered to the common good. We have seen above that law must always accord with reason. St Thomas teaches that reason is principally ordered towards man’s final end, which is happiness. Therefore laws must be ordained principally to human happiness.

Every individual man forms part of a social whole; he is an imperfect part of a perfect society (the Church and the State are both perfect societies because they possess all the means to achieve their ends and are not subject to any higher authority in their sphere). Therefore law must be principally ordained to the good of the social whole, that is, to the common good.

Is anyone able to make laws?[4]

These laws must be promulgated by the lawgiver before they come into force.

God has created all things by His divine wisdom and, by His divine providence, He directs everything that He has created to its proper end. This divine reason, “the very idea of the government of things in God”, has, says St Thomas, “the nature of law.”

This law, which directs all things in the universe to their proper end, is the eternal law. The lawgiver is God and His eternal law has been promulgated by His Divine Word for all eternity.

What is the natural law?[6]

The eternal law, which directs all things to their proper end, also directs man to his proper end. Yet man, because he possesses intellect and will, is able to freely choose to act or to refrain from acting. How then does the eternal law direct man to his end?

As stated above, all things in the universe are ruled and measured by the eternal law. It follows from this that all things “partake somewhat of the eternal law”, that is, “from its being imprinted on them” so that from this “they derive their respective inclinations to their proper acts and ends.” We can see this in the way that plants respond to external stimuli, or animals to their instincts, or any object to the laws of physics.

This participation in the “eternal law” is called the natural law.

Are the precepts of the natural law self-evident?[7]

The first precepts of the natural law are self-evident. All men and women have the natural moral law “written in their hearts” to which their “conscience utters its own testimony” (Rm 2:15). “There is in every man a natural inclination to act according to reason.” The first principles of moral action are habitually present in the human intellect.

What are the precepts of the natural law? [8]

Firstly man shares with all created things an inclination to preserve his own being; “whatever is a means of preserving human life and of warding of its obstacles, belongs to the natural law.”

Secondly, there are those fundamental aspects of our being that we share not just with our fellow human beings but also with non-rational animals, “such as sexual intercourse, education of offspring and so forth.”

Thirdly, there are those things which pertain to our rational nature; “thus man has a natural inclination to know the truth about God, and to live in society: and in this respect, whatever pertains to this inclination belongs to the natural law.”

All of the precepts of the law of nature form just one natural law because all flow from the first precept: good is to be done and pursued and evil is to be avoided.

Is the natural law the same for all men?[9]

The natural law, as explained above, deals with those things to which human beings are inclined naturally.

All human beings share the same fundamental human nature. Therefore, as regards the general principles underlying human thought and action, “truth or rectitude is the same for all, and is equally known by all.”

The application of the general principles may vary according to the concrete circumstances in which men act, but the first principles themselves remain inviolable. Evil can never be done so that good results; the end never justifies the means.

Can the natural law be changed?[10]

The natural law, as we have seen above, is the imprinting of the eternal law on rational creatures. This law has remained the same since the very moment that the first rational creatures were created by God. It is “altogether unchangeable in its first principles.”

Laws may be added above and beyond the natural law, for example human laws that seek to serve the common good in concrete circumstances, but these laws can never negate the natural law.

Is it possible for the natural law to cease to exist in the heart of man? [11]

The first principles of the natural law can never be removed from the hearts of men. They remain forever “written in their hearts” (Rm 2:15).

On particular occasions however “reason is hindered from applying the general principle to a particular point of practice, on account of concupiscence or some other passion” and, as far as secondary precepts are concerned, “the natural law can be blotted out from the human heart, either by evil persuasions… or by vicious customs and corrupt habits”.