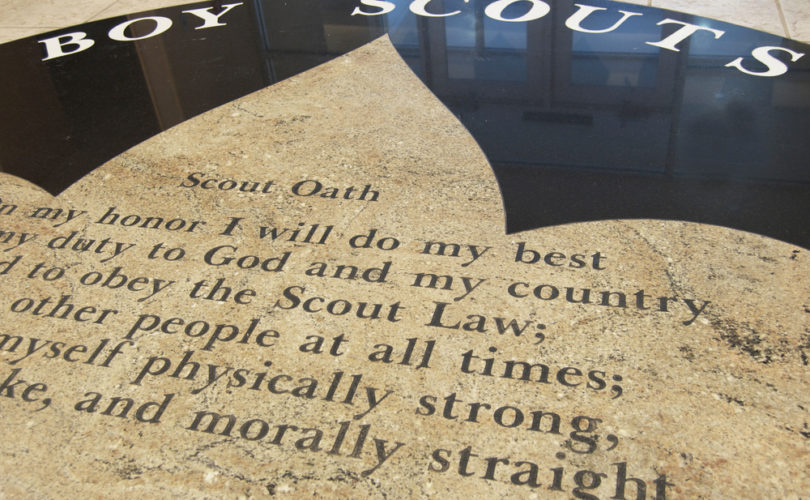 May 27, 2015 (AlbertMohler.com) — The Boy Scouts were doomed the moment the national leadership decided to preserve the organization at the cost of the values and ideals that gave it birth. Speaking to a national meeting of Boy Scouts of America leaders, President Robert Gates, former Secretary of Defense and former Director of the Central Intelligence Agency, called for the B.S.A. to abandon its policy of allowing the participation of openly gay scouts, but not the involvement of openly-gay adults.

Speaking in Atlanta, Secretary Gates told his fellow B.S.A. leaders that “we must deal with the world as it is, not as we might wish it to be.” Gates presented a matter-of-fact briefing to the leaders, speaking in entirely pragmatic terms. There was not a shred of moral insight or argument in his statement, other than his belief that the Scouts must do whatever is necessary, or face “the end of us as a national movement.”

Even as he took office last year, Gates indicated that he was not satisfied with the compromise the B.S.A. national board adopted in 2013. After insisting, just six months earlier, that the Scouts would not change their policy excluding openly-gay scouts and scouting leaders — a policy national leaders acknowledged was expected by the vast majority of scout parents — the national board crumbled under external pressure, largely from activist organizations and major corporations.

By any honest account, the policy adopted in 2013 was a compromise that anyone could see would not hold. By allowing for openly-gay scouts but not openly-gay adult leaders, the B.S.A. put itself in a no-man’s land of moral evasion. As recently as 2004 the Boy Scouts of America had maintained that homosexual conduct is “inconsistent” with the Scout Oath’s requirement that a scout be “morally straight.” By 2013 that policy — successfully defended all the way to the Supreme Court of the United States — was an embarrassment to some leaders and in some regions of the country.

But the 2013 policy was stranded in moral ambiguity. If there is nothing morally deficient with homosexuality, why allow gay scouts but not gay leaders? Furthermore, about 70 percent of all local scouting units are sponsored by religious organizations, who found themselves in the position of choosing between remaining loyal to the scouting organization or committed to their own religious convictions. Some decided to wait it out.

Predictably, the waiting is soon to be over. Gates indicated to the press that a decision is likely by October. The handwriting is on the tent wall, and the direction is set. The compromised policy of 2013 is about to be abandoned, with scouting at all levels, including adult leaders, to be open regardless of sexual orientation.

Back in 2013, those who demanded the full inclusion of gay scouts and leaders registered their dissatisfaction with the new policy. The editorial board of The New York Times called the new policy “an unprincipled position” — and they were right. As the editors pushed onward, they warned that the move “should hardly satisfy” the demand for full inclusion. Once again, they were clearly right. Both sides could see the compromise of 2013 was unprincipled and unsustainable.

Now, Secretary Gates proposes that the compromise be abandoned, accepting the inclusion of openly-gay leaders. His argument is entirely based on the self-preservation of the B.S.A. as a national organization. He made no moral argument at all. He did not celebrate the new policy he proposed on moral grounds, nor did he lament the loss of the older policy on moral grounds. There were no moral elements in his argument.

Tellingly, Gates referred to internal pressures from scouting organizations in several states that were openly defying the national ban on gay adult leaders, and he also made reference to the threat of lawsuits that, in his words, would threaten to “forbid any kind of membership standard, including our foundational belief in duty to God and our focus on serving the specific needs of boys.”

What Gates did not mention was the fact that the inclusion of openly gay leaders and scouts, along with the challenge that already comes from the feminism and transgender advocates, makes the very existence of the Boy Scouts ever more vulnerable.

The inescapable fact is that America is becoming a society in which the very idea of the Boy Scouts is increasingly implausible. The current leadership of the B.S.A. would supposedly save the Boy Scouts as an organization, but leave scouting in yet another unsustainable compromise.

That was made clear when Gates argued that the religious organizations that sponsor local units should remain free to establish their own criteria for adult leaders “consistent with their faith.” But Gates surely knows that this assurance is a very thin promise. Perhaps Gates hopes that the lawsuits will now be directed against churches, instead of against the Boy Scouts of America.

The moral disaster of the Gates proposal is matched by a legal and political disaster. Writing at The Washington Post, Sarah Kaplan and Michael E. Miller called the move by Gates “an astute capitulation,” but they also recognized the predicament Gates had made deepened:

Writing at National Review, Kevin D. Williamson nailed Gates for failing to make a moral argument, when the issue, regardless of the side one takes, is inescapably moral:

As Williamson argues, those who are committed to both sides of the argument over homosexuality are making a moral argument — and Gates is not. To the defenders of the Scout’s longstanding policy, Gates’s proposal is “understood as simple moral cowardice.” On the other hand, those who Williamson describes as taking “the more contemporary view of homosexuality” will see Gates’s position as “arguably even more distasteful.” In the end, “As a moral rationale, ‘the end of us as a national movement’ fails, and fails pitifully, regardless of one’s views on homosexuality.”

So true, and so sad. As a former Boy Scout, I lament the inevitable loss of scouting, knowing full well how much good the scouting movement has done in the lives of countless boys and men. Secretary Gates has signaled his determination to preserve the Boy Scouts of America “as a national movement.” Again, he told the scouting leaders, “we must deal with the world as it is, not as we might want it to be.”

Of course, he never even said how he wanted it to be. That would have required a moral argument. The most unforgivable truth about Gates’s proposal for the Boy Scouts is that it was presented with no moral argument at all. Nevertheless, the eventual requiem for the Boy Scouts will reveal a moral lesson to be sure. But it will be a lesson learned too late, and at so great a loss.