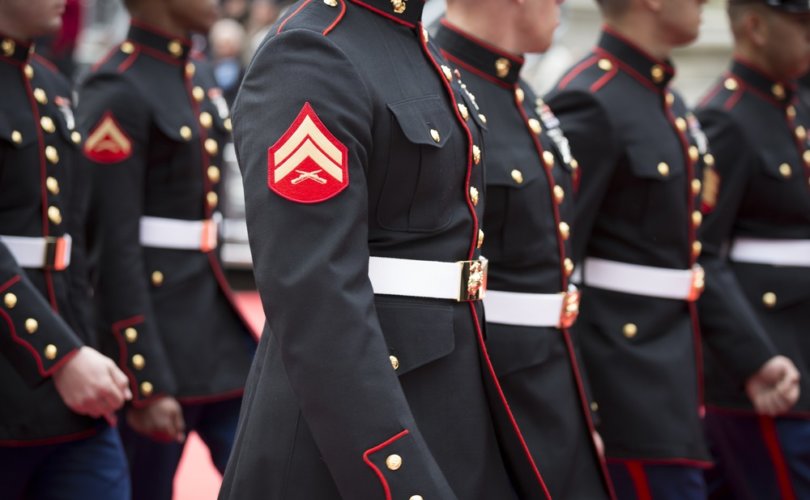 March 12, 2020 (American Thinker) — Before our time in the Marine Corps, some of the equipment issued to Marines, specifically helmet covers, shelter halfs (1/2 of what some call a pup tent), and ponchos, had green camouflage on one side and brown on the other. Rolling the shelter half to fit onto the haversack pack, folding the poncho, and fitting the helmet cover took some time. For the sake of uniformity, every Marine would have his equipment arranged in the same manner, with the two-colored camouflage items folded so only one color showed. This was especially important when it came to Marines in formation. However, on occasion, one unit might have had the “Brown Side Out,” while another unit had the “Green Side Out.” This resulted in one unit having to unpack, unroll, unfold, reroll and refold their gear. An affectionate saying for this was “Green Side Out, Brown Side Out, Run in Circles, Scream and Shout. While Marines don’t have two-sided different color camouflage any longer, and the “Green Side Out, Brown Side Out” reference is lost on modern Marines, similar situations can and do occur. We describe these as “clusterf—-,” which means about the same thing as “SNAFU.”

Same type of scenario can be used to describe the hype being spread by the mainstream media, the Democrats, etc. about the coronavirus/COVID-19: it’s a “clusterf—.”

The president spoke to the nation as of late last week…the major themes were “it’s not too bad (yet), actions taken early (restricting travel from infected parts of China early worked), continue to go about your daily lives, sneeze into a tissue you then throw away, or into your sleeve at the elbow if you don’t have a tissue, and wash your hands. There is more to this story about the outbreak and spread of coronavirus/COVID-19 that will unfold over time. But most experts say don’t get alarmist and ring the pandemic bell, just yet.

Remember Ebola, SARS, H1N1, H3N2, MERS, Zika, etc.? The coronavirus is just the latest disease outbreak to pose a global, potentially pandemic threat. It is not and will not be the last.

We’re currently about three months into the emergence of the coronavirus in Wuhan, Hubei Provence in Central China. Hubei Provence has a population of about sixty million, with some eleven million living in the city of Wuhan. As of today, there have been some 84,000 people infected worldwide, the majority (79,000) of whom are in China. Taking China as an example, Hubei in particular, some 7K have been infected out of a population of 60M. That’s a whopping 0.76%. Statistically, depending on the strain, between 5% and 20% of Americans contract influenza in a given year.

The CDC estimates that influenza has resulted in between 9 million and 45 million illnesses, between 140,000 and 810,000 hospitalizations, and between 12,000 and 81,000 deaths annually since 2010. An estimated 80,000 Americans died of flu and its complications the winter of 2018 — the disease’s highest death toll in at least four decades. The mortality rate for SARS was 11%.

Right now, you are more likely to die of influenza, the common flu, than the coronavirus. Thus far, the coronavirus is presenting itself as a generally “mild” virus; its fatality rate of about 2.3% is considered “low,” and those most at risk of dying from it are likely already compromised with pre-existing health conditions or immunity issues, at risk to severe respiratory infection, elderly, or otherwise unwell.

In general, relatively few cases are seen among children, though they can potentially be hosts and spread the virus.

Politically, it doesn’t matter what Trump’s response to the coronavirus is. Democrats, their elite pals, NeverTrumps, and the mainstream media want an economy-crushing issue to wield against him. They’ve been searching far and wide for something to drag the economy down (the only possible way to beat Trump based on the “cast of clowns” vying for the Democratic nomination) and since “Russia,” “Ukraine,” and “impeachment” didn’t work, now they’re selling a special brand of malarkey describing President Trump’s COVID-19 response as too little, too late, doomed to fail, etc. Lo and behold, the mainstream media are selling it as hard as the Democrats and NeverTrumps. When all else has failed, the Democrats are trying to make this the “coronavirus election.” Hopefully, that scenario will explode in their faces as time and the outbreak progress.

President Trump’s acting White House chief of staff and OMB director, Mick Mulvaney, said recently: “Is it real? It absolutely is real — there’s no question about it. But you saw the president the other day… This is not Ebola. It’s not SARS[.]” Fatality is “someplace between 1 and 2 percent fatal[.] … Is that serious? It absolutely is — there’s no question about it, OK? But it’s not a death sentence.”

Mulvaney scolded the press and the left for how they have portrayed the situation. “We took extraordinary steps four or five weeks ago. Why didn’t you hear about it? What was still going on four or five weeks ago? Impeachment, and that’s all the press wanted to talk about[.] … The reason you’re seeing so much attention [paid] to it today is that they think this is going to be what brings down the president. That’s what this is all about.” Mulvaney said he got a note from a reporter recently asking, “What are you going to do today to calm the markets?” Mulvaney replied, “[R]eally what I’d like to do today to calm the markets is tell people turn the television off.”

What can Americans do to assist in the effort to slow or stop the spread of coronavirus?

That’s good enough advice for us. Turn off mainstream media television, take a deep breath, listen to what government experts like the president’s Coronavirus Task Force and the CDC have to say. There isn’t any reason to start panic-purchasing anything. Stay calm and wash your hands (a lot).

Lt. Col. J.C. “Séamas” Brader had 20-plus years of active duty in the USMC, most of the time serving as an intelligence officer before retiring in 2003. He has deployed many times, including in Iraq. He currently works as a consultant / technical writer / analyst / project manager for Infinity Support Services, Headquartered in Virginia.