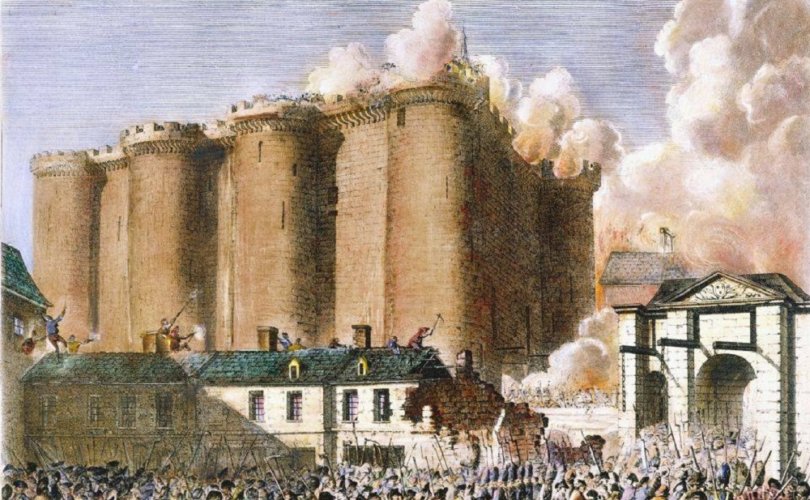 June 4, 2018 (The Wanderer) – Father Jim Schall, S.J., doesn't excite easily. His writing and teaching abound in thoughtful insights that make being brilliant look easy. So, when he recently published his musings “On America's impending revolution,” it brought on what Joe Sobran once called “the qualm before the storm.” Father Schall wasn't kidding.

In the endless outrage, violence, filth, and murderous epithets that typify the Left's opposition to Donald Trump, Father Schall sees the destruction of what Aristotle describes as our civic virtues – friendship, comity and goodwill – without which a community cannot live in peace. Since Karl Marx, the Left's ideology has emphasized class struggle as the path to ultimate victory, to be achieved by violence whenever necessary. Trump's presidency does not constitute a mere pause in the revolution, but the threat of an actual defeat. He must therefore be stopped – even killed. In the Left, Father Schall observes “a bitterness and, among many, a persistent effort to end, as soon as possible, the new presidency even by calling for his assassination.”

In this progression of escalating outrage, the president defies the Left and seems to be accomplishing more, not less, with each passing day. Father Schall channels Victor Hanson, a classicist scholar of revolutions, to calmly conclude that “it cannot go on like this. The danger will arise from a left desperate to stop any gradual success of the current presidency…. The more he succeeds, the more likely the revolution.”

Father Schall is one of the most able political theorists of our times. When he's worried, we should all be worried. And, as if you needed it, let me add that the optimists who insist “the pendulum always swings back” must confront the reality that, eventually, it doesn't.

And this time it won't, because it can't.

Many elite institutions that have been the engine of the American Left have not only run out of gas, they have self-destructed. What were once the major media have been reduced to a vulgar pack of barbarians, each trying to outdo the other in a mutual primal scream. Witness the recent White House Correspondents Dinner, so laced with hatred and scatological tirades that the event might never be held again. What was once journalism has become a back-alley brawl of perpetual delinquents and hacks seething with resentment. The longtime dean of a major journalism school tells me he has only contempt for everyone who voted for Trump – and a generation of reporters undoubtedly digested his view as the party line required to succeed.

“Professional reporting” is dead, and Hollywood is no better. For half a century, it has pushed the envelope not only to embrace the sexual revolution but to put it in a pedestal, worshipping violence and sexual deviance and self-indulgence. As its image collapses, stars turn on each other in rage. Women scream at men who apparently took feminists at their word, only to find that not all of them were secretly longing to be violently assaulted. Bill Cosby, “America's Dad,” is now going to prison for rape, while Harvey Weinstein's boorish obscenities have brought down his movie empire, and much of Tinseltown with it.

One needs only mention higher education and the bipartisan government establishment to recognize the specter of rot and corruption. Senator John McCain, in a book blurb translated into plain English, publicly announces that, now that he's dying, he can finally tell the truth.

One after another, America's time-honored institutions have hollowed out. The radical Left can no longer appeal to those secular symbols of stability to justify its rule. Nor can the left turn to damage control as an option: its traditional avenues to power and influence are beyond repair. Their credibility has been shredded in public view. The ruins offer them no solace.

They can no longer rule by feigned persuasion. All that is left is force, and time is running out. The “collusion with Russia” story is dead, and the Deep State operators desperately trying to lynch the president are themselves being referred for criminal trial.

Last summer the audacious Left-wing Bernie Sanders volunteer James Hodgkinson came close to massacring dozens of Republican senators and representatives practicing baseball. The fortunate presence of one police detail stopped him. The “professional” media scarcely took public notice. They are much more interested in a stripper supposedly connected to Trump years ago. An Internet search reveals that the New York Times has mentioned her ten times as often as it has the wannabe Democrat mass murderer Hodgkinson.

When will this “impending revolution” break out into the open? Well, Vladimir Lenin's newspaper was called Iskra, “The Spark.” Today's Left foments revolution, but the event that will spark it cannot be predicted. Who knew on July 14, 1789, that the release from the Bastille of the Marquis de Sade, a lewd, insane sex pervert, would lead to the French Revolution, the terror, and the Vendee? Who knew on July 26, 1953, that Fidel Castro's failed raid on the Moncada Barracks in Santiago de Cuba would lead to his takeover six years later? Earlier this week, radical leftists all over the world sent hundreds of thousands of violent demonstrators into the streets to destroy property, set fires, and attack police to celebrate May Day.

It can happen here.

While we can't foresee the spark, we can try to prevent it. This past week, at the Republican team's first baseball practice, a veritable army of law enforcement at every level surrounded the field. They know that violence is brewing. They can't be everywhere. Nonetheless, they know.

And someone else knew too. Before his retirement in 2014, Chicago's Francis Cardinal George, O.M.I., said, “”I expect to die in bed, my successor will die in prison and his successor will die a martyr in the public square.” Many wondered, how can this be?

We can't predict the spark, but we can examine the motive. Consider: our old Catholic friend and scholar Erik von Kuehneldt-Leddihn writes that “the atrocities of the French Republicans were committed under the slogan of Liberty, Fraternity and Equality.” Rousseau provided the slogans, but de Sade provided the motive. The Paris mob was quickly caught up in the murderous violence, not because of abstractions but spurred by blood lust soaked with sexual savagery so vile that it escapes mention in most textbooks, even though it lay at the core of the genocide of hundreds of thousands throughout France, especially the Vendee and Bretagne.

Why must they be annihilated? Because they were Catholic. They represented the wholesale rejection and condemnation of the revolution. Which brings us back to Cardinal George and the driving force of the cultural decay of the last fifty years: the sexual revolution and the pill. Today, abdicating to the Culture of Death, the federal courts recognize only one “right” that has no limits at all: Sex.

Notice that Cardinal George predicts that his successor's successor will be martyred not in the dank basement of a prison but in a “public square,” teeming with a mob cheering the execution of someone so vile as to call their unbounded sexual lusts “sinful.”

Off with his head!

In The Exorcist, an enraged Satan spews vulgarities at the priest, screaming that his mother offers sexual favors in Hell. Incredibly, the “comic” at the Correspondents Dinner used stunningly similar language in attacking Trump supporters.

We know what we're up against. Today ninety percent of the population under forty has been told not to think, but to “feel good about themselves.” And most often that means simply to “feel good,” period. That is all the formal “education” they have. From the snowflakes on campus to the high-and-mighty media screaming profanities and celebrating hate, feelings rule.

As Hannah Arendt put it long ago, “The aim of totalitarian education has never been to instill convictions but to destroy the capacity to form any.”

The mobs cheering the execution of Chicago's future Archbishop will be motivated by the same base lusts that have motivated every Leftist revolution: lust of the flesh, lust of the eyes, and the pride of life, superbia vitae (1 John 2:16). Of course, the mob will eventually begin killing its own. When there are no limits, there are no “safe zones” for the snowflakes. As Dostoevsky puts it, “If there is no God, then everything is permitted.”