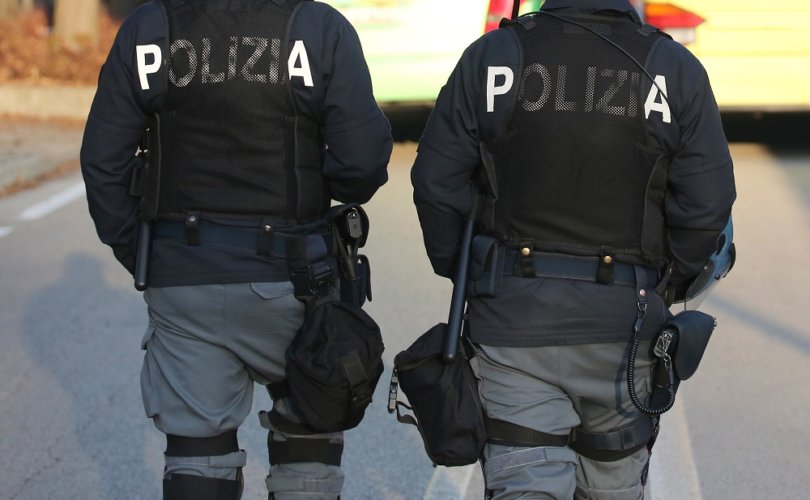 A scene from Communist China took place in Marina di Cerveteri north of Rome. A parish priest surprised by two law enforcement officials is ordered to stop a Eucharistic celebration. What’s the reason? Because there were faithful gathered outside in the churchyard praying at the recommended distance.

March 18, 2020 (La Nuova Bussola Quotidiana) — Police raid a church and break up a Mass at the altar. It’s not a news story from Communist China, we are in Italy. This is what happened in Cerveteri, a large town immersed in what was once the ancient Roman countryside, best known for one of the most important Etruscan burial grounds. The municipal police blitz took place towards the end of the celebration at St. Francis of Assisi in Marina di Cerveteri.

The most solemn moment of the service — the Eucharist — has just finished. The priest does even have the chance to begin the concluding rite inside an empty church (but with faithful watching live on streaming) when two local police officers in antiviral masks swoop in behind the altar. They then authoritatively tell the priest that the celebration has to cease immediately. What was their reason for stopping the Mass?  They say the parish priest had left the doors of his church open and outside in the churchyard, faithful had gathered in prayer. However, the few faithful present in the churchyard had kept a safe distance, far greater than the commonly known one-meter recommendation decreed by the Italian government.

The parish priest was caught by surprise during the moment of silence after Communion. He tried explaining to the law enforcement officers that he had taken all the recommended precautions, including blocking the church’s entrance with a lectern placed in the centre of the nave. But he is unable to stop them. One of the two policemen then grabs his microphone and announces, “Excuse me ladies and gentlemen. It is not permissible to conduct religious services and gather together. Please leave, this isn’t allowed.”

The priest, however, maintained his composure and without batting an eye proceeded to the concluding rite. The raid was filmed by one of the few faithful present who — like everyone else — had gathered outside the church.  It is probably the clearest indication of how Pope Francis is right in saying that “drastic measures are not always good.”

In this case, in fact, the parish priest of Latium (the region where Rome is the capital) implemented what the pope hoped for in a homily he delivered in the chapel of his Santa Marta residence on the seventh anniversary of his pontificate: “We pray that the Holy Spirit will give our pastors the ability and the pastoral discernment to find ways that do not leave God’s holy faithful people alone.”  The parish pews in Marina di Cerveteri were completely empty and the entrance blocked, so yesterday’s liturgy was in effect not a public Mass and in compliance with provisions issued by the local bishop Gino Reali and the Italian Bishops’ Conference which had to adopt the Italian government’s severely restrictive measures.

These same measures also permit churches to remain open, so it is not clear why the parish priest — who also took care to discourage  parishioners from entering the building — should have closed the doors right at the time of the Sunday Mass which he privately celebrated. Moreover, can we really imagine a priest interrupting the liturgy to hunt down a few faithful who had arrived in the churchyard and who were visibly maintaining social distancing? Thanks to keeping the church doors open, Fr. Mimmo managed to find a way that would not leave God’s holy faithful alone, as Pope Francis most rightly requested last Friday.

However, the two local police officers saw the matter differently. Neither did they take into account the sacredness of moment and place where they intervened, much less the penal code which punishes offenders who disturb religious functions. If this really had been such a gross violation of Coronavirus emergency decrees, they could have simply asked the faithful gathered in the churchyard to go back home. Was it really necessary to break into the Lord’s house FBI-style in the middle of Mass and order it stopped in the most sacred space behind the altar at the foot of the tabernacle?

The police did not even spare the poor priest’s public humiliation. Instead, while scolding him in front of a live streaming audience, they ripped the microphone out of his hands to make a service announcement. The announcement could have easily been made outside the church and to the very few persons present. We should laud Fr. Mimmo who, in full compliance with safety regulations, left his church doors open and who, despite the disturbance of some tactless police, finished the Mass undaunted.

The sad scene in Marina di Cerveteri reminds us, indeed, of the terrible stories reported from places where Catholics must worship in secret. At the same time, this is also a sign of hope, reminding us of those brave priests who, during the Second World War, continued to celebrate Mass until the very end even as bombs fell from the sky right over their heads.