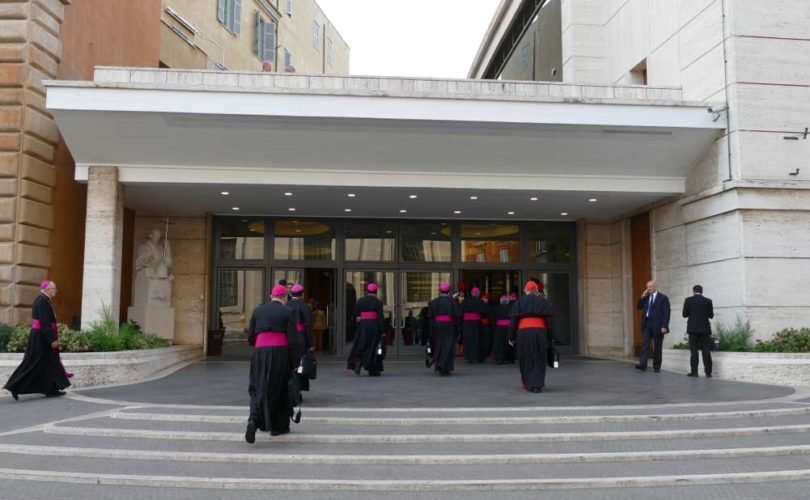 Bishops and Cardinals entering the Synod this past WednesdayLifeSite/Patrick Craine

October 9, 2015 (CatholicCulture.org) –In an unscheduled address to the Synod of Bishops yesterday, we’re told, Pope Francis told the participants that they should not indulge in conspiracy theories about secret plots to manipulate the result of the Synod. The Holy Father is absolutely right. What’s happening at this Synod is no secret at all.

Pope Francis was evidently reacting to complaints voiced during the first day of Synod discussions, by prelates who said that the working document was flawed and the new “ground rules” for the discussion made serious debate difficult. Those complaints have been aired in Rome frequently this week, reflecting an undercurrent of dissatisfaction that arose last year, at the extraordinary meeting of the Synod that set the stage for this month’s showdown.

The Synod, as a deliberative body, should give all the world’s bishops an equal opportunity to express their views. But the critics charge that at this Synod, as in Orwell’s Animal Farm, some bishops—and their opinions—are more equal than others. The redoubtable Australian Cardinal George Pell allegedly rose to question whether the committee selected to prepare the Synod’s final message was a truly representative group. (Of the ten prelates on that committee, seven are attending the Synod because they were appointed by the Pope, rather than elected by their episcopal conferences.) Some Vatican-watchers saw the Pope’s unusual intervention on Tuesday as a direct response to Cardinal Pell’s concern.

Yet ultimately it is not terribly important to balance the membership of that committee, because the only document that will emerge from this Synod will be released by Pope Francis himself. Under new rules adopted for this Synod, the body of bishops will not vote on a set of propositions, nor will they release their own concluding statement. The final product of this Synod will be no more, and no less, than Pope Francis wants it to be.

Nor is this inappropriate. Bear in mind that the Synod of Bishops deliberates, but does not legislate. Unlike an ecumenical council, the Synod has no teaching authority of its own. As conservative Catholics were wont to emphasize in the past, the Synod is an advisory board; the Pope makes all the final decisions.

However, Pope Francis, with his characteristic enthusiasm for stirring up discussion, has repeatedly indicated that he wants to increase the role of the Synod, and to ensure a free and open discussion among the bishops. Last year, when the extraordinary session opened, the Pontiff told the Synod members that they should never hesitate to state their views clearly; he insisted on an untrammeled debate.

So it is odd that at this year’s meeting, all interventions are limited to three minutes: a time limit that restricts serious debate on fundamental questions. Moreover, in a break from previous practice, the Vatican press office is not providing a daily summary that lists the prelates who have spoken and summarizes their thoughts. Instead that daily briefings include a few of the salient points raised at the day’s meeting, without identifying the bishops who made those points.

This new system, it’s true, allows bishops to speak freely without worrying about the negative publicity that might flow from a candid statement. On the other hand, the system also lends itself to selective reporting—or, at the very least, charges of selective reporting. Have you noticed how frequently this little essay, and other reports about the Synod, refer to something that a bishop (or the Pope) “reportedly” said? We don’t have the actual texts; we’re relying on someone’s interpretation.

As John Allen has observed, speaking for his fellow Vatican journalists, “The dirty little secret is that we’re not really covering the Synod at all. For the most part, we’re covering people telling us about the Synod, which is an entirely different enterprise.”

Every day, the Vatican press office makes a few prelates available to reporters for a briefing. Do those prelates fairly represent the entire body of bishops? Do their reports provide an accurate, balanced summary of what has been discussed? We don’t know. Is it a coincidence that an address by Cardinal Robert Sarah, condemning “gender ideology,” was not included in the daily briefings, while a seemingly off-topic talk by Archbishop Paul-Andre Durocher, suggesting that women might be ordained as deacons, was given ample coverage? Again, we don’t know. In fact we don’t even know if Pope Francis really did warn against conspiracy theories; that report, too, came to us second-hand.

At last year’s extraordinary session, with some of the same procedural rules in place, many prelates were shocked and appalled when a “preliminary report” emerged, giving a highly tendentious account of the early discussions. The public release of that preliminary report, without prior approval by the bishops, provoked loud complaints that the staff, led by Cardinal Baldisseri, had rigged the process. Reporter Edward Pentin’s revealing book, The Rigging of a Vatican Synod, produces abundant evidence to support that indictment.

This year, there is no reason to be surprised when Cardinal Baldisseri and his staff flex their organizational muscles. Prelates who went through the process last year know what to expect.

“Suspicion about rigging of synod has been allayed, says Cardinal Napier,” read a Catholic News Service headline. But that’s not quite what Cardinal Napier said. The South African cardinal, who had been highly critical of the staff maneuvers at last October’s meeting, told CNS: “I think this time we are aware of and I think the secretary of the synod [Cardinal Lorenzo Baldisseri] is aware that there are these suspicions and, therefore, I think there’s going to be a much more perhaps open-handed approach to the synod.”

The suspicions remain, and will continue to play a role in the discussions of the next two weeks. But there is, and will be, no secret conspiracy. The procedural rules have been announced, and the bishops are free to object—as indeed quite a few have objected. The Synod staff will continue to filter information about the bishops’ discussions. And in the end, the final statement from the Synod will be made by Pope Francis.

The Pope ultimately controls the process. The Pope will ultimately control the product. There may be heated debates during this October session; the Pope has insisted he would welcome them. But it should be no mystery that the Pope is in control.

Cardinal Schonborn says Synod’s contentious parts are yet to come

Homosexuality and the Synod on the Family

Has the intervention of Pope Francis returned the Synod to heterodox trajectory?