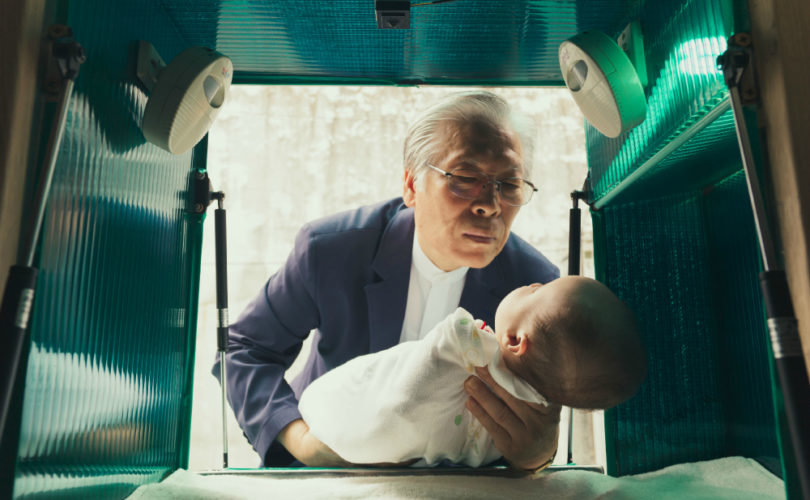 February 10, 2015 (BreakPoint.org) — In Seoul, the capital of South Korea, hundreds of infants are abandoned on the streets every year. The problem became so severe that one Korean pastor decided to take unprecedented action.

It’s a story that’s now the subject of an award-winning documentary by film maker Brian Ivie, which will be shown in theaters nationwide March 3-5. Please mark it on your calendar, March 3-5, because you and your church are going to want to see it.

Stirred several years ago by a report in the Los Angeles Times about Pastor Lee Jong-rak’s unique solution to infant abandonment, Ivie—then a film student at the University of Southern California—raised enough money to lead a team to Seoul to capture this tiny but inspirational ministry.

Well, Pastor Lee Jong-rak calls it his “Drop Box.” The concept is simple. Instead of aborting or abandoning their infants, mothers who either can’t keep or don’t want their babies bring them to the wooden box affixed to Pastor Lee’s house; they say goodbye, and they shut the door. The box, which is equipped with lights and heat, has a sign in Korean, “Please don’t throw away unwanted or disabled babies, or babies of single mothers. Please bring them here instead.”

When the box opens a bell rings, and Pastor Lee, his wife, or a volunteer, comes and takes the child inside. Since Pastor Lee installed the Drop Box in 2009, as many as 18 babies a month have arrived at his home, which doubles as an orphanage. He and his wife have even adopted ten as their own—that’s the maximum number local authorities will allow.

Sometimes he speaks to mothers face-to-face. One told him she intended to poison herself and her newborn before hearing about the Drop Box. Another simply left a note, which read:

“My baby! Mom is so sorry. I am so sorry to make this decision…I hope you meet great parents… Mom loves you more than anything else. I leave you here because I don’t know who your father is. I used to think about something bad, but I guess this box is safer for you…Please forgive me.”

Brian Ivie’s movie, aptly entitled “The Drop Box,” has already won awards at the Jubilee and Independent Christian Film festivals. And now, Focus on the Family, Pine Creek Entertainment, Kindred Image and Fathom Events will present the movie in selected cinemas for three nights only, March 3-5.

“The Drop Box” is the second installment of Focus’ Reclamation Series, documentaries that focus on the importance of marriage, family and a Christ-centered response to the social ills presented in each film. The film “Irreplaceable,” which Eric Metaxas and I were both a part of, was the first film in that series.

“The Drop Box” is the kind of story that changes lives. Forever. Just ask Brian Ivie. When accepting one of the awards for the film, he said, “I became a Christian while making this movie. When I started to make it and I saw all these kids come through the drop box—it was like a flash from heaven, just like these kids with disabilities had crooked bodies, I have a crooked soul. And God loves me still.”

Friends, the fight for life is more than just political. In so many ways, it’s decided in the cultural imagination. And that’s why it’s critical that Christians support films like this: high-quality films that don’t preach, but show how precious life truly is, and how otherwise ordinary individuals will go to extraordinary lengths to save and protect the most vulnerable among us.

So here’s what I would like you to do. Go to “The Drop Box” movie website. First, watch the trailer. You’re gonna say, “I’ve got to see this movie.” Second, check out the resources that you and your church can use to promote this moving, beautiful pro-life film in your community. And third, use the theater locator to find the film closest to you. I hope you’ll attend—and that you’ll take church members, friends and family with you.