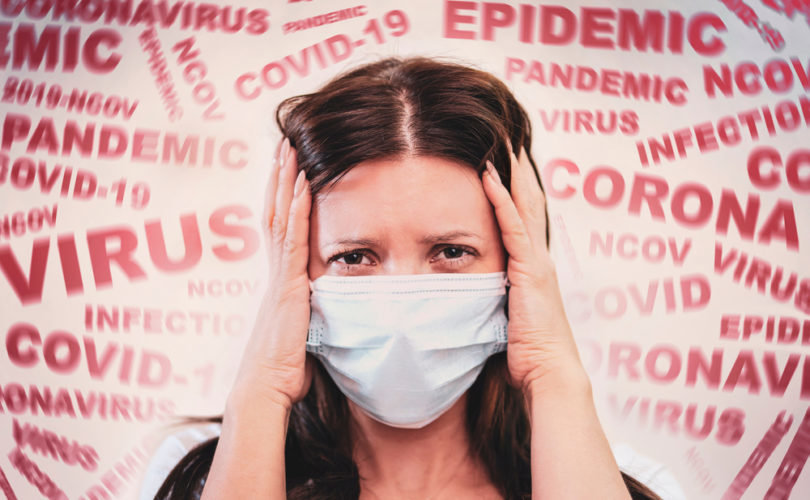 TORONTO, Ontario (LifeSiteNews) – Death has been at the forefront of our collective minds over the past 18 months. When the WHO declared the advent of COVID-19 a world-wide pandemic, whole swaths of civilization descended into a pit of panic about the unknown virus that had sprung forth from Wuhan.

Uncertainty abounded. Was this God’s wrath? Was this a chemical weapon unleashed by a Communist state? Was this nothing but a seasonal respiratory illness that was co-opted for political reasons? In reality, we will probably never know the full truth about what happened in March 2020, as there are too many moving parts to consider at once.

In addition, we will probably not truly know what is true or false about the severity of the virus for some time. When we consider the fact that a significant percentage of diagnosed COVID illnesses are false positives; or if we consider the fact that the term “case” has been misused to stoke fear in the populace – we are faced with the reality that much of what we have been told about the severity and deadliness of COVID is, in fact, misinformation. As a side note, has anyone been able to locate the flu? It seems to have taken an extended vacation.

Now, whether or not the virus is more or less severe is not really the issue we ought to consider at this time. I say this because after 18 months of living through lockdowns, and now vaccine passport legislation, it is clear that nothing we can do will ever eradicate a respiratory illness – mystery about the case of the vanishing influenza virus notwithstanding.

What we ought to consider is the metaphysical shift that has taken place since the hysteria began. I am speaking about the loss of critical thinking that has infected more minds than COVID has bodies.

— Article continues below Petition —
SIGN: Show Pope Francis the Latin Mass will survive any suppression
Show Petition Text
36011 have signed the petition.
Let's get to 40000!
Thank you for signing this petition!
Add your signature:
Show Petition Text

Coronaviruses have been around for a long time; they are simply one type of virus that leads to flu-like illness in human beings. I would imagine that before the pandemic was declared, most readers never considered rigorously what sort of virus they contracted during the cold and flu season. Instead, we would think about our symptoms – if we were feeling ‘under the weather’ – and use common sense to make ourselves better.

This all changed at the advent of COVID, however, as centuries of wisdom were thrown out the window on a whim. There were no longer “healthy” and “sick” people; instead, we were divided into “asymptomatic” and “symptomatic.” There is no evidence to be found that healthy people will drive a pandemic, and there is also no evidence that viruses are like magical cooties – something that will invariably infect people if they simply come in contact with it. No, we have decades – nay, centuries – of experience that tells us human beings have immune systems that battle viruses, and healthy people don’t spread sicknesses.

In the mind of the world enwrapped in COVID-hysteria, none of this matters. All people see are “cases” rising on newscasts, as they entertain nightmares about ventilators and people who believe in Ivermectin.

It does not matter that we have been told repeatedly that the vast majority of people who contract COVID will be fine, and in fact many would not even know they had it. You would think that this would give people comfort in the face of uncertainty, but it hasn’t. For whatever reason, the idea of the virus has infected our collective minds at a rate even more detrimental than the actual illness.

People have largely eschewed all reason as they have seemingly succumbed to the weight of the flood of negative emotion leveled at them by the propaganda – sorry – the media.

I remember speaking to a family member last summer about a curious statement from Toronto Public Health that read: “Individuals who have died with COVID-19, but not as a result of COVID-19, are included in the case counts for COVID-19 deaths in Toronto.”

Let that sink in: people who did not die from an illness are counted as deaths from that illness. This means that you could be hit by a train, but if you tested positive – by a dubious PCR test I might add – around the time of your death, you would be added to the COVID death count.

Is it any wonder that the numbers are so high?

I pointed out this hoaxical admission from Toronto Public Health to my family member, and as if speaking from a pre-programmed automatic response mechanism, the person said to me, “Yes, COVID makes you die of other things faster.”

My proverbial breath was taken away. Imagine if you told someone that a friend who had late-stage cancer had died after a bout with pneumonia; would you think it wise to count that person as a “flu death” even though their organs had been failing for weeks? In addition, would it be correct to say that the flu made them “die faster” from cancer? Of course not! Granted, it is a sad thing when someone is already sickly, and they contract an illness – but nothing about the newly contracted illness hastens the cancerous mechanism that has already degraded the body.

This should be obvious to people, but it is not.

Even – or perhaps especially – scientific publications have become hypnotized by the un-reason that has been the gravest of plagues these last 18 months. Speaking of the flu, Scientific American admitted that the flu had disappeared because “mask wearing, social distancing, and other steps to stop COVID-19 have also curtailed influenza.”

So, according to an esteemed scientific publication which is read by millions of people, we are to believe that masks and other measures have stopped the advent of one respiratory virus, but not another. The level of intellectual contradiction required to believe such a farce boggles the mind. If a virus is small enough to travel by way of your breath, then it can of course escape the cloth mask – the mask that is not sanitary by medical standards – that you are breathing through. Masks have been overwhelmingly proven to not stop infections of respiratory viruses, yet people will simultaneously believe they are saved from the flu because of their dampened cotton defense system, but that the Delta variant is raging in a world of masked and vaccinated disease carriers.

In addition, we have now progressed from mere mask-mania to vaccine-insanity. Recently, Justin Trudeau was caught screaming like an overwhelmed camp-councilor at a group of Liberal Party supporters – a group standing in painted circles, all 6 feet apart – about the dangers of unvaccinated people sitting beside vaccinated people. “Don’t think you can get on a plane, or a train besides vaccinated people and put them at risk!” he bellowed in his best big-boy voice.

Is Mr. Trudeau so daft that he has outed himself as an “anti-vaxxer?” Does he not understand that a person who is vaccinated is supposed to be protected from an illness? He may as well have said, “Don’t think you can ride your bike without a helmet beside someone else who is riding their bike, but with a helmet, and put that person at risk!”

Again, we see that the worst of the viruses circulating the globe is the virus of the mind that has caused grown men to lose their reason.

What a time to be alive, wherein we are witnessing the utter deterioration of the collective intellect of whole groups of people.

As alarming as it may be, it is comforting to remember that this level of mental deficiency is self-defeating. It is a matter of time before the lack of reason that has infected the minds of the masses will defeat itself – like mask-wearing has defeated the flu.