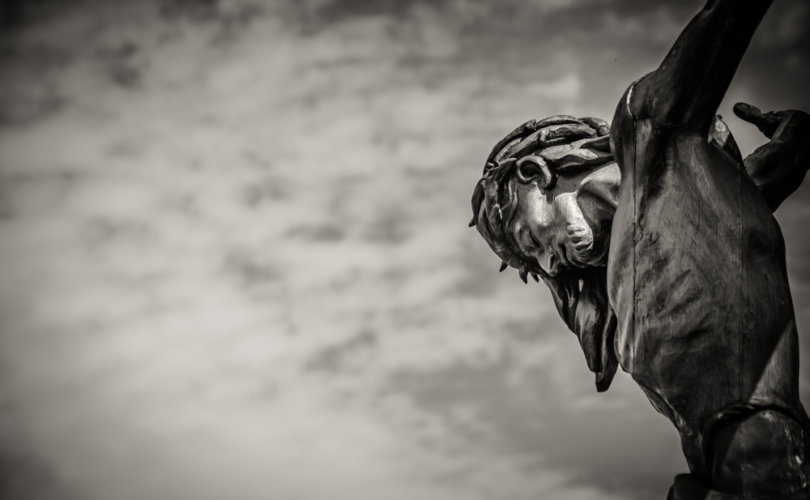 June 29, 2016 (Archdiocese of Washington) — Though he lived in the Southern Kingdom of Judah, the prophet Amos was sent north by God to preach to the Northern Kingdom of Israel. Perhaps no other prophet was as searing in his condemnation and as demanding in his call as was Amos. His prophecies of doom largely came true in the form of a huge earthquake that struck the region in 760 B.C. (two years after his death) and forty years later in the utter conquest and destruction of Israel in 721 B.C. The message is clear: unrepented sin brings dire consequences. When a nation refuses to repent it seals its own doom.

This theme was clearly announced by Amos in the reading from daily Mass (Tuesday of the 13th Week), excerpted here:

Hear this word, O children of Israel, that the LORD pronounces over you,
over the whole family that I brought up from the land of Egypt:

You alone have I favored,
more than all the families of the earth;
Therefore I will punish you
for all your crimes. …

If the trumpet sounds in a city,
will the people not be frightened?
If evil befalls a city,
has not the LORD caused it?
Indeed, the Lord GOD does nothing
without revealing his plan
to his servants, the prophets.

I brought upon you such upheaval
as when God overthrew Sodom and Gomorrah:
you were like a brand plucked from the fire;
Yet you returned not to me,
says the LORD. …

So now I will deal with you in my own way, O Israel!
and since I will deal thus with you,
prepare to meet your God, O Israel. …

Within a generation, Assyria did in fact invade and destroy the ten Northern tribes that made up Israel, leaving only Judah in the South, along with some Levites and Benjaminites. The “Ten Lost Tribes” were effectively gone and not heard from again.

What of a nation and culture such as ours? As political entities, the United States and the countries of Europe are not covenanted with the Lord. But surely Western culture (once called Christendom) has a special relationship with God through faith in Christ and in the moral vision that once united us, albeit imperfectly. What of us? Do readings like this speak to us?

There has come upon the West a hardening and unrepentant spirit. Even having been warned to pray (e.g., through the proclamation of the Gospel and through special apparitions such as at Lourdes and Fatima), we collectively refuse to repent, instead doubling down on sin. Rates of unbelief have skyrocketed and there has been a massive falling away from the practice of the faith. The “right” to the grave injustice of abortion continues to sail through the courts. Families are in ruins; sexual promiscuity, confusion, and the celebration of every sort of disorder grow daily.

As early as the 1940s, C.S. Lewis lamented the loss of the faith in Europe and observed that it was worse than a return to paganism: At least pagans and barbarians had belief in deities and some respect for Natural Law. Whereas pagan Europe was like a virgin awaiting her groom, modern Europe of the 1940s was an angry divorcee, a bad scene. And things have only further declined in what we call the West.

Amos reminds us that our sins and injustices cannot go on forever. God hears the cries of the poor, the aborted, the victims of the sexual revolution, the children who suffer from their parents’ misbehavior, those who suffer on account of our greed, and many others.

I am not able to see the future in detail, but it is biblically and historically true that indulged evil and sin cannot last. They carry the seeds of destruction because they are rooted in selfishness. And selfishness does not build families, nations, or cultures. While evil has its day, it also has its end, which is destruction.

There seem to be two models (in antiquity and in Scripture) through which this collapse that Amos and others describe occurs.

I. The Disease Model – As unrepented sin accumulates in a person and in a culture, its effects grow in stages like a cancer; eventually the condition becomes irreversible. The punishment for sin is more sin. The darkness grows ever deeper. The light seems obnoxious and is rejected. Hope for a cure fades as the very medicine necessary (faith) is rejected and scoffed at. Disorders of every kind multiply. Systems like the family start to fail, falling under the burden of growing sin and selfishness. Low birth rates and abortion reflect this selfishness and destroy one of most basic instincts: survival. Under the load of sin, fewer and fewer people in such a culture can rouse themselves to make the necessary changes.

People and cultures like this just fade away, replaced by others who still have basic virtues and values that make for a culture. Even if the replacing people have those virtues in a fierce and unrefined way, they do at least have them.

In many ways, this is what happened to the Greco-Roman world. Rome was not so much conquered as it faded away. (Yes, there were skirmishes with the barbarians, but no big, final showdown.) The Romans became soft; they lost family virtues and a solid work ethic. They declined into sexual immorality and infanticide. They depended on imported slave labor to do their work and took to an increasingly decadent leisure. Little by little Rome faded as Europe was overtaken by barbarians, who though fierce, still had the natural virtues needed to form a culture.

This also seems to be happening to Europe today as they are simply being replaced by Muslims and others from the south. And though sadly they are not Christians, they do actually believe in something. Though often fierce, they are at least passionate and willing to make sacrifices for their vision, however flawed. Let us pray that the Church can convert them to Jesus, as happened with the barbarians of old.

This is the disease model, in which God seems to sit back and allow sin to run its course, bringing an end to an unrepentant culture and nation.

II. The Destruction Model – In this model, God brings a swifter and more decisive end to sin and unrepentance; it is largely what Amos describes in the passage above. There is a general weakness that is introduced into a nation or culture. Through unrepentance that weakness grows, making that nation an easy target for its enemies. A nation that is sinful becomes conflicted within because, as already noted, sin is rooted in selfishness. Thus, in a nation of unchecked and unrepented sin, there is diminishing unity. As enemies begin to attack, there is no agreed upon strategy or even resolve to repel the threats.

In Ancient Israel God sent prophets to secure a repentance that would strengthen it. Most of the reforms undertaken, however, were fleeting and tepid. God then sent final warnings of imminent destruction, as we saw in the Amos text above.

Over time, but also with a suddenness, Israel and Judah suffered stunning defeats, first in 721 B.C., and later in 587 B.C.

Jesus also warned the Jewish people of His day of the looming destruction of their country if they did not repent and come to faith in Him. Forty years later Jerusalem was destroyed, the Temple burned (never again to be rebuilt), and 1.2 million Jews lost their lives in the war.

This is the destruction model, which begins a bit like the disease model but ends in a sudden crisis (brought on by sin) rather than a gradual fading away and replacement.

In our times, the disease model seems more evident. In terms of our moral condition, it is “Zero Dark Thirty” in the West. Just when we think things can’t get any stranger, they do; disorders are multiplied. But instead of being addressed as problems, they are celebrated. The decadence of leisure and the selfishness of sin are progressing, and things that make for a solid culture and nation are lacking. A kind of replacement seems to be underway in Europe despite a certain awakening by some in terms of concern for low birthrates, etc.

In the United States, it is less clear what will happen. Politically, our Constitution, rooted in biblical values, once guided us. But it has become the personal plaything of judges and seems doomed to be interpreted out of existence. On the moral front, Americans no longer look collectively to the Judeo-Christian heritage that birthed our nation and sustained in its citizens the virtues necessary to support a republic. A nation cannot withstand such trends. Exactly how it will play out is less clear to me, but that it will play out is without doubt.

Consider carefully the words of Amos as relevant for us all, not just the Church, but also the nation!

Reprinted with permission from Community in Action.