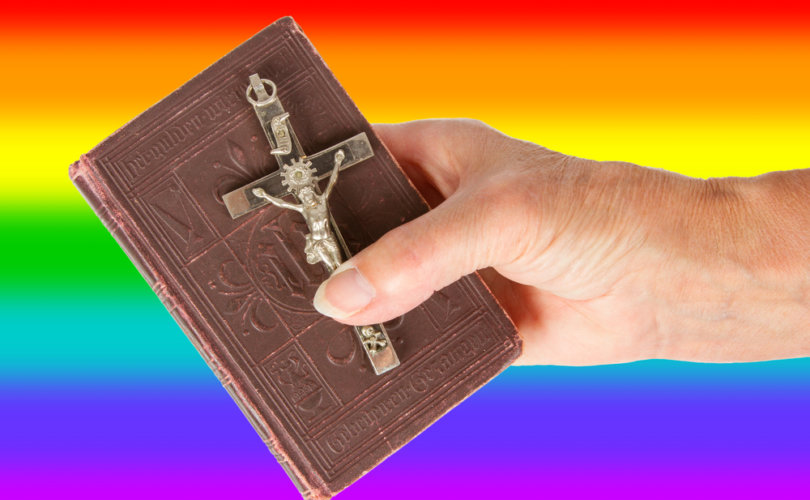 Her name is Karen Oliveto of Glide Memorial United Methodist Church in San Francisco. Even though the denomination, unlike some other mainline churches, has not changed its official teaching on what a marriage is, Oliveto’s legal union to another woman in California was no barrier to her ascension in the church hierarchy. Anyone paying attention knows why.

The UMC’s problem isn’t the election of its first lesbian bishop, but that it never properly disciplined or expelled those in its midst who abandoned the faith once delivered a long, long time ago.

Exhibit A is Oliveto herself. John Lomperis, director of UMAction, a group advocating a return to orthodoxy in the denomination, cites some startling examples from the 2005 “Hearts on Fire” Convocation of the United Methodist Church in western North Carolina.

Oliveto, then identified as a “same-sex union convener,” was among those invited to speak. Now at that time, she had not yet outed herself as a “partnered” lesbian, but was already twisting the Scripture. According to Lomperis, Oliveto “speculated that Jesus laughed at his disciples for continuing to look up as he was lifted out of their sight, trying to ‘keep their eyes locked on a past that is no longer,’ rather than looking down and moving on.” She equated this with those who still held traditional views on sexuality and marriage.

And Oliveto wasn’t finished. In perhaps her most telling admission, she warned against having too high a view of Scripture. “The text, the Bible, is not God,” she said, adding that any true “biblical theology” covers both “the benefits and the flaws” of Scripture. As an example of a “flaw,” Oliveto decried the Bible’s “theology of election and chosenness,” such as the Jews being God’s chosen people, which she blamed for everything from colonialism, to slavery, to the “destruction of native cultures and religions,” to racism, and to the oppression of homosexuals.

And yet the church where she pastored did not protest. No wonder the UMC faces today the theological crisis it has on its hands. To borrow a quote from Emile Cammaerts, “When men choose not to believe in God, they do not thereafter believe in nothing. They then become capable of believing in anything.”

Rejecting God’s Word, many in the UMC have left their denomination open to “anything.” Or as Romans puts it, “They exchanged the truth about God for a lie, and worshiped and served created things rather than the Creator.”

We need to pray for reform groups like UMAction.

Of course, United Methodists are not the only mainline denomination to have compromised on human sexuality. Mainline Presbyterians and Episcopalians, for their parts, have also walked down similar disastrous doctrinal path.

What are the lessons? First, we ought never trade in biblical truth for “relevance,” nor treat the Scriptures as if we are over them, rather than under their authority. Second, we ought always, like our forefathers in the faith, oppose heresy—charitably, but firmly. And finally, if we’re to do the first two things, we must know what the Bible says, and stand on it no matter the cost.