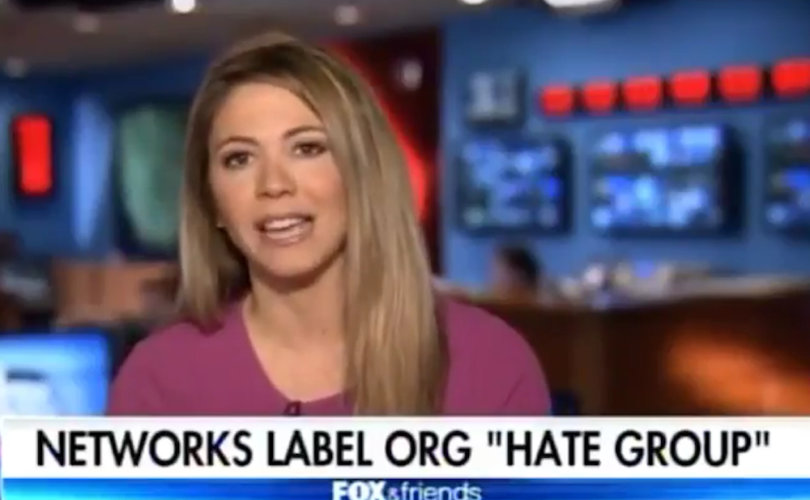 NEW YORK, July 17, 2017 (LifeSiteNews) — ABC News and other mainstream media once again revealed an anti-Christian bigotry and demonstrated why Americans no longer trust them to tell the truth.

ABC's Pete Madden and Erin Galloway went on the attack against the Alliance Defending Freedom (ADF), one of the most respected religious liberty law firms in the country.

Far from hating, the ADF is dedicated to defending the religious liberty of all Americans. ADF attorney Kerri Kupec explained that her organization's mission is to be an advocate for people to be able to live their faith without the threat of prosecution.

But because all Americans includes Christians who disagree that sodomy is healthy, the SPLC launched a smear campaign against them.

The ADF is respected across the country, arguing cases before the U.S. Supreme Court. They stand with bakers and florists, often pro-bono, against lawsuits forcing them to betray their sincerely held beliefs. In the last seven years, the ADF has won seven Supreme Court cases of infringement of First Amendment rights. (They just won Trinity Lutheran v. Comer by a high court vote of 7-2.)

ABC News did not offer any evidence that the ADF has any hateful bias toward anyone. Nevertheless, the Madden-Galloway feature, which was ostensibly about the Attorney General's presumed “anti-LGBTQI” speech to the ADF but never dug deep enough to quote a line from it, focused on “hate.” In fact, the ABC News piece used the word “hate” 11 times in the short report.

Not surprisingly, NBC News, Newsweek, The Daily Beast and others joined the “hate group” chorus against the ADF.

In a statement calling out ABC News and demanding an apology, Kupec accused the media giant of “journalistic malpractice.”

“For ABC News to essentially cut and paste false charges against Alliance Defending Freedom by a radically left-wing, violence-inciting organization like Southern Poverty Law Center is a discredit to ABC News and to the profession,” Kupec charged. “ABC News has committed journalistic malpractice.”

“For the sake of its own integrity, ABC News should issue an apology to Alliance Defending Freedom and retract the defamatory story,” Kupec insisted.

Critics say this is just another example of why Americans have lost trust in the mainstream media. “Americans’ trust in media is cratering, and the blatant bias and lack of professionalism that ABC attempted to pass off as news can only serve to confirm and intensify that distrust,” Kupec observed.

“It is biased stories such as the Sessions-ADF one that give rise to public mistrust of the media,” the Catholic League's Bill Donohue noted. “This is beyond ‘fake news’ — it is a mean-spirited and ideologically driven assault on Christian activist organizations.”

“ABC News label(ing) such a respected and revered law firm as a 'hate group' is not just shameful – it’s an outright lie,” fellow journalist Todd Starnes scathingly critiqued. “Reporters Madden and Galloway should be ashamed of this disgusting piece of propaganda.”

Many conservatives agree, and went to the Twittersphere to express their outrage against ABC News and other mainstream media anti-religious bias:

What a shameful and vicious smear by @NBCNews. ADF upholds marriage. If that makes them a “hate group,” every Xtian church is a hate group. https://t.co/Nm2mI9nhX6

Smearing Christians who believe the Bill of Rights secures religious liberty as a “hate group” is how you got Trump. https://t.co/C4jCRdaReN

Coming to the SPLC's defense was President Richard Cohen. He doubled down on the attack.

Cohen accused the ADF of “spread(ing) demonizing lies about the LGBT community” without listing a single instance. Cohen also charged that the ADF wants homosexuals “back in the closet for fear of going to jail,” something the ADF has never advocated. He concluded that “the ADF is doing everything in its power to deny the equal protection of the laws to the LGBT community” — again, a stand the ADF rejects.

Cohen and his SPLC's blatant prejudice against Christians and Christian values is apparent in its listing of any organization disagreeing with the gay and transgender agenda as “hate” based. The SPLC even labels mainstream pro-marriage and pro-traditional family organizations as “hate groups,” including the Family Research Council, the American Family Association, D. James Kennedy Ministries, Faith 2 Action, Liberty Counsel, Citizens for Community Values, and evangelical churches.

The “Southern Poverty Law Center is a far-left partisan goon squad that labels any ideology they oppose as hate,” Starnes, a Fox News columnist, added.

The SPLC slander is simply without restraint. Whole churches that teach children need both a mom and a dad are described by the SPLC as “in a white-hot fury” of hate. Without offering any corroborating evidence, the SPLC ruthlessly defames them. “These groups are really vile and nasty,” they declare.

All in the name of civil rights.

Once a respected civil rights champion, the SPLC indiscriminately places Senator Paul Rand alongside Nazi skinheads. The SPLC even named Dr. Ben Carson to its “hate” list, and only removed his name when a flood of bad publicity followed.

Anyone disagreeing with the fallacy that Islam is peaceful gets labeled an SPLC “hater,” too. Somali human rights activist Ayaan Hirsi Ali received the SPLC's “Anti-Muslim Extremist” designation for her criticism of Islam.

“Southern Poverty Law Center spends its time and money attacking veterans, nuns, Muslims who oppose terrorism, Catholics, Evangelicals, and anyone else who dares disagree with its far-left ideology,” Kupec added.

The mainstream media's complicit bias is demonstrated not only in being an unfiltered mouthpiece for the ultra-liberal SPLC but in its hypocrisy at not doing so for select, favored groups.

The New Black Panthers and their racist agenda made the SPLC's list but did not get the same treatment as Christian groups. When Sessions noted alleged New Black Panther voter intimidation, The Daily Beast didn't mention its “hate group” listing. Ditto when The Daily Beast wrote about the group in an article about the Dallas police shooter. NBC News, likewise, ignored the group's SPLC listing in two articles.

But for Christian groups like the ADF, the “hate” listing gets center stage, focusing the entire article on it.

The SPLC even admits its bias. Heidi Beirich, the SPLC's Intelligence Project director, conceded to Politico that the group is “focused, whether people like it or not, on the radical right.” The reason the SPLC targets the right, she added, is because “we believe that it’s uniquely threatening to democracy.”

Politico concluded that the SPLC has become “more of a partisan progressive hit operation than a civil rights watchdog … labeling legitimate players 'hate groups' and 'extremists' to keep the attention of its liberal donors and grind a political ax.”

The SPLC's tactics have not gone unnoticed internationally. Israeli Ambassador to the U.S. Ron Dermer, after receiving pressure from the group, condemned the SPLC as “defamers and black-listers.”

And being blacklisted by the SPLC destroys entire organizations. Donations dry up and liberal protesters harass labeled groups.

The purpose of SPLC blacklisting is to silence dissenters. Cornell Law Professor William Jacobson attests that the group uses its civil rights past to legitimize an anti-Christian crusade. He says the SPLC exploits “the reputation it gained decades ago fighting the Klan as a tool to bludgeon mainstream politically conservative opponents.”

And the SPLC's hate-targeting has literal life-and-death consequences. After the SPLC listed the Family Research Council (FRC) as a “hate group,” homosexual activist Floyd Lee Corkins entered the FRC building with a gun and 100 rounds of ammunition, shouting “I don't like your politics;” and started shooting Christians. He later admitted to trying to “kill as many as possible,” specifically because the SPLC listed the FRC as a “hate group.”

Last month's attempted massacre of conservative legislators was attempted by a follower of the Southern Poverty Law Center.

Nevertheless, the federal government lends legitimacy to the SPLC. The American Family Association’s Meeke Addison concluded that the Obama administration's FBI contributed to the SPLC's stature.

“The FBI's past acknowledgement of SPLC only served to validate a political organization's fundraising efforts,” Addison said. “The FBI's dissolution of any type of relationship with the SPLC is long overdue.”

Liberal presidents and would-be presidents welcome the SPLC's guidance on policy. The SPLC worked with the Obama administration, and up to the day before last fall's election, the SPLC “coordinated” with the federal government in anticipation of a Clinton victory, according to Politico.

As for Sessions' speech to the ADF, he noted America's heritage and founding fathers' respect for religious freedom. “Our freedom as citizens has always been inextricably linked with our religious freedom as a people,” Sessions said. He talked about the positive contribution “our faith communities” make to society. He defended the Religious Freedom Restoration Act, which Congress passed in 1993.

“This Department of Justice will never allow this secular government of ours to demand that sincere religious beliefs be abandoned,” Sessions promised. “We will not require American citizens to give intellectual assent to doctrines that are contrary to their religious beliefs.”

“We will defend freedom of conscience resolutely,” Sessions concluded. “Every American has a right to believe, worship, and exercise their faith in the public square.”

The Attorney General's speech can be read here.