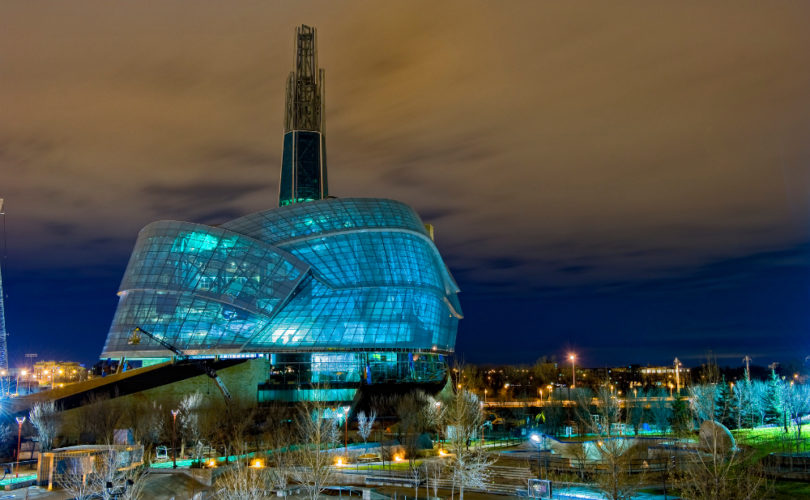 The Canadian Museum for Human Rights in Winnipeg

The opening of the Canadian Museum for Human Rights last month caused quite the commotion, as any event involving the status of minority groups does. When I arrived the day before the September 19 Grand Opening, dozens of special interest groups with various grievances were already converging on the museum. The Idle No More people were idling across the road in a few tents like a relaxed Occupy group. Some Palestinian activists who had apparently not realized that the museum was the brain child of a man named Israel Asper were insisting that the museum address their grievances with a few vague signs. A few indie bands no one has ever heard of were cancelling their concerts in protest of various museum oversights, probably garnering them the first media coverage they’d ever received. And I, of course, was there to help facilitate a display outside that the Canadian Museum for Human Rights would never countenance setting up inside: Photos of the victims of abortion.

Canada’s abortion crowd had been quite thrilled by the announcement that the Canadian Museum for Human Rights would be more or less officially pro-abortion. The day I arrived, the Winnipeg Free Press reported the following:

It's all fair save for the fact the subject of that exhibit is called The Safety of Women. It is a reference to the 1988 Supreme Court decision that found using the Criminal Code to deny a woman's access to safe abortion services violates her rights to “security of the person” under the Charter of Rights and Freedoms.

The exhibit is factually accurate, and unfailingly fair. Having said that, the title of the exhibit leaves no doubt the museum is celebrating the SCOC decision as a victory for human rights. That alone will be viewed as offensive by those who condemn abortion.

Upon reading this, abortion activist Fern Hill of the profane and pro-abortion stream-of-consciousness blog “Dammit Janet” promptly took a break from her usually Mallick-like denunciations of Canada as Saudi Arabia to do a victory lap. “Take your foul postcards and go home, it’s over!” she cackled, “…It's all over. The fetus freaks have lost. Decisively.”

That’s a bit cute, I thought as I read it. We just got here.

After all, just as Justin Trudeau is not in the habit of hearing opinions on abortion from “old white men,” the young, emergent pro-life movement is not in the habit of taking advice from the aging Third Wave feminists like Fern Hill. The majority of us weren’t even around when our politicians last had a serious debate about the human rights of the pre-born. In fact, when I recently looked up in the Parliamentary Library what was being debated in the House of Commons the day I was born on July 25, 1988, it turns out it was the post-Morgentaler “Abortion Law Interim Measures Act.” Both the age gap and the intensity gap are showing—when Canada’s pro-choice “movement” tried to hold a day to celebrate and defend abortion rights, pro-life counter-protestors outnumbered abortion activists at almost every rally across the country.

But I digress. Back to the museum.

At 9:00 AM sharp on Saturday morning, my friend Emily and I headed into the Canadian Museum for Human Rights on the first official tour. The building was gorgeous—a beautiful open concept, with alabaster walkways crisscrossing overhead. Huge quotes describing human rights in the 21stcentury were affixed to the walls. And dozens upon dozens of headshots of various human rights campaigners throughout history, people like Martin Luther King Jr. and Ghandi.

And, mixed in with genuine human rights heroes, were the heroes of Ms. Fern Hill and her ilk: Betty Friedan, one of the early leaders of the National Abortion Rights Action League, and Gloria Steinem, a prominent and long-time advocate for legal abortion. Henry Morgentaler, the philandering crusader for legal abortion in Canada was also celebrated—no surprise, of course, since he has already received the Order of Canada for all his fine work in assisting the extermination of the next generation of Canadians.

The tour lasted less than an hour, since it turned out most of the exhibits had not been completed in time for the Grand Opening. Additionally, there wasn’t actually a lot to look at—the CMHR seemed to embrace the modern museum concept that emphasizes computer screens over actual historical artifacts. I noticed a quote by Canadian Chief Justice Beverly McLachlin on the way out: “Like every other human institutional endeavour, justice is an ongoing process. It is never done, never fully achieved. Each decade, each month, each year, indeed each day, brings new challenges.”

Today’s challenge was that it was freezing cold and pouring rain, and we had an anti-abortion display to set up outside the museum. We were worried—would anyone show up in the rain?

And then, pro-lifers of all ages began to show up. First twenty, then forty, then fifty—the number kept growing. We ran out of signs to give people, so they clustered under umbrellas beside other volunteers. We split from one group of demonstrators, to two, to four, setting up abortion photos alongside the long lineup to get into the Museum. A few volunteers began to walk up and down the lineup, handing out pamphlets. One elderly man told me apologetically that it was too cold for him to stay out for longer than an hour, but he would do his best. And for four long hours, dozens of pro-lifers displayed the truth to those lined up waiting to get into a museum that hid the truth.

It was an exhilarating experience to be part of—men and women of all ages, coming out in the pouring rain to share the truth about Canada’s treatment of pre-born children, to reveal to passersby and Museum attendees that our country’s work in the area of human rights was far from over.

So no, it’s not over. And museum displays, far from being the titanium-and-concrete monuments impervious to change that Ms. Fern Hill thinks they are, are constantly being updated. While I’m sure that Ms. Hill’s blog inspires legions of abortion activists to action, they’ll find they have a tough time matching the momentum of the “savvy, youthful makeover” the Toronto Star observed in pro-life movement. Because there’s a reason that the activists of the abortion movement are in a museum: Because abortion activists are a thing of the past.

Pro-life activists, standing up for the futures of human beings in the womb, are the future of Canada. And just like those working on the unfinished exhibits inside the Canadian Museum for Human Rights, we have more hard work to do.