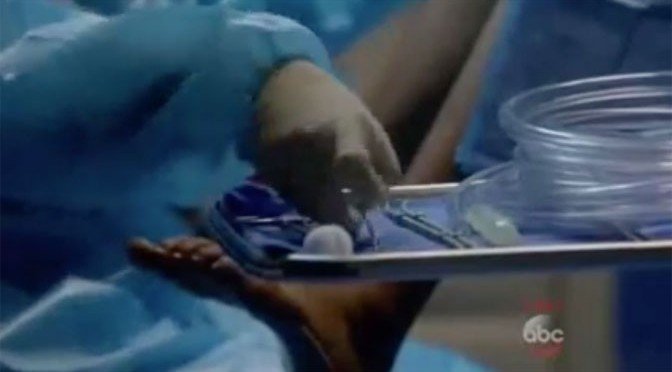 November 23, 2015 (LiveActionNews) — All of these breathless accolades at once can only mean one thing: another TV character’s gotten an abortion.

Live Action’s Cassy Fiano has excellently dissected the moral backwardness and political deceit teeming from this week’s episode of the ABC political drama Scandal, in which Kerry Washington’s lead character Olivia Pope has an out-of-the-blue abortion, though there’s one more aspect of the episode, and a few gems from its fans, that warrant further attention.

First, this line from Bustle’s Pomarico:

Fitzgerald Grant, the show’s President of the United States, is implied (though not confirmed) to be the father, and the dutiful “reproductive justice” enthusiasts are totally cool with keeping him in the dark that he had a son or daughter, but doesn’t anymore because Mom decided to kill him/her.

It’s another flippant, callous reminder that according to pro-abortion orthodoxy, fathers’ feelings on the deaths of their children simply don’t matter. Because only a right-wing, anti-choice religious nut would think that “gender equality” means equally affirming the worth and dignity of both sexes’ perspectives. No, apparently it actually means women should be just as duplicitous and insensitive as they imagine men to be. Modern, dominant feminism isn’t a moral quest; it’s a revenge fantasy.

Appallingly, our next nugget, the opening paragraph of Saraiya’s Salon post on the subject, might make the above seem positively merciful by comparison:

Say what you will about last night’s winter finale of “Scandal,” “Baby, It’s Cold Outside”—I found it a little sloppy—but on the issues, it’s magnificent. And pointed: That title is macabre, given that we watch Olivia Pope (Kerry Washington) go to a deserted clinic on Christmas Eve to undergo a first trimester abortion. A machine vacuum aspiration uses suction to withdraw fetal tissue. Baby, it’s cold outside, indeed.

Baby, it’s cold outside, indeed? Even if the episode title’s appropriation of the classic Christmas tune’s name wasn’t originally meant as a grotesque pun, Saraiya certainly made the connection. She may have taken smug satisfaction in her “cleverness” and not given it a second thought, but I hope the “humor” was worth the cost—recognizing that we’re talking about babies destroys whatever sliver of plausible deniability pro-aborts have against the charge that they knowingly champion child murder.

It’s one thing to wrongly-yet-honestly believe that abortion is solely a question of women “choosing their own way” (Saraiya’s closing observation) because you aren’t accurately informed about what preborn babies are. It’s quite another to champion abortion while joking about suctioning innocent, helpless children into oblivion. The former could be dismissed as the actions of a naïve but good person; the latter is evidence a sociopath.

Finally, let’s revisit the monologue that plays over the abortion scene (from Olivia’s father):

Family is a burden… a pressure point, soft tissue, an illness, an antidote to greatness. You think you’re better off with people who rely on you, depend on you, but you’re wrong, because you will inevitably end up needing them, which makes you weak, pliable. Family doesn’t complete you. It destroys you.

The normalization of abortion made this episode shameful. The pro-Planned Parenthood filibuster scene made it dishonest. But this makes it simply bizarre.

Here you have the writers going out of their way to link having an abortion with a brutally mercenary and anti-family viewpoint, unmistakably suggesting that abortion is valuable not because it’s compassionate, but because all loved ones are impediments to selfish gain.

And this was supposed to be a pro-choice message?

If you asked me to write a damning caricature of pro-abortion ideology, meant to make the other side look as unsympathetic as possible, I’m honestly not sure I could have come up with anything better. And yet, pro-aborts wrote this, and pro-aborts including Planned Parenthood are widely cheering it as an affirmation of their values. They think it makes them look good.

Are you really this tone-deaf?

Just as when they overwhelmingly swooned over the House of Cards episode that depicted lying as a virtue when it’s in service of abortion, this is another golden example of the abortion movement’s cultural wing inadvertently revealing that its principles are far more radical and less noble than its political wing wants America to believe.

That’s really been the defining theme of the past several months: pro-aborts letting the mask slip, showing the world the greed and cruelty festering behind the facade of privacy and compassion.

Live Action has launched a petition here to demand the ABC end the pro-abortion propaganda.