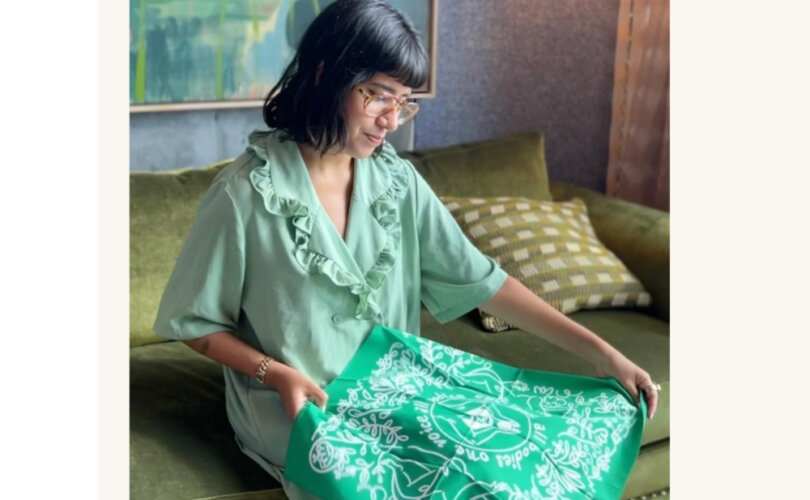 Promotional image for the pro-abortion bandanaScreenshot/Oui the People

(LifeSiteNews) — Bandanas seem to be the “in” thing right now. Both men and women can wear them—around their necks, in their hair, on their heads, or they can even put them on their pets. But one company has decided to make a disgusting political statement about abortion with its bandana.

This overt attempt to advocate for abortion comes from a company called Oui the People, and it has designed a green bandana with the words “All Bodies One Voice, One Voice All Bodies” prominently displayed. One hundred percent of the proceeds from the sale of this item go to the Whole Woman’s Health Alliance— “a not for profit committed to providing reproductive care for their patients, including abortion care and eradicating the stigma around abortion.”

Oui the People’s website claims that the inspiration for this green bandana came from “the Latin American abortion-rights movement” and that its green color symbolizes “nature, growth, and reclaiming the term ‘pro-life.’”

It then goes on to claim that “abortion is healthcare” and that abortion is a “human right.”

Hopefully, this nonsense has attracted your attention. Yes, this may seem like a minor thing. “It’s only one company,” you say. Except it’s not. “You’re making a mountain out of a molehill,” you lament. Except we’re not.

Things like this are happening all over our country. And this is exactly the attitude that the culture of death hopes we have: silence equals tacit approval. Remember that “the only thing necessary for the triumph of evil is for good men to do nothing.”

Evil will win if we do and say nothing when we see atrocities like this.

If we shake our heads and scroll to the next news item, we let the pro-aborts win. And you know who loses? The babies.

They lose because it is the truth that a baby dies in every abortion.

READ: Thousands of babies survive abortions each year. The abortion industry wants to erase their existence

Companies like this work so hard to make “inclusive” phrases like this sound good and welcoming, but they actually exclude (i.e., kill) so very many people.

We can never say it too many times. A baby is killed in every abortion. That baby doesn’t have a voice in the matter. That baby is disregarded and thrown away so that the mother can do what she wants.

It is most certainly not all bodies, one voice.

The false sense of unity this bandana attempts to create is something people all too willingly fall for. It’s mob mentality at its best. As we know, things are much easier to do if someone else is also doing it, for no one likes to be the standout. No one likes to be alone.

Yet isn’t that what the preborn baby is? Alone and dependent upon his mother and on pro-life people to speak for him.

— Article continues below Petition —
URGENT: Say No to the UK introducing a “right” to abortion
Show Petition Text
10634 have signed the petition.
Let's get to 12500!
Thank you for signing this petition!
Add your signature:
Show Petition Text

Now Oui the People wants to sully the term pro-life by saying it will “reclaim” the term and apparently change its meaning to include death. As Inigo Montoya says, “You keep using that word. I do not think it means what you think it means.”

The same can be said for the terms “healthcare” and “human right.” We know that abortion is neither and that this deceptive language is only meant to get people to hop on the proverbial bandwagon. Healthcare takes care of people; it does not intentionally kill. And please let’s stop fooling ourselves by saying that abortion is a human right. It simply is not.

A right is something to which a person is justly entitled. We have a right to life and liberty. But we do not have a right to kill an innocent person. A desire to do something does not equal a right, no matter how you spin it.

Day after day we see more of these types of infringements on the values we should hold dear. Seemingly innocuous things—like a bandana—are usurped for the culture of death’s agenda. Done repeatedly, they become ingrained in our culture. And slowly, people become a little more ignorant and a little more tolerant.

So, beware of insidious things like this bandana. Take a stand. Speak up. Realize that there are people who like to brazenly wear these outward signs of hatred for babies while disguising them as love for women. But we know the truth. We know that to truly be pro-life we must love both the mom and the baby and care for them both.

So, while pro-aborts wear bandanas as their outward sign of disdain for babies, we must decide what our outward sign of love for moms and babies will be. It’s not time to remain silent. It’s time to stand up and give a voice to the babies who are so callously discarded. Let us do this with love and truth on our side.

And though our argument need not be a religious one, as science proves a baby exists prior to birth, we must never discount the miracle of all human life created in the image and likeness of God—a God who sent His Son here to die for us. A God who allowed Himself to be beaten and scourged. A God who was mocked with a crown of thorns on His head.

And now the pro-aborts mock the preborn child by wearing a bandana on their heads.

How long will we allow this mockery to continue?