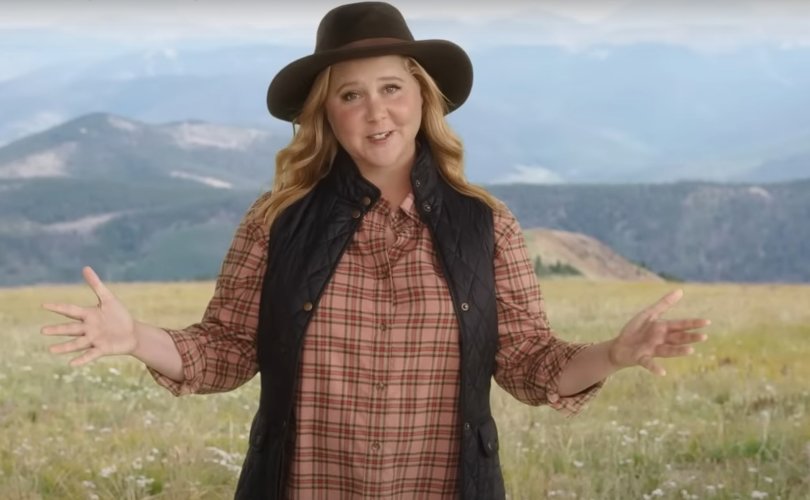 (LifeSiteNews) – As I read article after article about pro-aborts forcing their views on others, bullying politicians, brainwashing children, and demeaning those who cherish and try to protect preborn babies, I feel exhausted and worn down.

Like a salmon swimming upstream, I sometimes think that the pro-life movement will never win. We take the proverbial two steps forward and one step back.

My usual feelings of disgust and disheartenment were taken to new heights when I heard about comedian Amy Schumer’s latest video advertising a new season of her show “Inside Amy Schumer.”

I have never seen the show, and I honestly didn’t know much about her, but after seeing this preview – which is really just a fake ad for Colorado because abortion is legal there – I know all I need to know.

Just like other abortion bullies, Schumer has taken the idea of abortion as a “right” to a new low.

In the video, Schumer stands in cowboy garb and speaks while beautiful outdoor scenes of Colorado fill the screen. She says:

Colorado. Come for the fresh air, the perfect mountains majesty, a magical night under a magical sky. Whatever kind of experience you’re looking for, you can find it here, in Colorado. But we’re more than just beautiful wilderness. We also have bustling town centers and access to all the services you may need.

Here the background cuts to an image of a “Women’s Health Clinic” and the inside of a patient room with a reclining table and a stand for surgical instruments.

We then see Schumer holding a mug. She states: “All as legal as a fresh cup of hot cocoa is refreshing.”

The ad cuts to a couple, and the woman laments, “Visiting here was on our bucket list of things to do before we die, which honestly I might have if I hadn’t been able to visit Colorado.”

Let’s pause a minute to dispel some misinformation. The implication here is that women will die because they won’t receive timely treatment for ectopic pregnancies. Women will not be left to die (nor will they be prosecuted) for having ectopic pregnancies. This is an outright lie purposely intended to make women feel attacked, indignant, and angry. But the more you tell a lie, the more likely people are to believe it, right?

Schumer continues, “There are even organizations that will help you get to Colorado, and experience Colorado, and recover from Colorado as discreetly as you please.”

She then encourages people to open an encrypted browser to search for providers or to use a private browsing window and then to delete their search history “just to be sure.” An insinuation that women will be hunted and prosecuted. Another attempt at angering women. Another lie.

She ends by screaming obscenities.

As I looked through the comments at the bottom of the page, I saw mostly people who thought this ad was funny and people who said they can’t wait for the next season of her show. There were a few people who commented that this was disgusting and not funny, but they were not in the majority.

Of course, abortion is not funny. There is nothing at all funny about killing a preborn child. This callous disregard for human life is so prevalent in today’s society that many now make jokes about it.

The reality is that a baby dies in every abortion. But people don’t want to see that reality. In fact, they want it hidden. Take, for example, a recent motion in Calgary, Canada, to make it a bylaw that pictures of aborted babies distributed as flyers are put in envelopes instead of just left on doorsteps.

A Calgary city councilor said, “Since I’ve been running in politics, I’ve had many conversations with my neighbors on them having this on their doorstep, and they told me stories about how it traumatized them.”

A dead baby is traumatizing. Imagine that.

The images are disturbing, and they are not something that parents would want a small child to see. So, it’s understandable that anyone leaving graphic pictures at someone’s home should be cognizant of who could possibly see them.

But dismembered or burned bodies are the reality of abortion. And though graphic images should be shielded from small children, human dignity from creation onward should not be shielded from anyone. When we don’t teach our children that a human being begins at the moment the sperm fertilizes the egg, when we fail to teach respect for all human beings, when we don’t have frank and age-appropriate conversations with our children about abortion, and when we allow our children to watch people like Schumer and others like her without having a discussion about morality, we do irreparable harm.

Our children – and all of society – deserve to know the truth about abortion. It is our job as parents and as human beings to talk openly and honestly about the reality of killing a preborn child. If we don’t teach them, Amy Schumer and her friends will.

So, stand up and give voice to the babies. Speak the truth: abortion kills and it is no laughing matter.