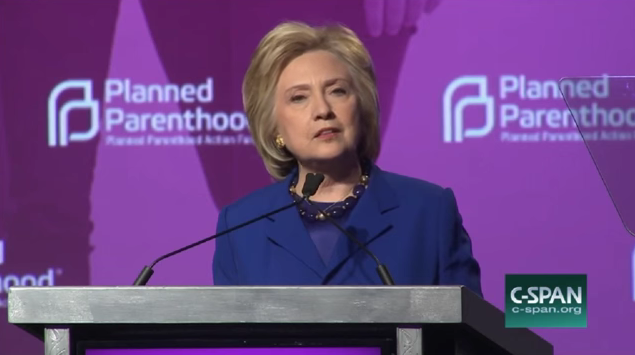 July 15, 2016 (PregnancyHelpNews) — This year marks a significant milestone for Planned Parenthood as it celebrates its 100th anniversary. Within its centennial year, the organization is reinventing itself with new branding and using rhetoric that sounds eerily similar to words used in the pro-life movement.

This significant year also commemorates the first time the controversial organization openly endorses a presidential candidate at the primary stage of the election cycle.

Its choice? Hillary Rodham Clinton—who praised the Supreme Court’s Whole Woman’s Health v. Hellerstedt decision, reiterating that “This fight isn’t over: The next president has to protect women’s health.”

In her acceptance speech of this endorsement, Mrs. Clinton gleefully praised internal and external stakeholders supporting Planned Parenthood, proclaiming her commitment to the fight for “reproductive freedom.”

She promised the nation’s leader in abortions, “as your president, I will always have your back. We will work together and fight together.”

In the speech—as in many prior and since—Mrs. Clinton warned of politicians across the aisle who she said make it their mission to “control” women’s health care.

As I listened to her, I wondered, does she not realize she is doing this exact thing: controlling women’s health care? The one thing that must be examined is the type of “health care” she is championing—abortion.

It seems Planned Parenthood truly believes it is promoting reproductive health care. But, isn’t the main role of health care to improve health and positively elevate the welfare of its patients? Abortion, Planned Parenthood’s main service, does neither. Abortion cruelly ends the life a developing human being for financial gain.

We all witnessed this financial incentive at work in the Center for Medical Progress’ investigative videos, first released last summer. But whether or not abortion produces an additional profit to the industry—which, clearly it does in many cases—it’s also beyond dispute that abortion can severely hinder a woman’s reproductive capabilities later in life.

Regardless of how much we try to rationalize it, that is not optimal health care. It is the introduction of death for two bodies.

Decades ago, a 20-year old, naïve, confused and very fearful young lady grappled with how to deal with her unplanned pregnancy. She was in the midst of her second year of college. She was often labeled as a bright star with unlimited potential to succeed in life.

She had been in a committed, lengthy relationship with someone who—prior to her unplanned pregnancy—had promised her marriage. However, after many “rational” conversations with her then-boyfriend, they agreed the only logical option to choose was an abortion.

Torn and afraid, she allowed her boyfriend to drive her to a clinic. When she walked in, she found no warmth. No one extending true care for her health. The workers at the abortion clinic, offered but one choice—to extract the developing human being inside of her and to do it as quickly as possible.

No counseling. No additional choices offered like equipping her to parent or place the child for adoption.

Later that evening, the young lady began to hemorrhage severely. Though she would recover physically in the short term, the lasting after-effects of her abortion led to a plethora of undesired consequences: bitter emotional turmoil, a conflicted conscience, and, tragically, two more abortions.

Years down the road, this woman finally found genuine care and hope at the foot of the crucified Savior. Alive at last and connected with a local church in love with the saving work of Jesus, this woman found healing at a life-affirming pregnancy center.

No matter how much political pundits, including Mrs. Clinton, would like us to believe abortion is a good thing for women, we know better. We know it is not. Abortion does not bring genuine freedom, but subjective enslavement. Abortion swings the door wide open and ushers death upon women—spiritually, emotionally, mentally and yes, sometimes physically.

In all cases, this precious, developing life entrusted to a mother has been snuffed out forever, never to return.

How would I know about abortion’s negative effects on women? Because that young woman, shuttled off to an abortion clinic and into years of hopelessness and hidden turbulence was me.

But—thank God—so is that woman who found the radical grace of God and discovered the true heart of “reproductive health care.”