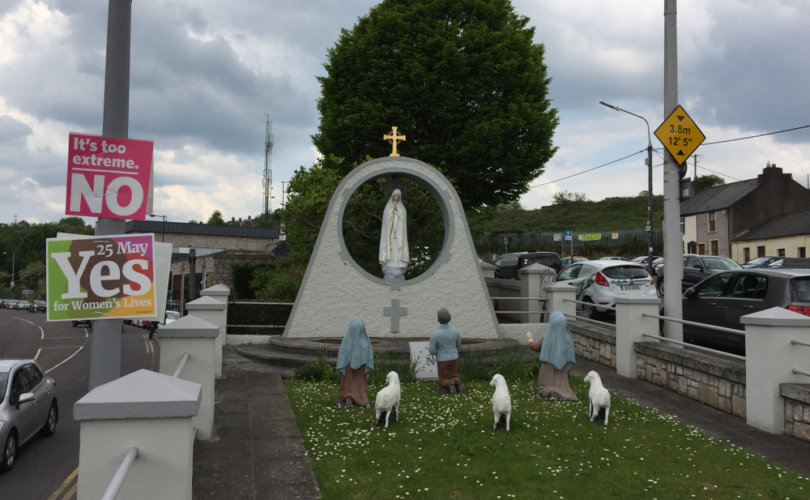 May 29, 2018 (American Life League) — The heartbreaking results of the vote in Ireland last week will leave an indelible and devastating mark, not only on families, but on the entire country.

Thousands of words have been written about the loss of the pro-life campaign in Ireland, but I have not seen a single word about the underlying cause of this outcome.

It was said in times past that Ireland “is a Catholic country,” but was it really? And is it still?

We examined a secular history of the country and found these interesting details:

Irish society also changed rapidly in the late 20th century and the early 21st century. The Catholic Church lost a great deal of its influence in Ireland and church attendance fell sharply. Today Ireland is an increasingly secular society.

Meanwhile Mary Robinson was elected the first woman president in 1990. In 1995 the Irish people voted in a referendum to allow divorce.

Ireland’s Catholic hierarchy was in no position to sway either debate. In 2010, Benedict XVI censured their collective malfeasance in the child-abuse scandal. He told the bishops, “you and your predecessors failed, at times grievously,” noting that their “grave errors of judgment” and “failures of leadership” had “undermined your credibility and effectiveness.” The Irish faith has brilliant and energetic lay defenders and many wonderful priests and religious, but little ecclesial voice.

That “little ecclesial voice” is actually a whimper, and it has been declining for many years.

Add to that the secularization of the country, the growing wealth, and declining Church attendance, and one thing is clear. The die was cast in Ireland years before this vote was ever taken. As has happened in other Western nations over the years, the action of abortion has become the issue of abortion as those who are assigned to teach Catholic doctrine chose to focus on other things instead.

Debates in the public square were never balanced, and as hard as the Irish pro-life leaders worked, the people chose to shut down individual conscience and reason in favor of the siren song of the culture of death. As BioEdge reports, “According to exit polls, women were strongly in favor of repeal, with 70 percent in favor, and 30 percent against. About 65 percent of men voted in favor of repeal. The highest Yes vote was in the capital, Dublin, where some 77 percent voted to repeal.”

Moral relativism in all its twisted reality beat back the truth of Christian doctrine. It was a sad day for Ireland and a sad day for preborn babies. For Ireland and for all of us, this is a time for weeping, for discernment, and for vowing to never stop fighting.

There is an Irish poem that dates back to medieval times. Its words are such that everyone, not just the voters in Ireland, need to study. The message is addressed to Christ, the Lord in whom all things — including a conversion of hearts — are possible:

Let us pray for Ireland, for an end to abortion, and most of all for a renewal of faith as we evangelize for truth and justice.