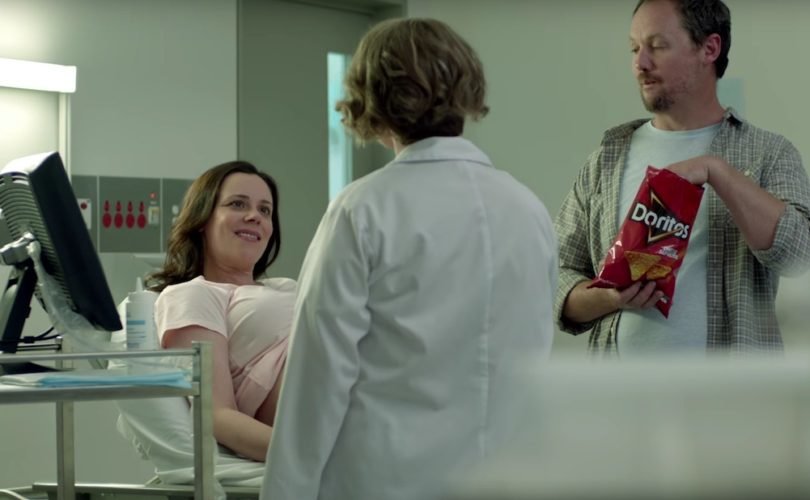 February 8, 2016 (LifeSiteNews) – It's apparently been too long since abortion supporters had the  Tim Tebow Superbowl commercial of 2010 to fuss over, but thankfully for them they've found something new to protest at this year's Superbowl. A contest-finalist Doritos ad shows a late-term fetus interacting with his Doritos-eating father during an ultrasound, moving about as though trying to grab a chip from him, and diving out of the womb to chase after it when his exasperated mom throws the distracting Dorito away.

Unfortunately, the people at NARAL (National Abortion Rights Action League) didn't find the commercial nearly as funny as most of its viral audience already has. Instead they bemoaned the “anti-choice tactic of humanizing fetuses.”

That's right, folks – cause you know, fetuses are these non-human tissue blobs that are merely fodder for dismemberment. Anyone who might show them as the least bit alive is so obviously just “anti-choice”. I mean, how dare the film producer, who apparently used ultrasound footage of his own son in the digitally animated imagery, not champion the message that a woman should have the right to choose death, even for a child about to be born “any day now”?

Unfortunately for NARAL, society is the one who's #NotBuyingIt – and by “it,” I mean their mythology that human development begins at birth. While the ad's depictions are obviously exaggerated for the sake of humour, studies have long shown us that a fetus responds to his/her environment, particularly in the last trimester. They learn and respond to music and language, they become accustomed to taste, smells and the spices of their culture's cuisine… Decades of ultrasounds have pulled open the curtains on the womb and made NARAL's kvetching over a late trimester fetus seem absurd.

We “anti-choicers” don't need to “humanize the fetus”. Fetuses are already human because they are the biological product of two human parents, and because human is a species designation, not a function designation. From the time their bodies first comes into existence at fertilization, fetuses are growing, biological members of our species.

In fact, that's the only reason why another highlight of Superbowl's 50th anniversary, the Superbowl Babies commercial even makes sense. The kids singing Seal's Kiss From a Rose parody are called Superbowl Babies because they were conceived after their parents' team won a Superbowl. They earn their title because their now grown human bodies first came into existence during or shortly after one of the past 50 Superbowls – as opposed to 9 months later.

So, sorry-not-sorry NARAL, but the fact that fetuses aren't conscious, sentient or ordinarily chasing after Doritos is a question of how old they are, not of what they are.

Kristine Kruszelnicki is founder and director of Pro-Life Humanists.