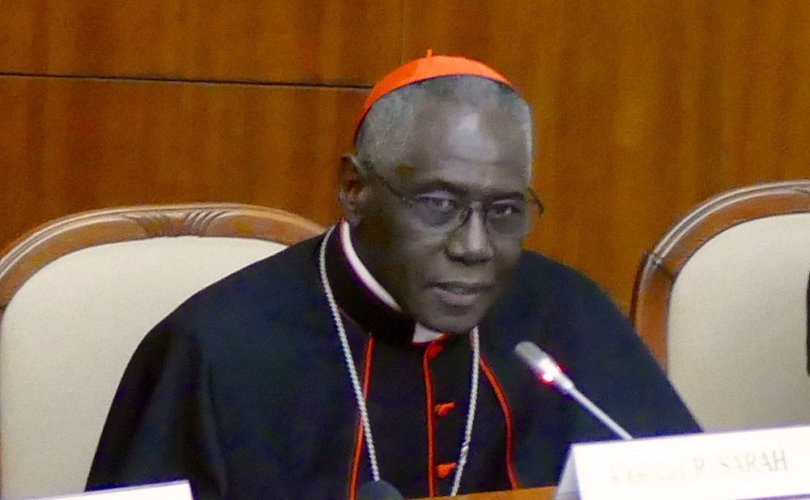 (Crisis) — Why does the West want to annihilate what it built in the first place? The real enemy of the West is the West itself, its imperviousness to God and to spiritual values, which resembles a process of lethal self-destruction.

By this point, the contours of the Viganò debate are pretty clear. Where Archbishop Viganò blames an expansionist NATO and post-Christian West for the war in Ukraine, His Excellency’s critics believe he is not only whitewashing the harsh realities of Vladimir Putin’s regime but also ignoring key points of just war doctrine. As the archbishop often employs apocalyptic language to describe the convoluted machinations of globalists, there is also concern that he is turning into an eccentric conspiracy theorist. Rather than add to the already sizable volume of commentary either for or against Archbishop Viganò, it seems to me more interesting to note that in one sense he is not alone. That is, he is not the only churchman—or even the highest ranking—who has, on occasion, “looked East” to remedy “the errors of the West.”

Indeed, among observant Catholics it would be hard to find a living churchman more universally esteemed than Robert Cardinal Sarah. A Francophone native of Guinea, Cardinal Sarah has been characterized by no less a luminary than George Weigel as “a bright shining light,” one whose “faith illuminates the path to authentic Catholic reform.” For the most part, other Catholic commentators seem to share this view. Yet most who have heaped praises upon the cardinal have consistently and conspicuously ignored how dramatically the cardinal’s worldview clashes with that of America’s conservative Catholic establishment. It is not even as if the cardinal’s inconvenient views were curtly dismissed; no, they were not even acknowledged.

For instance, back in 2019 when Cardinal Sarah’s book The Day Is Now Far Spent came out, this writer was struck not only by the book’s emphatic and repeated condemnation of finance capitalism and globalization but also by the utter lack of interest reviewers exhibited toward this part of the book. Pointed statements like “Globalized humanity, without borders, is a hell,” were unambiguous, and surely relevant to the fiery controversies which were still roiling in the wake of Brexit and the election of Donald Trump. Few Catholic journalists have so much as alluded to such remarks.

As far as I know, nobody at all saw fit to notice Cardinal Sarah’s reflections upon U.S.-Russian relations, even though said relations have been a subject of burning interest in conservative Catholic circles for some time now. It was almost as if most Catholic journalists were simply ignoring statements like the following, which could by no means be rendered into safe, conservative-establishment boilerplate:

Here a number of implicit positions on the part of His Eminence should be conceded, positions with which we may or may not agree. For one thing, unlike most Americans, Cardinal Sarah does not accept the idea of a “wall of separation” between church and state. Furthermore, he does not dismiss the Russian Orthodox Church either as a KGB front or a clique of damned schismatics.

Whether right or wrong on such matters, he seems to have been aware of something long forgotten by many American Catholics now sporting Ukrainian flags: The 2014 coup, backed by the Obama administration, which overthrew Ukraine’s pro-Russian government. (If nothing else, those critical of Washington’s hysterical reaction to January 6 might find it interesting to contemplate the U.S. State Department’s support for Ukrainian regime change via organized militias, street fighting, and Molotov cocktails; the truth is that the hypocritical American elite have no problem at all with violent insurrection, provided said catastrophe happens to somebody else.)

We might also recognize that, while the cardinal’s support for Russia against a post-Christian West was not so flamboyant and extravagant as Viganò’s, it was still well beyond the pale of political correctness, even back in 2019:

John Paul II was convinced that the two lungs of Europe had to work together. Today, Western Europe is employing extraordinary means to isolate Russia. Why persist in ridiculing that great country? The West is displaying unheard-of arrogance. The spiritual and cultural heritage of the Russian Orthodox Church is unequaled. The reawakening of faith that followed the fall of Communism is an immense hope.

At this point, the support the Russian government shows for Russian Orthodoxy is treated as a mark against it, as a sign of manipulativeness. For his part, Sarah takes for granted that the preservation of a nation’s Christian heritage is a good thing, regardless of how shallow the motives of politicians. “The West seems happy to see its churches turned into gymnasiums, its Romanesque chapels fall into ruin, its religious patrimony threatened by a total desacralization. Russia, on the contrary, is spending considerable sums to restore the treasures of Orthodoxy.”

And as if to drive home his comparison, Cardinal Sarah contrasted American and Russian involvement in the Middle East, yet again in favor of the Russians:

The Obama administration tried to bring freedom to the Syrians. Today the country resembles an expanse of ruins. Without Russia’s intervention, an Islamist regime would have ended up winning the day. The Christians of that country owe their survival to Moscow. Russia played its role as protector of the Christian minorities, most of them Orthodox. The Russian government intended to defend a religion, but also a culture.

Again, all of these remarks were published several years ago, so none of this is meant to put words in His Eminence’s mouth regarding the current situation. His current Twitter account indicates—unsurprisingly—that he laments the war, and the death and destruction, and would like to see a peaceful resolution. It hardly seems plausible that he would condone the invasion of one country by another, whatever the backstory. Yet given his previous critiques, it seems likewise doubtful that he would blame the war entirely on Russia, much less that he would rally around the Western banner.

To understand why, we need to remember that Cardinal Sarah’s perspective is informed by experiences radically different from those of, say, a suburban American Catholic. As a native African, Sarah retains an appreciation for the organic, tribal ties which Americans have largely discarded. As a post-colonial who is quite at home with French Catholic culture and ideas, he represents a radically counter-revolutionary worldview, one which looks askance not merely at socialism, but at the Lockean liberal project itself:

Western people are convinced that receiving is contrary to the dignity of human persons. But civilized man is fundamentally an heir, he receives a history, a culture, a language, a name, a family. This is what distinguishes him from the barbarian. To refuse to be inscribed within a network of dependence, heritage, and filiation condemns us to go back naked into the jungle of a competitive economy left to its own devices. Because he refuses to acknowledge himself as an heir, man is condemned to the hell of liberal globalization in which individual interests confront one another without any law to govern them besides profit at any price.

In case the reader hasn’t noticed, these are almost the diametric opposite of the sentiments found in the pages of National Review, which sees “liberal globalization” not as a hell but heaven.

Just to be clear, my real point here is neither to advocate a particular view of the war, nor to treat Cardinal Sarah as an infallible prophet, nor to insist that he was right about the state of Russia, about globalism, or about anything else in particular. No, the point is that a high-profile churchman believes that the West’s greatest enemy has never been al-Qaida, ISIS, or China, much less Russia, but rather the West itself—and none of those professing to admire him have seen fit to notice.

Catholic conservatives consistently evade the issue whenever an honored figure—living or dead—parts company with their own narrow agenda of “democratic capitalism.” Maybe this practice is due to dishonesty, or maybe it is mere cognitive dissonance. Either way, the harm it perpetuates goes far beyond foreign policy. If we fall into the habit of carelessly filtering out everything that might challenge us, then it is futile to discuss Cardinal Sarah’s thoughts—or anybody else’s.

Jerry D. Salyer holds a Bachelor of Science degree in Aeronautics from Miami University and a Master of Arts from the Great Books Program of St. John’s College, Annapolis. A veteran of the US Navy, Mr. Salyer now works as an educator and as a freelance writer.

Republished with permission of Crisis magazine.