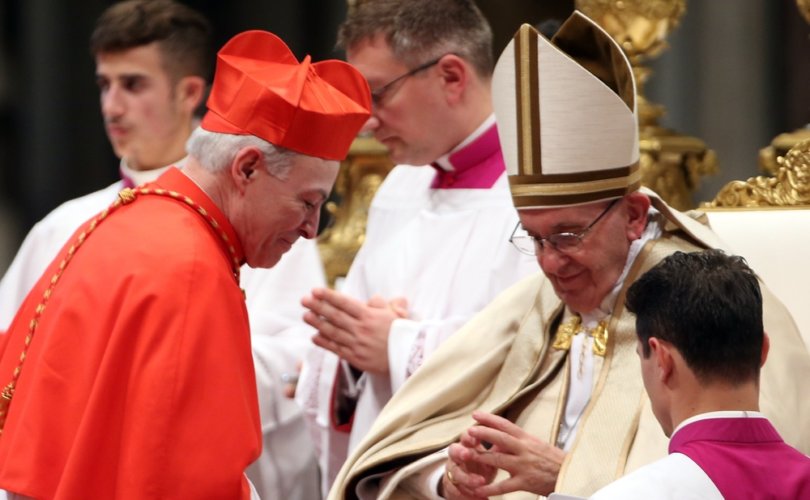 (LifeSiteNews) – If we could ask Saint Gregory the Great, Saint Pius V, Blessed Pius IX, Saint Pius X, and Venerable Pius XII what was the basis of their assessments in deciding on which Prelates to bestow the sacred scarlet of the cardinalate, we would hear from each of them, without exception, that the main requirement for becoming princes of the Holy Roman Church is holiness of life, excellence in particular virtues, erudition in the ecclesiastical disciplines, wisdom in the exercise of authority, and faithfulness to the Apostolic See and the Vicar of Christ.

Many of the Cardinals created by these popes went on to become popes themselves; others distinguished themselves for their contribution to the government of the Church; still others merited to be elevated to the glory of the altars and to be proclaimed Doctors of the Church, like Saint Charles Borromeo and Saint Robert Bellarmine.

Likewise, if we could ask the cardinals created by Saint Gregory the Great, Saint Pius V, Blessed Pius IX, Saint Pius X, and Venerable Pius XII how they considered the dignity to which they had been elevated, they would have responded, without exception, that they felt themselves to be unworthy of the role they held and confident that they would receive the assistance of the Grace of state.

All of these, from the most famous to the least known, considered it essential for their own sanctification to give proof of absolute fidelity to the immutable Magisterium of the Church, heroic witness to the Faith by the preaching of the Gospel and the defense of revealed truth, and filial obedience to the See of Peter, the Vicar of Christ and the successor of the prince of the Apostles.

Anyone who would today pose these questions to the one who is seated on the throne and to those whom he has elevated to the cardinalate would discover with great scandal that the appointment of cardinals is considered to be the same as any prestigious appointment in a civil institution, and that it is not the virtues required for the office of cardinal that lead to the choice of this or that candidate, but rather his level of corruptibility, his blackmailability, and his adherence to this or that political current.

And the same, indeed perhaps worse, would happen if one were to presume that, just as in the things of God the Lord’s ministers must be examples of holiness, so also in the things of Caesar those who govern are guided by the virtues of government and moved by the common good.

The cardinals appointed by the Bergoglian church are perfectly consistent with that deep church of which they are an expression, just as the ministers and functionaries of state are chosen and appointed by the deep state. And if this happens, it is because the crisis of authority which we have been witnessing in the world for centuries and in the Church for sixty years has now metastasized.

Honest and incorruptible leaders demand and obtain convinced and faithful collaborators, because their consent and collaboration derive from the sharing of a good purpose – one’s own sanctification as well as that of others – using morally good instruments to achieve it. Analogously, corrupt and treacherous leaders require subordinates who are no less corrupt and disposed to betrayal, because their consent and their collaboration derive from complicity in crime, the blackmail of the hitman and the one who hires him, and from the lack of any moral hesitation in following orders.

But loyalty in doing evil, let us not forget, is always only for a time, and hanging over it there is the sword of Damocles of the boss remaining in power and of the absence of a more attractive or more profitable alternative for those who serve him.

Conversely, loyalty in doing good – which is rooted in God who is charity and truth – does not know any second thoughts, and is ready even to sacrifice life – usque ad effusionem sanguinis – for that spiritual or temporal authority that is the vicar of the Authority of Our Lord, who is both King and High Priest. This is the martyrium symbolized by the cardinal’s robes. This will also be the condemnation of those who profane it, believing themselves to be protected by the Leonine walls.

It is therefore not surprising that an authority that is based on blackmail surrounds itself with people who are vulnerable to blackmail, nor that a power exercised on behalf of a subversive lobby wants to guarantee continuity with the line that has been undertaken, preventing the next conclave from electing a Pope rather than a vaccine vendor or a New World Order propagandist.

I wonder, however, which of their eminences who dot the foul-mouthed press with their colorful nicknames and the burden of financial and sexual scandals would be ready to give their lives – I do not say for their boss in Santa Marta, who would of course himself take good care not to give his life for his courtiers – but for Our Lord, assuming that they have not replaced him in the meantime with the Pachamama.

It seems to me that this is the crux of the matter. Peter, do you love me more than these? (Jn 21:15-17). I do not dare to think how Bergoglio would respond; instead, I know what these characters, who have been awarded the cardinalate just as Caligula conferred the laticlavius [the rank of senator] on his horse Incitatus in order to show his contempt for the Roman Senate: I do not know him (Lk 22:54-62).

It is the primary task of Catholics – both lay people and clergy – to implore the Master of the vineyard to come and do justice to the wild boars who are devastating it. Until this sect of corrupters and fornicators is thrown out of the temple, we will not be able to hope that civil society will be any better than those who ought to be edifying it rather than scandalizing it.