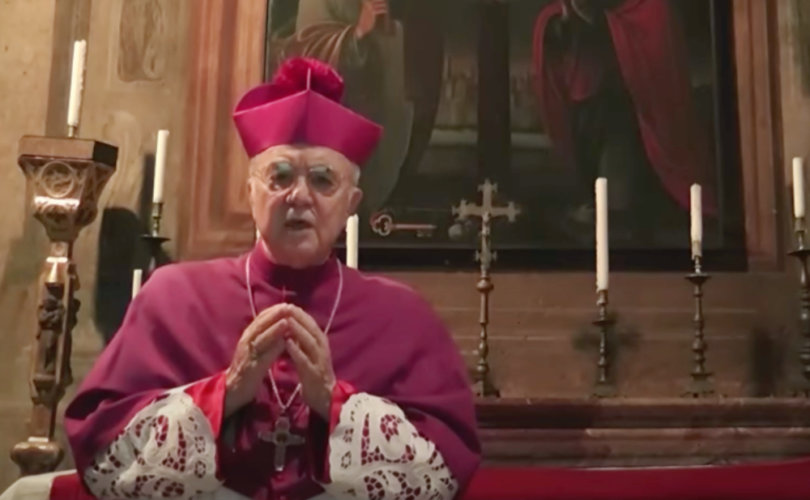 Editor’s note: The following is a message delivered by Archbishop Viganò to the march of reparation held by the Blessed Giovanna Scopelli Association of Reggio Emilia on July 2, 2022.

For those who are participating in this evening’s procession of reparation, and especially for the participants who are less young, it seems almost incredible that in the course of a few decades Italy could have been transformed in such a radical way, canceling the legacy of Catholicism that made her great and prosperous among nations.

We are witnessing a process – apparently irreversible – of apostasy of the Faith; a process which is the opposite of what St. Leo the Great described in celebrating the solemnity of the Holy Apostles Peter and Paul, in which he praised the providential role of the Alma Urbe, the beloved City of Rome: having been a teacher of error, Rome became a disciple of the Truth, wrote the great Pontiff. Today we could say, with the dismay of children betrayed by their father, that the Rome of the Martyrs and Saints having been a teacher of Truth, has become a disciple of error. Because the present apostasy, which involves civil and religious authority in a rebellion against God the Creator and Redeemer, did not start from below, but from the top.

Those who govern public affairs as well as the Pastors of the Church show that they are obedient to the anti-gospel of the world, and while refusing to pay due respect to Christ the King and obedience to His holy Will, they bend their knees before the new idols of political correctness and burn incense before the simulacrum of humanity brutalized by vice and sin. Those who today lead the people in temporal and spiritual things have as their purpose not the common good of citizens and the salvation of the souls of the faithful, but their corruption, their damnation. And the masses, having abandoned the way of honesty, righteousness and holiness, abandon themselves to deception, corruption and infernal revolt against God.

READ: Abp. Viganò: Global liberalism and Communism are destroying the Church and society from within

It is not surprising to see the obscene manifestations of “Pride” along the streets of the cities: the public space that the aberrant have conquered in recent decades had been abandoned well before by Catholics, whose clergy considered professions in honor of the Blessed Sacrament, the Blessed Virgin, and Patron Saints as ostentations of “post-Tridentine triumphalism.”

It is not surprising to see the legalization of divorce, abortion, euthanasia, sodomitic unions and all the worst that a deviant and insane humanity is capable: if this has happened, it is because Catholics were told that they could not impose their own vision of the world and of society, and that they would have to coexist, in the name of democracy and freedom, with the enemies of Christ. And it was a deception, because the tolerance that they demanded of the Christian majority of the country is no longer allowed, and everyone must submit to the dictatorship of aligned thought, gender ideology, and LGBTQ doctrine. Don’t you remember? Marriage was not questioned, but we were asked to accept civil unions. And once the interest groups had been given legitimacy, the door was opened to same-sex marriage, adoptions for same-sex couples, surrogate motherhood, postnatal abortion, and euthanasia imposed in some nations even on young people and the poor.

Scelesta turba clamitat: Regnare Christum nolumus, we sing in the hymn Te Saeculorum Principem for the feast of Christ the King. The delirious rabble shouts: We do not want Christ to reign. That infernal cry, inspired by Satan, is perhaps the only honest thing they can say. And it is true: in the social Kingdom of Christ there is no place for vice; there can be no legitimacy for sin nor tolerance for the corruption of young people. Our adversaries know well that the Civitas Dei and the civitas diaboli are enemies, and that any coexistence is not only impossible but unthinkable and absurd, since Christian society is antithetical and irreconcilable with “secular” society.

You have gathered to give public witness to the Faith, with the intention of making reparation for the sacrileges and blasphemies of the scelesta turba against Jesus Christ and His Most Holy Mother. Because in the face of the cruel and obscene hatred of these rebellious souls we must follow the example of the Lord, outraged by His executioners at the same moment that He sacrificed Himself on the Cross for their salvation. It is in fact Christ himself, with His Incarnation, Passion and Death, who first made reparation for the infinite sins of men towards the eternal Father. For only a God could atone for disobedience to God, and only a Man could offer this reparation in the name of mankind. And we too, who are living members of the Mystical Body of Christ which is the Holy Church, can and must make reparation for the offenses and sins of our fellow human beings with the same spirit, the same obedience, and the same trusting abandonment to the Father.

And while we look with sorrow at the multitude of sins erected as a model to be imitated by a society that is against man precisely because it is against God, the duty of Charity requires us to pray for those who have allowed themselves to be seduced by the deception of the Serpent, so that they may convert and repent. The inclusive world they promised you; the supposed freedom to be and do what you want regardless of the Law of the Lord; the license and vice that is celebrated and the virtue that is mocked and discredited – these are all lies, just as the promise, “You will be like gods,” that Satan made to our first parents in the earthly paradise was also a lie.

I address myself to those who are taking part in these manifestations of so-called “gay pride.” No: you will not be like gods; you will be like beasts. You will not have happiness; you will have pain, illness, and death – eternal death. You will not have peace; you will have discord and quarrels and wars. You will not have prosperity; you will have poverty. You will not be free; you will be slaves. And this will happen indefectibly, because the Liar is a murderer from the beginning, and he wants your death, erasing in your eyes the image of God, stealing from you that blessed eternity that he first lost with his own rebellion. Because the first to sin by pride was Lucifer, with his Non serviam – I will not bend; I will not bow to God;I will not recognize Him as my Lord and Creator. How can you hope that he who hates the Author of life can love you who are His creatures? How can you believe that the one who has been condemned to eternal damnation could be capable of promising you that eternal bliss of which he was the first to be forever deprived?

This procession must not be an occasion for confrontation, but rather an opportunity to show the many people deceived by the Evil One that there exists a people who are animated by sentiments of Faith and Charity, a people which with generosity and with a supernatural gaze offers its prayers, fasts, and sacrifices to implore forgiveness for the sins of their brothers. Charity, founded on the immutable Truth of God, is a tremendous weapon against Satan and an infallible instrument to convert the world and bring many souls back to the Lord. Bring them back to the One who shed his blood even for them, out of love – an infinite, irrevocable love, a love that conquers the world, a love that moves mountains, a love that gives meaning to our life and does not frustrate our existence.

When we see the image of the Savior nailed to the Cross and think of the torments He suffered to ransom and redeem us,we cannot remain insensitive, just as the pagans, idolaters, and sinners of past centuries have not remained insensitive. Societies corrupt in intellect and will, given over to the worst vices, and ensnared by false religions have been conquered by that love – indeed: by that charity – which led the martyrs, even children, women and the elderly not to react against their executioners, so as not to fail in God’s love. How many have been converted by seeing Christians die with dignity as they are persecuted for their faith! How many have been baptized after witnessing the example of Christians and the simple Truth of the Gospel!

And so let us carry out this reparation. Let us do it with a supernatural spirit, convinced that precisely in the humble following of Christ on the way to Calvary we will be able to lead many souls to Him who today are so far away. And the more we see the unleashing of the powers of evil, let us persevere all the more in the good and in the certainty of the victory of Christ, the true and only Light of the world, over the darkness of sin and death.

Let us ask the Holy Spirit with filial trust to infuse His holy Grace into sinners, to touch their hearts, enlighten their minds, and encourage their will. So that those who have hitherto been teachers of error and examples of sin may, through the help and mercy of God and through the intercession of His Most Holy Mother and our Mother, be disciples of truth and an example of virtue. And so may it be.