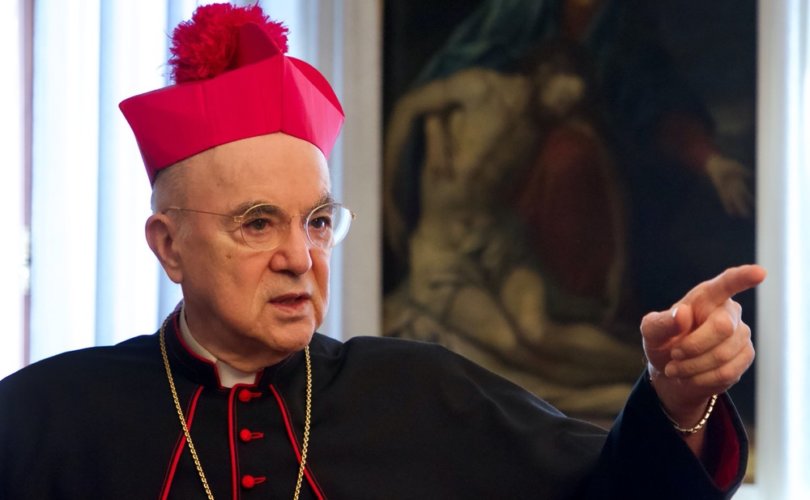 (LifeSiteNews) – On June 24, the Supreme Court of the United States of America, overturning the 1973 Roe v. Wade decision, healed a constitutional vulnus [wound] and at the same time restored sovereignty to the individual states after almost fifty years.

The decision of the Supreme Court did not overrule the “right to abortion” – as the mainstream narrative claims – but rather it overturned abortion’s “obligatory legalization in all of the States,” returning the power to decide about the “profound moral question of abortion” to “the people and their elected representatives,” from whom Roe v. Wade had removed it, contrary to the dictates of the U.S. Constitution.

Thus the attempt to intimidate the Justices of the Supreme Court, which began with the malicious leak of the draft of the decision by members of the pro-abortion lobby, has failed, just as the rhetoric of death of the Democrat left, fueled by extremist movements and groups financed by George Soros’ Open Society, has also failed. And it is significant to see how violent and intolerant the reaction has been from self-styled liberals, from Barack and Michelle Obama to Hillary Clinton, from Nancy Pelosi to Chuck Schumer, from the Attorney General Merrick Garland to Joe Biden, not to mention the declarations of politicians and heads of state from across the Western world.

READ: Trudeau calls overturning of Roe v. Wade ‘horrific,’ gets called out as a ‘hypocrite’

Actually, the following ought to be enough to make people understand the importance of this decision: attacks carried out by “pro-choice” groups, assaults against pro-life organizations, the desecration of churches, scenes of hysteria on the part of supporters of the right to kill the innocent life of the unborn child, emblematically uniting members of the Democratic party financed by Planned Parenthood, which in turn is financed by the government; the Woke Left; the followers of Klaus Schwab’s globalism; members of international Freemasonry; ideologues of green change and demographic reduction; propagandists of gender theory, LGBTQ+ ideology, and rainbow flags; adherents of the church of Satan, who consider abortion as one of their “rites” of worship; those who harvest and sell human fetuses from the death clinics; those who sell “vaccines” produced by human fetuses; and those who support the pandemic farce and their grotesque train of “experts,” all of whom agree that their cultural hegemony is now threatened, a hegemony that since 1973 has caused the death of 63 million children in the United States, who have been offered in human sacrifice to the Moloch of political correctness.

The globalist world, which has made the systematic violation of the human body its own ideological flag by imposing an experimental gene treatment on the population against all scientific evidence, is now tearing its garments as it claims the right of women’s bodily autonomy and the right to kill the life the mother bears in her womb.

This globalist world, in which an elite group of subversive criminals has seized power and ascended to the heights of power in nations and international institutions, has now lost control of the United States of America, thanks to a historic decision handed down by wise justices, including the ones most recently appointed by President Donald Trump, whose commitment to the defense of the sanctity of human life has today achieved a great victory for America and for those who look to her as a model to imitate. Many American states have already declared abortion illegal, and thanks to the decision of the Supreme Court they will finally be able to recognize and protect the rights of the unborn child.

The Vatican Press Office as well as the U.S. Bishops’ Conference are reacting to this historic day with a suspicious moderation, as if it is an embarrassing duty for them. Bergoglio is silent, but he was very talkative when it came to attacking Donald Trump or supporting Hillary Clinton, Joe Biden, and Democratic candidates.

His silence in the face of the victory of the good over the ideology of death of the world without God still echoes the propaganda of the Bergoglian church in support of the so-called vaccines and the Agenda 2030 of the UN, which is one of the main proponents of “reproductive health” that has been imposed on nations precisely since 1973 with Roe v. Wade. Nor should we forget how the Pontifical Academy for Life, founded by John Paul II, has been disfigured over the last ten years by including members who are notoriously in favor of abortion and contraception.

This hatred of President Trump and the network of the deep church’s connections and interests with the deep state have brought to light, among other things, the great contradiction of the Bergoglian church, which is committed to doing business with global high finance and the pharmaceutical companies, even as economic and sexual scandals continue to emerge that involve both politicians and prelates.

On the day on which the Church celebrates the feast of the Most Sacred Heart of Jesus, and also the Birth of Saint John the Baptist, who “leapt in the womb” of his mother Elizabeth (Luke 1:41), the Lord has desired to grant to the United States of America the possibility of redeeming itself, ensuring that its man-made laws are coherent with the natural law impressed by the Creator in the heart of every person. And this is the essential basis that is necessary for a Nation to be blessed by Heaven. One Nation under God.

I hope that the American people will know how to treasure this historic opportunity, and that they will understand that there cannot be justice anywhere the right to abortion is recognized, there cannot be peace and prosperity in a society that massacres its own children, and there cannot be liberty wherever license, vice and pride subvert God’s Commandments.