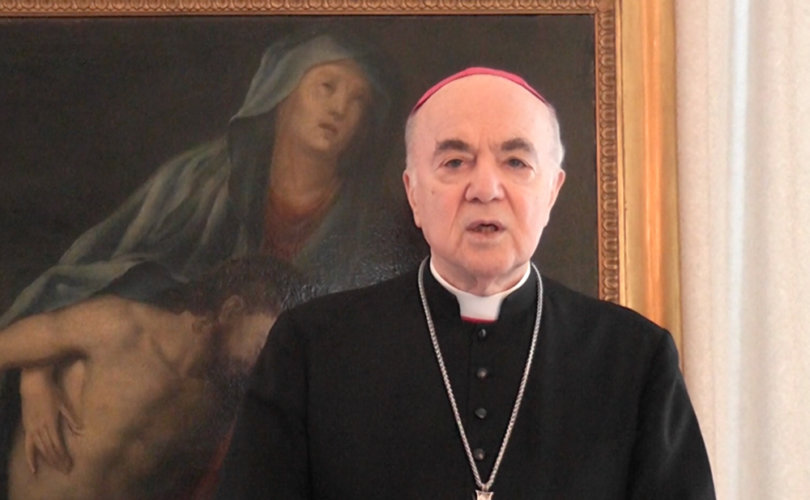 (LifeSiteNews) – Four hundred and fifty years ago, on October 7, 1571, the Christian fleet led by Don Juan of Austria won a resounding victory over the Turks at Lepanto in the Gulf of Patras. That victory, miraculously achieved by the Holy League even though it was clearly numerically and militarily inferior to the fleet of the Ottoman Empire, was attributed to the intervention of the Blessed Mother, who from that day on was venerated under the title of Queen of Victories and Help of Christians: the invocation Auxilium Christianorum that we recite in the Litany of Loreto was added following that miraculous victory. Ever since then we have also celebrated the Blessed Mother as Queen of the Most Holy Rosary.

The banner of the Holy League, which bore the Crucifix flanked by the Holy Apostles Peter and Paul with the motto In hoc signo vinces, and had been blessed the year before in Saint Peter’s Basilica by Saint Pius V – the Pope of the Council of Trent, the traditional Mass, and the Holy Rosary – was entrusted to the Admiral of the Papal Fleet, Marcantonio Colonna. On 16 September 1571 the fleet of the Holy League set sail from Messina, and on 4 October it assembled in the port of Cephalonia in order to advance against the Turks. The League was formed by the King of Spain, the Republic of Venice, the Papal States, the republics of Genoa and Lucca, the Knights of Malta, the Farnese family of Parma, the Gonzaga family of Mantua, the Estense family of Ferrara, the Della Rovere family of Urbino, the Duke of Savoy, and the Grand Duke of Tuscany. Christian Europe united together in order to face the common enemy that was threatening once again after having being repulsed and defeated at Poitiers (732) and at Vienna (1529).

Today our enemy is more subtle and treacherous: those who ought to be our allies, those who ought to help and protect us in the face of a threat that is no less fearful than the one faced then – it is precisely they who are waging a merciless war against us.

Those who ought to defend us are the ones who are supporting the invasion and systematically erasing of our identity, our Faith, our culture and our traditions. In the name of “cancel culture” they have managed to make us ashamed of the Victory of Lepanto, which for four centuries prevented Islam from subjecting our nations to the Crescent Moon.

But if what we are witnessing today had taken place in 1570, the prodigy of that victory would in all likelihood have been impossible. If Saint Pius V had promoted dialogue with Islam, instead of assembling the Holy League; if Don Juan of Austria had conspired with the Sultan out of personal interests, and if the Republic of Venice had been silent about what today we would call “violations of human rights” inflicted by the Ottomans on the Venetians of Cyprus; if the King of Spain or the Dukes and Grand Dukes in Italy had invoked the secular nature of the State, it would never have been possible for the peoples of Catholic Europe to fight and win the victory. Because popular movements – even those motivated by the best intentions – need leaders, charismatic guides, and an authority to guide them and coordinate their action.

This is why the crisis we are going through is so serious: it stems from a crisis of authority, from a lack of moral principles and values that animate and orient those who command even before those who obey. Those who command us are not fulfilling their role in favor of the Italian people but instead are following the orders of a very powerful financial elite. Those who are really in charge today are not themselves part of the Institutions, but they make use of them by bribing their officials, blackmailing those they have placed there in order to manipulate them at will, ousting the honest, and controlling the opposition.

If our leaders really cared about the bonum commune and did not obey those who are ordering them, they would have cured the virus without following the orders of the pharmaceutical industry on the one hand and globalist elites on the other. The same thing also happens in the Church: it’s enough to think only of the way the Bishops have fallen prostrate to the COVID narrative, of how they were so quick to close churches, and how they have recommended that the faithful get vaccinated, using the authority and prestige of the Papacy to sponsor first the gene serum and now the ecological transition, another obsession of the Great Reset theorized by Klaus Schwab Rothschild.

Politicians, parliamentarians, magistrates, doctors, journalists, and clergy: they are all subservient to the psycho-pandemic narrative and equally ready to uncritically accept the absurd and scientifically confused theories of global warming, only because their masters have decided first to speculate on the emergency pandemic and now on the so-called “green emergency,” using another emergency as a pretext to impose the “green pass” – which is not called “green” by accident – and along with it other deprivations of the natural liberties of citizens.

By now you will have understood that everything that is presented to us as justification for their actions is always and only a pretext that has nothing to do with their criminal intentions. On the other hand, if they told us clearly – instead of only anticipating it in the publications of their conferences for insiders – that they want to reduce the population to slavery, they would not succeed in deceiving anybody.

In all the parts of the world where the psycho-pandemic is in force, the people are taking to the streets to express their dissent. The regime media – practically all media – are systematically silent about what we can all see on the internet, despite the censoring of social media: tens of thousands, hundreds of thousands of people in France, Germany, Holland, Greece, the former Yugoslavian nations, American, Australia, Canada…and Italy. We have woken up a little late, it’s true, but we are beginning to understand that they have deceived us for almost two years, telling us things that do not correspond to reality, saying that there were no treatments, that people were dying of COVID when in fact they were deliberately killing the infected in order to make us accept masks, lockdowns, and curfews. Today they tell us that there are treatments, only because the pharmaceutical houses have patented drugs at exorbitant prices (with still-unknown side effects) which have been available for years at very low prices (without adverse reactions). And no magistrate has anything to say.

You will understand well, dear brothers and sisters, that when an authority whose purpose is the good of the citizens is actually used to corrupt them, impoverish them, enslave them, or even debilitate or physically eliminate them, it does so by usurping power. The obedience to tyrannical laws that is asked of us becomes complicity, because by means of blackmail it imposes on us irrational and potentially harmful actions which in normal conditions we would refuse to carry out. But how can we consider it normal that the doctors do not treat the sick and instead sell themselves to pharmaceutical companies? How can we be silent in the face of conflicts of interest of members of the CTS, the AIFA, the EMA, and the WHO? How can we silently accept the admissions about protocols, about the pandemic plan, about the banning of treatments? How can we continue to give credit to a power that up until today has only inflicted confinements, sufferings, misery, layoffs, bankruptcies, deprivations, suffering, and death upon us? Do you really think that when they tell you that they are doing it for your good, they actually believe it?

This is why there are so many demonstrations and protests, and this is why it is desirable to have a coordination between them that will make them continue to grow and be more and more effective. This is why we ought to hope that the Lord will also arouse honest people motivated by sound principles, noble ideals, and a true sense of duty who can create a concrete and shareable alternative – without Masonic infiltrations and without gatekeepers – to the present bleak political, social, and religious landscape.

But if you are organizing yourselves to confront the threat that hangs over you from a class of politicians, doctors, and journalists who have betrayed all the ideals and ethics that ought to inspire their action, it is also indispensable to give a Christian soul to this civil protest, so that it will remain morally noble and so that it can hope to have success and be blessed by God.

We will soon recite the Rosary together, imploring the Most Holy Virgin’s intercession before the Throne of God, asking Him to intervene today in human affairs, as He has many times in the course of History. You will do so with the Faith and humble confidence of children who run to their Heavenly Mother, knowing that despite their faults they can have recourse to Her, invoking Her once again, promising Her to convert and to do what is possible to restore their Homeland to being a Christian nation, proud of its values, proud to raise the Cross of Christ in public, to bear witness in its laws, institutions, work, and art to the Faith that has made Italy great, that has given it many Saints, that has made its culture fruitful and its business prosperous.

Following the Battle of Lepanto, the Senate of Venice, the “Repubblica Serenissima,” solemnly declared – with an act of devotion that today would scandalize the supporters of the secular State – “Non virtus, non arma, non duces, sed Maria Rosarii victores nos fecit” – “It was not strength, or weapons, or leaders that made us victors, but Our Lady of the Rosary.” Likewise, Saint Pius V had this motto from Psalm 118 engraved on the commemorative coins issued following the battle: “Dextera Domini fecit virtutes” – “The Right Hand of the Lord has Worked Marvels.”

Four hundred and fifty years ago, the Blessed Mother listened to the fervent prayer of the entire Catholic world and granted a miraculous victory to the Christian fleet. Today as well – if we will learn how to pray and do penance as She has asked of us at Fatima and in many other apparitions – the recitation of the Holy Rosary can beg another miracle from Heaven: liberating our beloved Homeland from those who are corrupt and from the traitors who infest our institutions; moving the good to courageously denounce those who have stained themselves with serious crimes; illuminating magistrates and members of law enforcement to fulfill their duties, stopping them from indulging the tyrannical deliriums of self-styled philanthropists and those who serve them; inspiring politicians to carry out the legitimate demands of an exasperated people rather than cynically implementing the elite’s ideology of death.