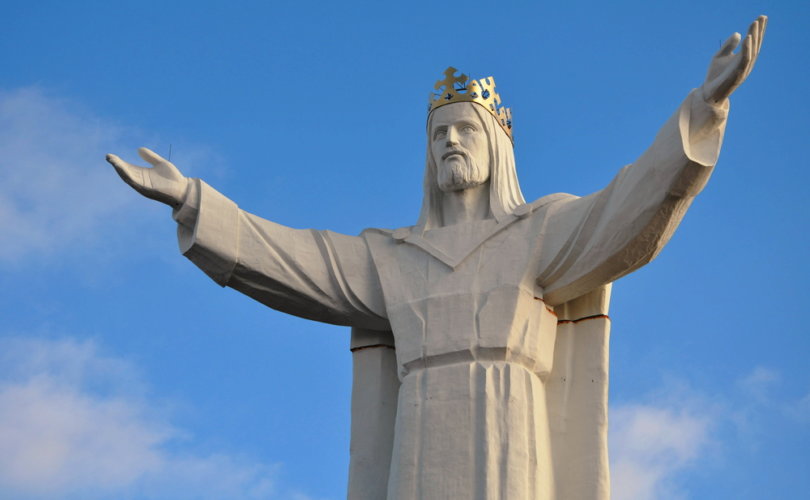 January 27, 2020 (LifeSiteNews) – Grave moral problems are tearing the country apart. For many, this is apparent in the form of broken homes, procured abortion, shattered communities and lost Faith.

Many people get it right when pointing out the problems. However, they get it wrong when looking for solutions.

Some get it wrong because they look for solutions that address symptoms, not causes. Others search for a way out that involves the least possible effort. In these politically correct times, people are told not to offend anyone by their proposals. Thus, they automatically exclude the only real solution, which is a return to Christendom. They are willing to consider any other solution, no matter how absurd or improbable—anything but Christendom.

Christendom! It may seem shocking since its days seem long past. We are supposed to be in a post-Christian era. However, the urgency of our times call for it. We need a Christian civilization if we are going to overcome the present crisis. It needs to be at least considered.

Because our problems are moral, our solutions must also be moral. The rich treasury of Western thought and traditional Church teaching prove that the natural law and Christian morality are the norms that are best suited to our human and social nature. We find our greatest happiness inside institutions and social structures that take us to the end for which we are created—God.

Thus, we should naturally tend to favor Christendom. Everyone, Christian and non-Christian alike, finds the best conditions for prospering inside a family of nations that facilitates virtue and promotes social harmony in this vale of tears.

But everyone avoids this conclusion. We have long been conditioned to reject this line of thought. This Anything But Christendom (ABC) Syndrome curiously applies alike to the political left, right and center. It embraces both secular and religious America. The most rigid tyranny bars anyone from thinking outside the materialistic box.

The ABC Syndrome and the Political Spectrum

Each political sector has its reasons for denying Christendom.

For radical liberals, the ABC Syndrome makes sense. They resent any moral limits to their acts and do not care if there are harmful consequences. Individual pleasure reigns supreme regardless of self-destruction or the death of babies. Thus, a Christian moral code represents an unbearable restriction on their desires to do, think and be whatever they want. Their variant of the ABC Syndrome is to allow Everything But Christendom. Use any letter of the LGBTQ+ alphabet, but never use C for Christendom.

Those on the right have a different approach. We find Christians who truly desire a Ten-Commandment-based moral code, for example. However, they dare not propose Christian morality because the people and media who oppose it appear to be numerous. For them, it has no chance of winning. Thus, they subscribe to the Anything But Christendom approach on how society should be run. Every concession must be made to accommodate others who refuse to accommodate them. Christians dance around all the issues touching on Christendom, but no one dares say the word.

And then there are the radical moderates who want to appear non-radical. In their radicalism, these extremists purge all moral references from the debate. They prefer to tweak the status quo, hoping to avoid the Christendom issue altogether. As society falls apart, this effort proves elusive and ineffective.

Imposing the Christian Will Upon Others

Three main fallacies are used to justify the ABC Syndrome. The first is the mistaken belief that proposing Christendom imposes the Faith on non-believers.

Liberals think that establishing any moral limits means imposing Christianity on others. And yet they have no qualms whatsoever with imposing their anti-Christian will on Christians, on Christian feast days such as Christmas, and the Little Sisters of the Poor. They have no scruples about stuffing a Drag Queen Story Hour world of perversion down the throats of society, despite protests from concerned parents.

Christians cannot impose their Faith on those who do not believe because Faith is a gift from God. It cannot, by its nature, be imposed. However, Christians can and should enact reasonable laws based on the natural law that call for moral restraint to form a just and harmonious society.

Since Aristotle, moralists taught that this natural law is valid for all times, places and peoples. By advocating such moral limits in the law, Christians merely obey the nature of all law, which restricts what individuals might do for the sake of the higher common good.

In proposing Christendom, we are not imposing but returning to an order that conforms to our human nature and which favors our development and sanctification. In submitting their Everything But Christianity agenda, the left imposes on society a destructive system that brings it to ruin.

The second fallacy is that Christendom is so far removed from society’s current state that it is impractical to propose it. The Christian agenda is hopelessly outdated for postmodern times, it is falsely claimed.

There is nothing more outdated than today’s anti-Christian agenda.  As Catholic thinker Plinio Corrêa de Oliveira notes, there is nothing new about divorce, procured abortion, nudity, and moral depravity. Most “modern” proposals are merely recycled pagan vices from antiquity.  Moreover, what could be more foreign to our American Christian heritage than the sudden appearance of transgenderism or the current mainstreaming of Satanic movements?

Indeed, most Americans identify with a return to our Christian roots. They have problems adjusting to the latest barbarisms proposed by a neo-pagan culture.  The debate should not be centered on the age of the ideas proposed but their merits. The automatic exclusion of ideas because some claim they are outdated is foolish and wrong. The only thing that matters is if they are true or false.

Finally, there is the fallacy that it is impossible to change society quickly, especially when most people seem to subscribe to the opposite of a Christian civilization. At best, a Christian restoration is a futile effort, they erroneously claim.

Again this argument sidesteps the merits of ideas. It focuses on the practicality of implementing them. However, this fallacy is as flawed as the other two.

Captivating ideas like homeschooling, for example, have drastically changed individuals and families in a short time. As the last elections have proven, voters will change their positions when convinced of the need to change.

Societies, too, can quickly and radically change. Consider the Sexual Revolution. Within the space of a decade, the sixties radically changed the mores, fashions and manners of that generation and all those that followed. Most people in the fifties were not hippies, but many adopted hippie ways in the seventies as these became mainstream.

The history of the Church is full of fervent missionary efforts in which whole peoples, burdened by their paganism, were quickly converted to the Faith by the efforts of men and the action of grace. These peoples changed their lives wholesale, adopting Christian ways in a short time.

People change their ways when times are empty, and ideas are exhausted. Indeed, it is in times like ours that grand ideas like Christendom have their greatest appeal.

Where Christ Is King

Thus, the time is ripe to debate Christendom. It should be done openly, unapologetically and enthusiastically. Many do not know what Christendom is. Indeed, the ABC Syndrome represents old liberal prejudices that distort the true nature of a Christian society. For too long, our shallow, materialistic society has suppressed the notions of wonder, sublime, and the sacred that correspond to the deepest desires of the human soul.

By engaging in the debate over Christendom, we address the emptiness of our nihilistic society that finds no meaning or purpose in life.

Above all, the failure to debate Christendom is fatal since it means the continued descent into an anti-Christendom of anarchy and unrestraint. This anti-regime is already seen in the dark yearnings of Antifa, anarchists and Satanic movements that call for a world without morality. They advocate the destruction of our nation and the persecution of those who keep the Faith.

These topics need to be discussed. We should not be afraid to proclaim our desire to see Christ as King. Numerous popes have described this Christian society as one that affirms the social Kingship of Christ. In his encyclical Quas Primas, Pius XI says that “Once men recognize, both in private and in public life, that Christ is King, society will, at last, receive the great blessings of real liberty, well-ordered discipline, peace and harmony.”

Only Christendom can be a truly just society for all.