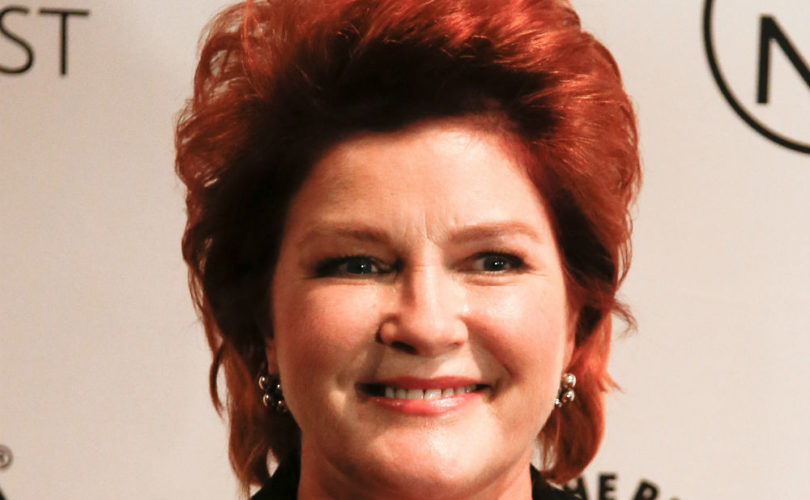 June 9, 2015 (Family Research Council) — The actress, Kate Mulgrew, has had a long career extending back to the mid-1970s when she had her first major role on an ABC daytime drama called “Ryan’s Hope.” Mulgrew’s New York Catholic family in “Ryan’s Hope” resembled her own Irish Catholic family with nine children from Dubuque, Iowa. Portraying “Mary Ryan” must have been charted ground for her, but she took a few detours with great consequences. Mulgrew discusses her life in an autobiography, Born with Teeth, that was published this past April.

Relevant for our purposes is her story relating to adoption. Mulgrew moved to New York to study acting when she was just eighteen, and landed her “Ryan’s Hope” role several years later. She was an immediate sensation, but as her career took off she entered into a sexual relationship with a member of the television production staff and became pregnant. They were both very young. Mulgrew didn’t feel that she could raise a child, but she rejected abortion. Instead, Mulgrew let another family adopt her daughter. Mulgrew was allowed only a brief view of her baby, but that never stopped her from thinking about the daughter from whom she had been separated. It turns out they were both searching for each other.

This CBS Sunday Morning interview sheds light on how the reunion came about over twenty years later in 2001. You meet her daughter and see that they do love each other. One gets a palpable sense of the pain Mulgrew and her daughter experienced. There is heartache and regret, but I also thought that Kate Mulgrew needs to give herself a break. After making that initial mistake, she didn’t make the greater one. And, the mistake she did not make has given her a daughter she loves so intensely. A daughter who loves her in return.

Perhaps, it is too much to wish for, but I hope Kate Mulgrew someday could meet Ryan and Bethany Bomberger who run the Radiance Foundation, a pro-adoption organization. Ryan was conceived in a rape but has lived a wonderful life though through his adoption. Here is the Radiance Foundation’s beautiful statement about their campaign, Adopted and Loved:

PLEASE VISIT OUR ADOPTION AWARENESS INITIATIVE: AdoptedandLoved.com. Millions have experienced the beauty of adoption over this past century. Yet very few people understand the reality of how adoption UNLEASHES the Possibility of not just the child, but the family and the community…and sometimes, the world. Sacrifice is at the heart of adoption, and the reward is great. This presentation illuminates adoption, dispels myths, shares moving personal stories, and provides potential adoptive parents tools and online resources to discover how adoption can change lives.

Adoption is a love story, but not always an easy one. Kate Mulgrew, thank you for doing the good thing and the loving thing when the chips were down.