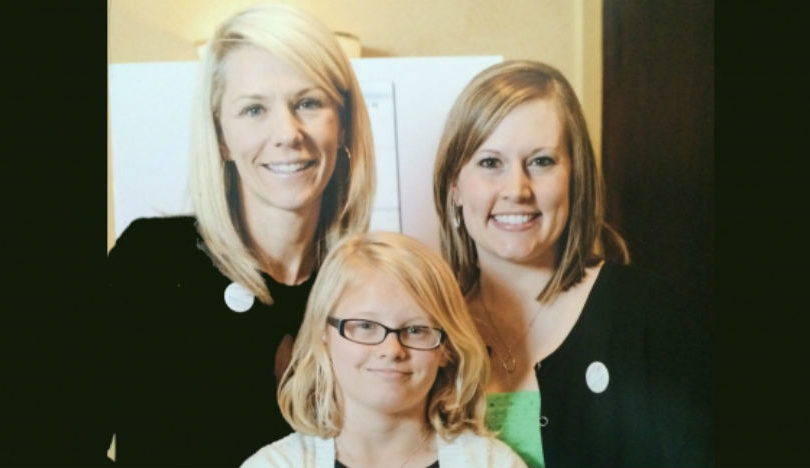 “Amazingly," says Urban, “my daughter looks more like her adoptive mom than me. How could that NOT be God’s gift?" (L-R, Brandi Rarus, Zoe, Jess UrbanJess Urban

At 17, Jess Urban was a rebellious, angry teenager. Her relationship with her (divorced) parents was characterized by lies, sneaking out and pitting parent against parent.

But when she and her boyfriend of only two months discovered she was pregnant, her world turned upside-down instantly.

Angry with God at first for “allowing” her to become pregnant, Urban credits conversations with her dad, mom, and her pastor as the key that allowed the Holy Spirit beyond her heart’s walls.

“We had a real ‘come to Jesus’ meeting,” says Urban. “The lies and sneaking out had to stop. I knew that. [Dad] knew that. But it wasn’t until I spoke with [my] pastor that I began to hear God speaking to me directly.”

From the beginning, Urban’s father encouraged her to consider adoption. He knew she was not in a stable position to raise a baby. Her mother promised to support whatever decision she made. That balance of the two opinions allowed Urban to freely consider all her options.

Urban’s pastor suggested she visit the local pregnancy help organization, Options Pregnancy Center, in Fairmont, Minn. There, she met Jan, who spoke life and truth into Urban’s young heart. Weekly visits helped to confirm to Urban that abortion would not solve any of her problems, despite the cruel things students in her high school would say to her.

“The first day of senior year, I was the talk of the school,” Urban said. “News like this spreads like wildfire. All I remember are the snickers and badmouthing:

‘She’s pregnant?! What a slut’

‘Wow, she’s pretty stupid for getting knocked up.’

“High school can be such a vicious place to begin with, let alone when you’re pregnant,” Urban recalls.

Meanwhile, her boyfriend, who was six years older, struggled with the idea of placing for adoption. He wanted the baby himself, and even went as far as to sue Urban for legal custody after the baby was born. His actions caused her to care for her baby girl for seven weeks until he consented and allowed her to place their child in the hands of an adoptive family.

The time with her baby allowed Urban to bond with her newborn, but also gave her time to grow more and more comfortable with her courageous decision.

Urban knew how hard it was to grow up being shuttled back and forth between divorced parents, and didn’t want that life for her baby girl. As much as she loved this little one and wanted to raise her, Urban knew that the very best solution would be adoption into a family that was ready to love her.

As Urban recalls, the adoption process was fraught “with hope, love heartache, grief and, ultimately, sacrifice”. The first adoptive family she chose “returned” the baby when it was discovered she had incurred significant hearing loss due to an infection Urban had contracted while pregnant. While in the foster care system, however, little “Zoe” learned sign language.

The second set of adoptive parents Urban chose were a gift from God. Both deaf, the Rarus family had three boys and had diligently prayed for a little girl for years. To them, Zoe’s hearing loss turned out to be an added blessing.

Brandi Rarus has since written a book about her own life and her family’s adoption story. Her book is called Finding Zoe: A Deaf Woman's Journey of Identity, Love and Adoption.

Rarus and Urban recently reunited to share their own versions of this adoption process at Options Pregnancy Center’s annual gala.

Zoe, now 11, is thriving in the Rarus home, where she is supported and encouraged.

She also loves her birth-mother deeply. When Jess married in 2012, Zoe was a junior bridesmaid.

It has taken time for Urban’s scars to fully heal.

“When I was pregnant again with my [now-16-month-old] daughter, Adalynn, I struggled with post-partum depression,” Urban said. “All the emotions of having my first daughter came flooding back. I thought I had worked through those emotions, but they came back the moment Adalynn was born. I had always associated pregnancy and birth with grief and loss. It was difficult for me to accept the love and security that God was offering me.”

In light of the fact that fewer than 1 percent of teen births end in adoption, Jess, Zoe and Brandi’s story is an important reminder of the great love and sacrifice that birth moms demonstrate when they choose adoption.