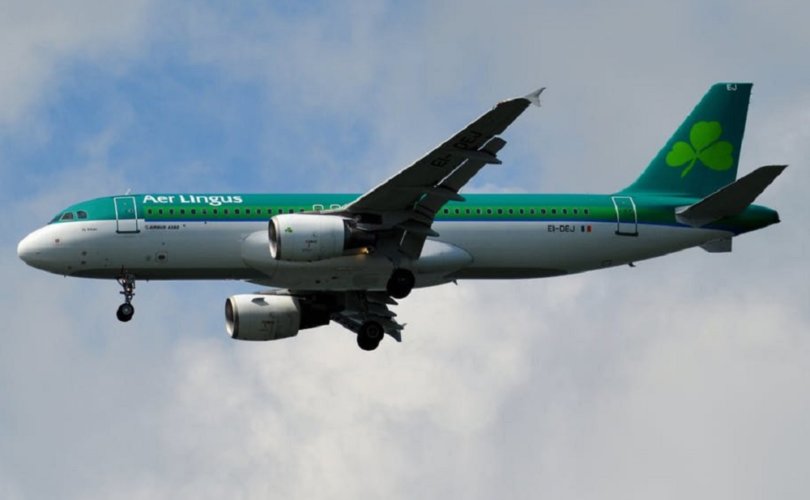 June 7, 2018 (Lepanto Institute) – This past May, I traveled to Rome to participate in the Rome Life Forum, the John Pail II Academy for Human Life and the Family, and the Rome March for Life.  While I was there, I made a pilgrimage to Norcia to visit the birthplace of Sts. Benedict and Scholastica.  It was a fantastic trip, and a good opportunity to pray for the intentions of our readers and supporters while continuing to fight against the encroaching Culture of Death.

Unfortunately, my flight to and from Rome was terribly marred by the decision of Aer Lingus to include pornographic “entertainment” on the seat-back video screens.  Two programs readily available to all passengers on the flight included nudity and graphic sex-scenes that were visible to anyone and everyone (including young children) sitting in the rows behind those viewing them.  The two programs were “Game of Thrones” and “The Handmaid's Tale.”

Having never watched either of these programs, I didn't really understand why lengthy scenes of nudity, sexual intercourse, and graphic rape were popping up on screens all around me.  And truth be told, I'm not sure what shocked me more … that these scenes were being played on screens easily viewable by young children, or that the viewers (mostly women) didn't seem to be ashamed by the graphic nature of the scenes played before their eyes in a public space.

When I got home from my trip, I contacted Aer Lingus's Press Office to complain about the shows and let them know that I planned on writing an article about my experience.  Here is what I wrote:

To whom it may concern,
I am a journalist for a number of pro-life, pro-family websites, and I just finished a 6.5 hour flight from Dublin to NYC and I am very upset about the pornographic material being played on the entertainment screens during the flight. The material to which I am referring is the series, “The Handmaiden's Tale.”

I had never heard of this series until flying on Aer Lingus, and because of the number of people watching this show around me during the flight, it was impossible for me to completely shield my eyes from the graphic and lengthy sex scenes that clearly ran rampant through each episode of that show. The scenes were so graphic and so prolific it was a near constant bombardment on my eyes anytime I glanced up from my seat.

I am very upset about this, not only for my own desire to keep my eyes away from such filth, but because any children on the flight could very easily have seen those scenes as well.

I have also made note that the extremely sexually graphic series, Game of Thrones is readily available as well.

Before I write an article complaining about the graphic nudity and sexual content of the entertainment provided by Aer Lingus, I would like to give Aer Lingus an opportunity to provide a statement about its content selection guidelines, it's consideration for young audiences, and justification for providing graphic nudity and sexual content in its programs.

Since that email, I did a little research on what The Handmaid's Tale was all about.  Apparently, the series is based on a book originally published in 1985.  In an article by LifeSiteNews last year on The Handmaid's Tale, Claire Chretien described it this way:

The Handmaid's Tale takes place in a post-modern, fundamentalist America called Gilead. Men run the deeply misogynist society, which is plagued by a fertility problem.

Infertile women are either wives of powerful men or their servants. Fertile women are “handmaids,” forced to undergo ritualized rape in the hopes that they will bear children for the ruling class. When they do, the father and the wife take the child from them. The handmaids are then assigned to live with another couple and do the same thing all over again, producing children who are biologically theirs for the privileged, infertile women and their husbands.

To say that Gilead “misinterprets” the Bible or just takes Christianity too far would be more than an understatement. Rape, adultery, surrogacy, and the subversion of parental rights are deeply embedded in Gilead's society.

Chretien pointed out in her article that The Handmaid's Tale was becoming “iconic in the feminist world and has inspired advocacy against the pro-life movement. Pro-abortion rhetoric suggests opposition to abortion means one wants the world to be like the dystopia in The Handmaid's Tale, where women are brutally abused, the totalitarian government cuts off hands, arms, fingers, eyes, and regularly hangs people.”

The point is, it is absolutely unconscionable to air such filth in a contained space where its imagery cannot be escaped.

Five days after my email to Aer Lingus' Press Office, I received the following response:

Thank you for sharing your feedback on Aer Lingus' infight entertainment.

We offer complimentary inflight entertainment on board all our transatlantic flights in the form of a Video On Demand service. All guests are in charge of their own personal screen and choose the content they wish to watch. The content on offer comprises a very broad selection – everything from the latest blockbuster movies to TV box sets, games, music and a dedicated 'Kidszone' for all our younger travellers.

Content is selected very carefully and tailored based on current trends and popularity from a terrestrial perspective. We carry out regular surveys among our guests to ensure we are showing content we know they want to see. Recognising our rich Irish talent we also offer a strong selection of short films and documentaries that were filmed and produced here in Ireland.

We rate our content accordingly so guests are aware of its suitability and this is visible in our CARA magazine as well as on the screen itself. To protect children against any unsuitable content we have a parental lock feature on the system where parents / adults can automatically make any content unavailable should they wish. There is also ample kids content ready in our 'Kidzone' which includes a number of kids movies and TV shows.

Our content offering is in keeping with other European and North American airlines' inflight entertainment offering.

The response is woefully inadequate.

As I was preparing this article for publication, I took a final look at Aer Lingus' currently listed entertainment content and am happy to note that neither Game of Thrones nor The Handmaid's Tale are on the list.  While there's no accounting for any of the other selections made available by Aer Lingus, it's nice to think that perhaps the fact that these highly offensive programs are no longer listed is an indication that Aer Lingus got the message and acted accordingly.