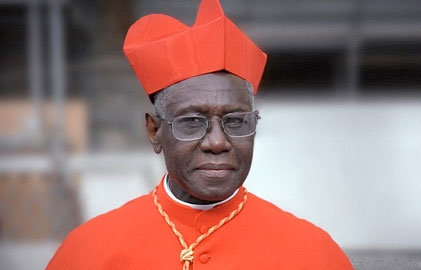 April 13, 2016 (Archdiocese of Washington) — The eradication of poverty is an oft-stated goal of the modern, liberal West. President Lyndon Baines Johnson’s pronouncement of a “war on poverty” so imprinted this notion in the Western mind that it has become almost axiomatic. It is now a fundamental pillar in the thinking of almost every person (and organization) in the Western world, from the religious pew-sitter concerned for the poor to the most secular humanist bent on a utopian vision. Poverty is a great enemy that must be stamped out!

The only problem is that this is contrary to the Gospel! It is no surprise, therefore, that even after decades of Western “do-goodism,” barely a dent has been made in the percentage of people living in poverty. In fact, some statistics show that the percentage in poverty has increased. But why should we expect great fruitfulness in something that opposes God?

I can see the look of shock on your face right now; you may even be embarrassed that I have written this. I’d like to share a quote with you from Robert Cardinal Sarah, which makes an important distinction that we need to recover. While what he says may also shock you, I encourage you to read it carefully and thoughtfully; the distinction he makes is critical. Not only does the Gospel depend on it, but cultures and individual lives do as well. For indeed, in the name of eradicating poverty some of the worst of Western arrogance has been displayed. It is an arrogance that does not even recognize that it can become willing to the destroy the poor themselves as well as what and whom they love all in the name of this “noble” goal.

Cardinal Robert Sarah is no neophyte in this discussion. He grew up in an impoverished region of Africa and later headed the Roman dicastery, Cor unum, a charitable arm of the Holy See. The extensive passage below is an abbreviated version of the Cardinal’s response to the following questions posed by his interviewer, Nicholas Diat:

How would you describe the nature of Cor unum, the dicastery to which you devoted several years of your life, in its fight against all sorts of poverty? Furthermore, why do you speak so often about the close relation between God and the poor?

In his reply, the Cardinal is reacting somewhat to Mr. Diat’s description of Cor unum’s work as “fight[ing] against all sorts of poverty.” The Cardinal’s response is nothing short of stunning. Please read it carefully and consider obtaining the book so as to able to read the unabridged remarks as well.

The Gospel is not a slogan. The same goes for our activity to relieve people’s suffering … [it is a matter] of working humbly and having a deep respect for the poor. For example, I remember being disgusted when I heard the advertising slogan of a Catholic charitable organization, which was almost insulting to the poor: “Let us fight for zero poverty” … Not one saint … ever dared to speak that way about poverty and poor people.

Jesus himself had no pretention of this sort. This slogan respects neither the Gospel nor Christ. Ever since the Old Testament, God has been with the poor; and Sacred Scripture unceasingly acclaims “the poor of Yahweh.” …

Poverty is a biblical value confirmed by Christ, who emphatically exclaims, “Blessed are the poor in spirit, for theirs is the Kingdom of heaven” (Mt 5:3). … The poor person is someone who knows that, by himself, he cannot live. He needs God and other people in order to be, flourish and grow. On the contrary, rich people expect nothing of anyone. They can provide for their needs without calling either on their neighbors or on God. In this sense wealth can lead to great sadness and true human loneliness or to terrible spiritual poverty. If in order to eat and care for himself, a man must turn to someone else, this necessarily results in a great enlargement of his heart. This is why the poor are closest to God and live in great solidarity with one another; they draw from this divine source the ability to be attentive to others.

The Church must not fight against poverty but, rather, wage a battle against destitution, especially material and spiritual destitution. … [so that all] might have the minimum they require in order to live. …

But we do not have the right to confuse destitution and poverty, because in so doing we would seriously be going against the Gospel. Recall what Christ told us: “The poor you will have always with you …” (Jn 12:8). Those who want to eradicate poverty make the Son of God a liar. …

[In his yearly Lenten message in 2014, Pope Francis] espoused what St. Francis [of Assisi] called “Lady Poverty.” … St. Francis of Assisi wanted to be poor because Christ chose poverty. If he calls poverty a royal virtue, it is because it shone brilliantly in the life of Jesus … and in the life of his mother, Mary of Nazareth. …

Similarly, I often think about the vow of poverty taken by religious … [they] do so in order to be as close as possible to Christ. The Son [of God] wanted us to be poor in order to show us the best path by which we can return to God. …

The Son of God loves the poor; others intend to eradicate them. What a lying, unrealistic, almost tyrannical utopia! I always marvel when Gaudium et Spes declares, “The spirit of poverty and charity is the glory and witness of the Church of Christ” (GS 88).

We must be precise in our choice of words. The language of the UN and its agencies, who want to suppress poverty, which they confuse with destitution, is not that of the Church of Christ. The Son of God did not come to speak to the poor in ideological slogans! The Church must banish these slogans from her language. For they have stupefied and destroyed peoples who were trying to remain free in conscience(Cardinal Sarah, God or Nothing: A Conversation in Faith with Nicholas Diat, pp. 140-142).

Perhaps stunned himself, Mr. Diat follows up with the following question: “Are you not afraid of being misunderstood in employing this sort of distinction?”

This is a powerful insight and it reveals the deep flaw in Western “anti-poverty” programs. Christ asks us to love the poor and imitate the best of what they are, not eliminate them and disregard the simplicity and trust that they can often exemplify. But we in the West, imbued with our materialistic notions and mesmerized by the comfort and control that wealth can temporarily buy, denigrate what the Gospels praises and seek to eradicate it.

So unreflective are we in this matter that some will even justify the most awful things in the name of eradicating poverty. Many programs (U.S.-sponsored and U.N.-sponsored) with this goal advocate for contraception, abortion, and/or euthanasia. Some have even sought to compel these sorts of things as a precondition for receiving aid. Some seek to impose certain aspects of Western thinking, something that has been labeled an attempt at “ideological colonization.” Many of us in the “First World” often speak of the “Third World” in a way that at best is patronizing and at worst exhibits a thinly veiled contempt.

While it is true that certain economic and political systems best support Western lifestyles, there is more to life than material abundance. With our own culture, families, and common sense collapsing around us, it seems odd that we so easily consider our way of life superior; that we see our relationship to the poor and to poorer countries as one in which we have all the answers and they should just listen to us.

The word “arrogance” comes to mind. We too easily assume, without even asking, that we know what is best; we presume that poor people in every part of the world want what we have (materially) and that they don’t perceive the awful price we have paid in order to get it.

We must recover a respect for the world’s poor, who have much to teach us. Even if they are not materially without troubles, they often possess many things we have lost: simplicity, family and tribal (communal) life, reciprocity, proper interdependence (as opposed to radical individualism), trust, a slower life, and a less-stressful life.

Further, we must not forget that the Lord counseled poverty (Lk 18:22), declared the poor blessed (Lk 6:20), lived simply Himself having “nowhere to lay his head” (Mt 8:20), lived among the working poor, and warned of the pernicious quality of wealth (Lk 16:13). God hears the cry of the poor and Mother Mary taught us of a great reversal that is coming, when the mighty and powerful will be cast down and poor and lowly raised up (Lk 1:52). Jesus taught us that many who are now last will be first in the kingdom of Heaven (Mat 19:30). In this life, the poor will sometimes need us. In the next life, on Judgment Day, we are going to need them to welcome us into eternal dwellings (Luke 16:9).

I really cannot say it better than did the good Cardinal, so I will not attempt to do so. We must surely work to alleviate the destitution that often comes in times of famine, war, or natural disaster. But destitution and poverty are not the same thing. Overlooking this distinction can be deadly for the poor we claim to serve and for their cultures, and can result in the worst forms of ideological colonization and secular utopianism.