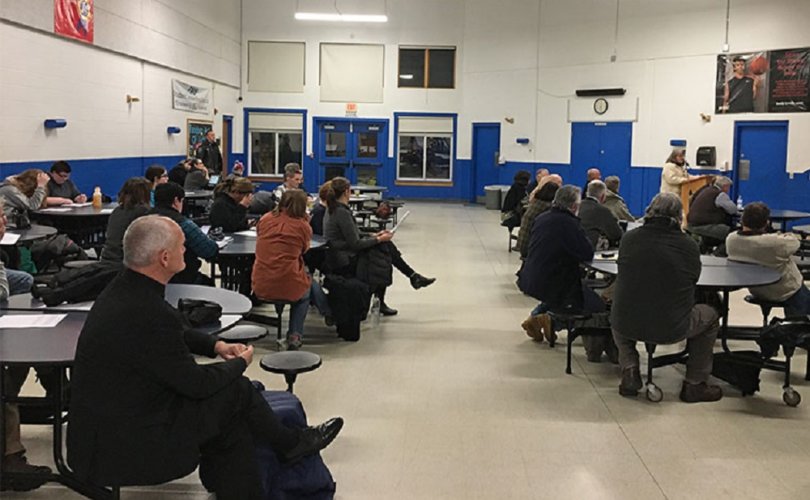 Outraged parents came to confront the Franklin, N.H. School Board at its Dec. 9 public hearing on the proposed 'transgender' policy for the public schools.MassResistance

December 18, 2019 (MassResistance) — Earlier this month, the school board in Franklin, New Hampshire, dominated by liberal politicians, was ready to pass an odious “transgender” policy that would impose bizarre and radical rules on all students (and their parents) in the district.

The proposed policy, titled “Transgender and Gender Non-Conforming Students Procedure,” reads like something from a crackpot “queer theory” book. Some of its features:

It's madness. But the school officials and Board members saw no problems with it.

The policy was quietly introduced by the Board in October, and given its second reading on November 18. Many people in town were shocked and outraged, but the Board members figured they could vote it in without much trouble.

Claiming that the state forced them to do it

The School Board said that the reason they were doing this was that in July the legislature passed into law Bill SB 263, titled “An act relative to anti-discrimination protection for students in public schools.” (The bill was signed by the RINO Governor Chris Sununu.) The law includes this vague clause that requires schools to develop some type of policy (with details left up to the individual school districts):

Each school district and chartered public school shall develop a policy that guides the development and implementation of a coordinated plan to prevent, assess the presence of, intervene in, and respond to incidents of discrimination on the basis of age, sex, gender identity, sexual orientation, race, color, marital status, familial status, disability, religion, national origin, or any other classes protected under [New Hampshire law].

This policy requirement appears to be another attempt to push the Left's growing ideological laundry list of “protected classes” into the public schools.

But the Franklin school officials are clearly using this as an excuse to push their own bizarre agenda by submitting a set of radical “transgender” rules to impose on everyone. They ignored actual wording of the law — and the larger list of anti-discrimination classes. And almost no one would have noticed that the school officials were doing that.

Then MassResistance intervened. In late November we got a call from Karen Testerman, a member of the Franklin City Council and a long time pro-family activist. The parents there needed help, and we got right to work!

We organized people and educated them on what was happening and how to deal with it. We worked with the people in Franklin to begin an aggressive social media campaign along with phone calls to Board members, and hard-hitting testimony at the Board meetings. We made sure that people knew very clearly how this proposed policy doesn't even follow the law, but is just a sham being pushed by pro-LGBT officials.

On December 9, the Board conceded to parents' demands and held a public hearing to hear comments from the community on the new policy. We didn't disappoint them! People filled the room.

One of the most powerful speakers was Karen Testerman.  Among other things, Karen told the Board Members:

Others reminded the Board — also in very strong terms — that this is all unscientific nonsense that will result in hideous destruction to children. People are either male or female — and that is permanent. It's a clinical disorder for anyone to believe it's possible to change their sex. So-called sex reassignment involves amputation of healthy body parts and other ghastly procedures that cause permanent harm and disfigurement. One study has shown that over 40% of transgenders have attempted suicide. These children need psychiatric help, not pandering to their afflictions.

Only a few people came and spoke in support of the transgender policy. The high school principal, who agrees with the policy, sat with the supporters. (That says a lot about the kind of people who are running the schools.)

But our efforts worked. As a result, at that meeting the Board Chairman announced that the policy was being sent back to the “policy committee” for a re-write. And we're organizing even more people to sure it doesn't come back in any similar form!

We'll take a stab at that here: A true, common-sense anti-discrimination policy, going along with what the text of the law instructs, would “guide the development and implementation of a coordinated plan” that would protect all students and their parents from having to subvert their values and religious beliefs to unscientific quackery and radical ideology. This would certainly apply to the laundry list of “protected classes” being thrust at them by the Legislature.

(If a student claims to be “transgender,” the school should make no special arrangements, and should not require others — students, teachers, staff — to go along with the charade.)

That kind of policy would ultimately be better for everybody. It's something all parents should demand.

As we mentioned above, the fact that the principal, Superintendent, and School Board all have no problem with the outrageous policy they almost voted in should be a huge red flag to the community! Most people simply don't appreciate how bad the people running our schools really are.

We'll keep you informed on what happens with the Franklin School District policy.