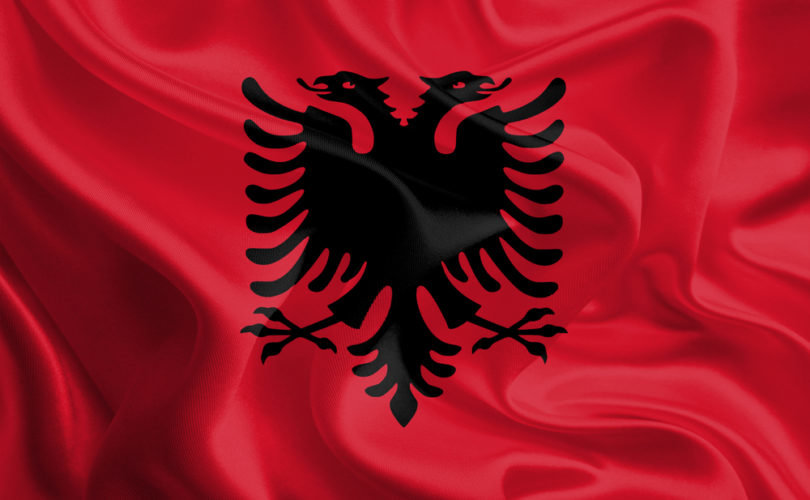 February 19, 2015 (HLI.org) — Shortly after Pope Francis had visited this country with its “long path of suffering,” notably under the dictatorship of Enver Hoxha, I gave a talk in Lezhë, a mostly Catholic town in North-Western Albania. But my talk focused on another kind of dictatorship – the dictatorship of relativism and the false notion of freedom that leads to the killing of the weak to preserve the freedom of the strong. Every seat was occupied in the Basilica of Lezhë, and thanks be to God half of them were further moved to participate in a big prayer rally afterwards. For the first time ever, pro-lifers marched for life from the Basilica to the hospital where abortions are performed. It is scandalous when doctors kill on one floor, yet serve to deliver babies on another! It would be a great grace from Heaven to make this absurdity visible to the entire town.

Sadly, sex-selective abortion is more and more common in this part of the world. Dave Andrusko’s article last year, “Alarming Rise in Sex-Selection Abortion in Europe,” showed that “in Albania, 112 boys are born for every 100 girls, while in Kosovo and Montenegro the figures stand at 110 and 109 boys per 100 girls respectively.”

When Albania rejected communism almost 24 years ago, it was abandoning one of the most rigid communist systems in the world  – one that was explicitly declared atheist. Many Catholic clergy and others deemed “elites” by the communists were killed between 1945 and 1948, and in 1967 they began to destroy churches and moques. Their objective was to eliminate God from the lives and hearts of the local Catholic people and all believers.

“None could even utter the name of God or make the sign of the cross openly,” said Kimete Klenja, a consecrated lay woman and HLI partner. Most of the churches were destroyed while the cathedrals and the big churches in the cities were turned into sports halls, cinemas or cultural centers.

Although the Catholic Church was struck very hard, the people’s spirit remained strong. The remaining priests offered the Sacraments to those practicing the faith in secret. The martyrs’ blood was a seed for the preservation of faith in Christ during the years of communist dictatorship — and for the return of faith these past 20 years of democracy. The process of canonization is already underway for 40 Albanian martyrs.

With new laws and regulations established after the fall of communism, one particular law entered almost unnoticed. The Law for the Interruption of Pregnancy was became law on December 7, 1995.

Since then, thousands of preborn Albanian babies have been legally killed every year by abortion. Of course, not included are those who have been killed by contraceptives with abortive effects and the morning-after pill. It continues still today!

Despite this tragedy in Europe, we are thankful for Bishop Monsignor Ottavio Vitale, of the Roman Catholic Diocese of Lezhë, who encourages and admonishes his own clergy, as well as the laypersons, to adhere to the truth — Biblical teaching, Church Tradition, and Natural Law which naturally reveals the truth about the human person.