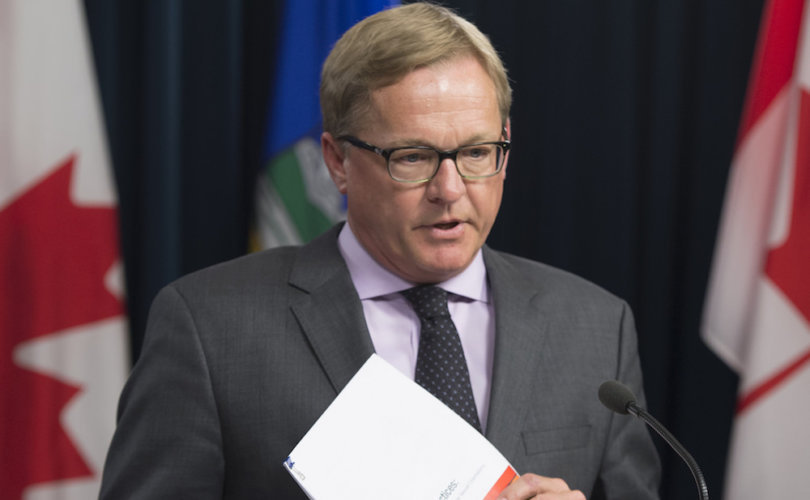 April 21, 2017 (LifeSiteNews) – Alberta’s Education Minister David Eggen claims to be “deeply concerned” about a pro-life presentation made in a Catholic school in Red Deer, which mentioned both abortion and the Holocaust.

Yet Eggen does not seem to be deeply troubled by the sexually graphic material that was provided to K-12 children on his government-funded Alberta GSA Network website, developed by the Institute for Sexual Minority Studies and Services (ISMSS) under the direction of his friend Kris Wells.

Wells is the professional activist and propagandist who heads the ISMSS.  Wells’ thoughtful academic scholarship includes tweeting a cartoon comparing Christians to Nazis, and routinely denouncing Albertans as “homophobic” if they dare question progressive sexual orthodoxy.  Under the supervision of Wells, the taxpayer-funded GSA website provided children with links to “Super practical sex positions everyone can try at home” and “Eight things they teach you at blow job school.”

Eggen is not concerned about Wells supervising a website for children which linked to “Fruit Loop” and graphic nudity.  Eggen apparently wants Alberta teachers to have “resources” like “These kinky sex toys are guaranteed to spice up your bedroom this Valentine’s Day.”  This GSA website had links to introduce children to the “Zebra” sexual alphabet: ‘A’ is for Auto-fellatio, ‘F’ is for Felching, ‘U’ is for Urophilia, ‘Y’ is for Yellow and Brown Showers.  Felching is so revolting (and unhealthy) that no decent website or other publication could even describe this practice; google the term at your own risk.

The public links to these materials were removed from the government’s GSA website when Alberta mother and former teacher Theresa Ng blew the whistle on her blog, Informed Albertans.  As Ng explains it: “It is true that sexually graphic content is available on the internet and kids could find it anyway.  However, using schools to intentionally direct and connect children to community organizations that peddle sexually graphic content is not safe or appropriate. It is dangerous, reckless and wrong.”

Ng has been viciously and publicly attacked on Twitter, Facebook and elsewhere, yet our courageous Anti-Bullying Crusader David Eggen has not bothered to denounce the bullying, name-calling and hate that has been directed against Ng.

In spite of Wells knowingly making grossly inappropriate materials available to children, Eggen has kept Wells in charge of this GSA website. Schools across Alberta continue to register with the Alberta GSA Network, and Eggen still allows ISMSS to do “Fyrefly in Schools” presentations to children.

Instead of firing Wells from his position of authority and trust, Eggen has joined the predictable chorus of social justice warriors like Cristina Stasia, who claimed that the pro-life presentation in a Catholic school was “medically inaccurate.”  Stasia teaches “gender studies” at the University of Alberta and has a Ph.D. in English.  Her website lists no medical qualifications.  Apart from assuming that her own philosophical beliefs are absolute Truth and beyond debate, Stasia provides no examples of the “incorrect” information that she publicly decries.

What Eggen and Stasia are expressing is naked hostility to the Catholic teaching that human life is as valuable before birth as it is after birth.  One does not need to be Catholic to know that the Catholic Church has long taught, rightly or wrongly, that abortion is a grave evil, constituting the deliberate killing of a human being.  One can agree or disagree with Catholic teaching, but let’s not pretend that this is newsworthy.  Yet Alberta’s Education Minister denounces as “hateful propaganda” the Catholic Church’s opposition to what it considers to be different examples of large-scale killing.  Does Eggen not understand that the very purpose of constitutional protection for Catholic schools in Alberta is to allow them to be actually Catholic?

Calgary lawyer John Carpay is president of the Justice Centre for Constitutional Freedoms.