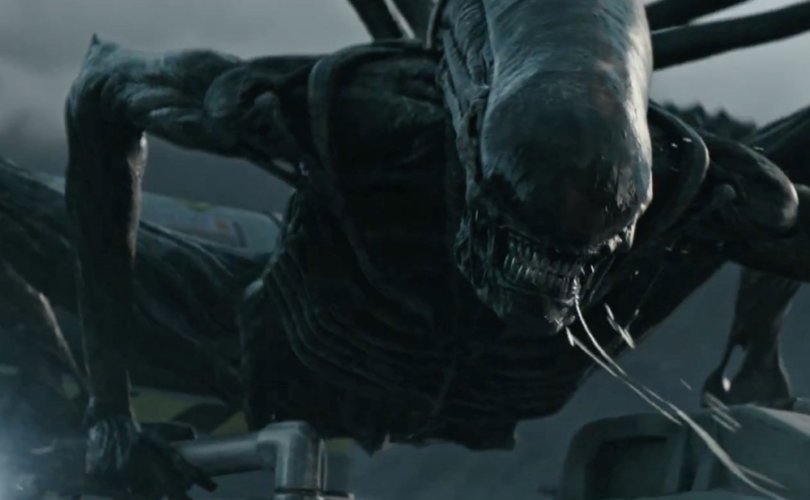 May 18, 2017 (LifeSiteNews) — The sixth installment of the popular Alien franchise, Alien Covenant, will burst onto screens across the United States and Canada on May 19. Don’t be fooled into thinking that this is simply another spawning of the never-ending parade of mindless, slime-soaked sci-fi horror films released for the masses to consume. No, this is the culture of death at its best providing so-called “entertainment” for anyone who holds a diabolical vision of the world where babies in the womb are viewed as parasites, abortion is glorified, and population control is a necessity.

Understanding the culture’s fascination with the Alien series helps diagnose the malaise of our contemporary, death-obsessed world, which is important for anyone wanting to evangelize those souls wandering in the cavernous desolation of the culture of death.

The original Alien, released in 1979, was crafted to shock and awe the viewer. The tagline of Alien was the chilling, “In space, noone can hear you scream.”

Alien was among the movies in the seventies and eighties — including works such as The Exorcist (1973), The Texas Chainsaw Massacre (1974), Friday 13 (1980), and A Nightmare on Elm Street (1984) —  which transformed the horror genre from simply being “scary” to being means of inflicting serious and permanent psychological damage on the audience. This transformation has had profound implications for all of Western, Christian civilization.

Since the time of the ancient Greek philosopher Aristotle, the purpose of dramatic art was to allow for a cathartic release, or purging, of the emotions of the audience by inspiring fear and pity in them.

The contemporary horror genre, however, is not intended to be an outlet for one’s emotions but a deeply traumatizing event meant to radically and perhaps permanently alter the worldview of the audience.

The Alien series has proven to be an almost a forty year experience of terror for several generations of moviegoers. Ridley Scott, the director of the first installment in the series as well as the most current releases Prometheus and Alien Covenant, said that the whole point of the movie series is “terror, and more terror.” More recently he said his goal in the Alien series is to “scare the [expletive delete] out of people.”

The Alien series certainly has accomplished this task of terrifying generations of audiences. But there is more going on here. The Alien movies terrify the audience while at the same time “deconstructing” Western Christian civilization, replacing it with a new, darker and “alien” one.

The Alien movies deconstruct the Christian understanding of the natural world as a home for humans that is fundamentally harmonious and good. In the world of Alien, nature is gruesome and violent, reflecting the Darwinist or “neo-Darwinist” view of a violent and hostile world full of organisms at war with one another.

The iconic figure of the movies is, of course, the xenomorph, (a word that literally means “alien”) the large, insect-like creature that mutilates human bodies and drags them away to be used as hosts into whom the eggs of future xenomorphs can be laid. At the same time, this creation has human-like features (since it can be “born” from a human host), and this parallel with the human form is meant to both make it more frightening as well as make the human body itself seem grotesque and frightening.

As an artistic creation, this creature has a curious history. It is based upon the 1976 painting Necronom IV by the Swiss Surrealist painter and Satanist H.R. Giger whose works are known for their ugliness, occultism, violence, and perverse vision of human sexuality and reproduction. Another of Giger’s most famous paintings is The Birth Machine, which depicts deformed babies being loaded into a 9mm Luger pistol. Similar to the gross humanoid “alien” in Necronom IV, The Birth Machine is intended to encourage contempt for the physical world.

Giger has said that this work was inspired by his fear that human overpopulation is the greatest threat to the world’s existence. Like Giger’s paintings and sculptures, the Alien series is, in a sense, a long advertisement for population control by portraying the physical world and human reproduction as being fundamentally grotesque and violent.

The various directors of the movie series have used this anti-life vision as a palette for the most memorable scenes of the Alien franchise.

One of the most iconic scenes in Alien 3 occurs when Ellen Ripley, the primary protagonist of the film series, is in the infirmary of a penal colony. A xenomorph enters the infirmary and after killing one of the patients, presses its slimy terrifying but nonetheless humanoid face very close to Ripley’s. This scene is clearly meant to be a gross parody of human tenderness captured in traditional paintings such as the Madonna and Child.

In the more recent Prometheus and Alien Covenant, there is a deeper and more explicit attack on Christian theology.

Director Ridley Scott adopts the “directed panspermia” theory held by neo-Darwinists such as Richard Dawkins, which suggests that life on earth was seeded by extraterrestrials. In Prometheus, it is a group of extraterrestrials called the engineers who seed life on earth through a mysterious black goo. Instead of teaming birds and animals that God created in Genesis, however, the engineers create violent and revolting monstrosities, which, the movie implies, include humans.

Nasty life must be destroyed

This crude, dark, gnostic theology provides the ultimate basis of the anti-life message permeating all the Alien movies: all of this nasty life must be destroyed.

It is not a coincidence that Alien premiered just five years after abortion became legal in 1973 with Roe vs. Wade. Abortion and infanticide are perhaps the dominant themes of the movie series.

The process of gestation of the aliens in the movies clearly follows the pro-abortion theory of the human child as a parasite or “alien” in the womb of the mother that, after worming its way out of the mother, leaps into the world, consuming everything in site.

Thus, according to the pro-abortion logic of the movies, the only way to prevent the offspring from devouring and destroying the world is to kill them.

It’s not too surprising that there are several abortions performed in the series. In Alien 3, Ridley performs a gruesome after-birth abortion of a queen. In Prometheus, Elizabeth Shaw performs an abortion on an alien who was impregnated by her lover who himself was infected with the black goo.

The overt, anti-life message is that the organisms that are generated from the human body are grotesque consumers who must be exterminated for the greater good of the community.

The final core component of the Alien movie series is transgenderism and role reversal of males and females. The most prominent example of this is that most of the “births” of aliens in the movie are spawned from males. From the famous eruption of the first xenomorph from the character Kane in Alien to the gestation of the “deacon” xenomorph from the male engineer in Prometheus, the Alien movies reverse the image of the male, making him like a female who can grow life within and give birth.

The second element of reversing gender roles is the positive portrayal of Ripley as a machine-gun wielding female who makes war with other life-forms. This reverses the Christian ideal of the woman being a life-giving mother who is the heart of the home. Exalting the character Ellen Ripley as an empowered female soldier who makes war certainly does not empower women, but degrades them to the level of Darwinian organisms who are at war with one another.

The most prominent scene of this degrading view of women is found in Ripley’s fight with the queen xenomorph at the end of the second Alien movie. In the scene, the human female and xenomorph female are paired as two violent “mothers” at war with one another for survival. Ripley is protecting her (adopted) offspring Newt from the alien queen and, at the same time, is trying to destroy the queen’s eggs, her offspring.

These anti-life and anti-woman messages can certainly be expected in the new installment of the series.

Covenant is already being praised by reviewers for “upping the ante” in regard to graphic violence. Trailers indicate that the movie continues the diabolic message of the series. In the trailers, plant spores on alien moons infect humans with monstrous offspring. Humans become fragile targets for hungry creatures that are, in the end, not so much different in form and function from the humans they greedily devour.

Yes, the Alien series provides a good view into the workings of the culture of death.

Exposing the darkness and lies of the series can provide the life-and-family movement ammunition for the fight for a true culture of life. But Christians wanting to win the culture war must boycott the works of darkness that present themselves as “entertainment.” And they must engage in the production of their own culture, a culture of life, that weaves a noble vision of the created world as a common home where every person is welcome and each is valued for being created in the image and likeness of God.