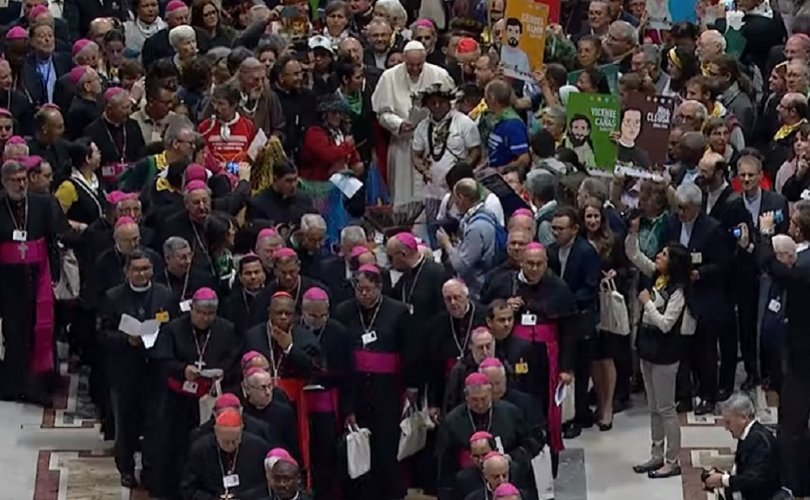 Note from the Author: I am in Rome following the Synod on the Amazon and will be posting regular commentaries on that event in a special section that you can access in coming days by checking this space. The regular columns will continue to appear below. — RR

October 7, 2019 (The Catholic Thing) — Pope Francis is fond of saying that “synod” means “walking together.” In the right circumstances, it might mean that (though usually it just means a “meeting”). In the wrong circumstances, it can take on the less happy meanings of the original Greek synodos — like the “meeting” that happens when two parties face each other in a courtroom — or two armies clash.

That troubling meaning of “synod” has been quite evident in past weeks. Before the Amazon Synod even started — the bishops, vested in green, joined the pope for Mass at St. Peter's yesterday and begin their work today — there was a swirl of passionate claims and counterclaims, the likes of which have probably never been seen in Rome at this kind of an event.

Quite a few Catholics have been appalled at the synod's strange mixture of changes to the priesthood and roles of women with ecological concerns — and openings to pagan superstitions. And rightly so.

On Saturday, Pope Francis along with Brazilian Cardinal Cláudio Hummes and Cardinal Lorenzo Baldisseri (both leaders of the synod) attended an indigenous ritual, a tree-planting ceremony in the Vatican gardens. Participants danced around a mandala, spread soil from “symbolic places,” and bowed to two female fertility figures. A male figure with erect penis lay nearby. (See here.)

The pope himself threw in the first shovelful of dirt. After sitting for an hour in the hot Roman sun, he looked tired and chose to set aside his prepared remarks. He just recited an Our Father without comment, and left.

This is no small matter and it's difficult to see how cardinals and bishops simply let it pass. Many don't, privately, but this will have major public repercussions, not least the scandal of suggesting that Christ is not the only way to the Father — which the Vatican seems more and more ready to allow. (We have here another example of confusion over the Abu Dhabi Statement that Pope Francis signed asserting that God willed a “pluralism and diversity of religions.”) Giving the impression that non-Catholics are pretty much fine where they already are is the quickest way to tamp down enthusiasm for evangelizing — which this synod is supposed to be encouraging.

It's worth remembering too that fertility gods were associated with child sacrifice in the ancient Mideast; Jewish monotheism definitively broke with all that. Some indigenous gods in the New World, too, notoriously demanded human sacrifice.

So, why flirt with the very things God Himself long ago revealed were false and dangerous — and therefore to be avoided? Some of the organizers have claimed that one of the female figures was Our Lady of the Amazon. But this hardly makes everything okay. You don't need to be a liturgical expert to see that the whole ritual doesn't exactly worship the God of Abraham.

This sort of thing, which has now taken place on the very grounds of the Vatican, seems to be precisely what the synod organizers had in mind when they wrote of including indigenous elements in the Amazon church's liturgy. And what many Catholics view as dangerous and reckless.

Meanwhile, at the opposite extreme, a group of women religious, perhaps sensing that we are at what the anthropologists call a “liminal” moment — crossing a threshold — are objecting that the synod is too tradition-bound. (Technically, it remains a synod of bishops.) But the women want the right to vote, like the men, on proposals. And why not since, along with ordaining married viri probati (older, proven men), the synod will be considering giving women some sort of clerical role?

Cardinals Hummes and Baldisseri defended the synod in a press conference last week, arguing that Catholics should “listen to” the Instrumentum Laboris. The “Working Document” is not magisterial, they say, and furthermore is the product of consultations with 80,000 people in the Amazon region. Well, we know how “consultations” work. The “listening Church” that we have heard so much about in recent years seems very much to listen with the left ear, not the right.

Indeed, the very notion of “indigenous peoples” increasingly seems to be an ideological construct. They are being “heard” — certainly more than cardinals, bishops, theologians, and lay people who are seeking to conserve the simple truths and longstanding disciplines of the Church.

The bishops and others carefully selected to participate in the synodal discussions over the next three weeks seem very unlikely to resist this ideological tide.

On the contrary, criticism of the synod has been attacked as “fake news”; some have even called on the American bishops to scrutinize conservative Catholic media — rather than listen to what they have to say.

It can't be repeated enough: what is being contested here is not whether Catholics should care for the Earth. It's God's Creation and we should. Even less is it about the need for a sensitive and renewed evangelization of the Amazonian people. That goes without saying.

People around the pope keep trying to cast the controversies as matters of politics and power and money — which is maybe what most interests them. But very few critics of the Amazon Synod are motivated by a desire to defend oil companies or global capitalism. Virtually all are agitated by a quite cavalier attitude in the Vatican itself these days towards the truths and practices of the faith, in a world where many Catholics, even in places long already evangelized, don't even know Church teaching about the Eucharist.

Just before leaving for the Amazon Synod, I was talking with a friend who has chosen to give up various high posts to take up teaching philosophy. Among other things, we chewed over what to do when it seems that all the institutions are failing. (What, that is, besides pray and fast.)

We discovered that we had each just come upon, independently, a passage in Lord of the Rings, where Gandalf is speaking with Denethor, who is steward, but not king, of Gondor. Things look bleak. Sauron is about to attack. Denethor is trying by any means he can to hold on to power.

Gandalf speaks to him of the predicted return of the true king:

… my lord Steward, it is your task to keep some kingdom still against that event [the king's return], which few now look to see. In that task you shall have all the aid that you are pleased to ask for. But I will say this: the rule of no realm is mine, neither of Gondor nor any other, great or small. But all worthy things that are in peril as the world now stands, those are my care. And for my part, I shall not wholly fail of my task, though Gondor should perish, if anything passes through this night that can still grow fair or bear fruit and flower again in days to come. For I also am a steward. [Emphasis added.]

In short, in times like these, if we are wise, we too all become intentional stewards; we take care to preserve or grow whatever we can, even as the large forces of history and culture stagger around, and the large schemes to control them seem mostly to make things worse.

And there's another large benefit of realizing you are a mere steward: you also come to understand how much we always need the King of Kings to guide his Church.