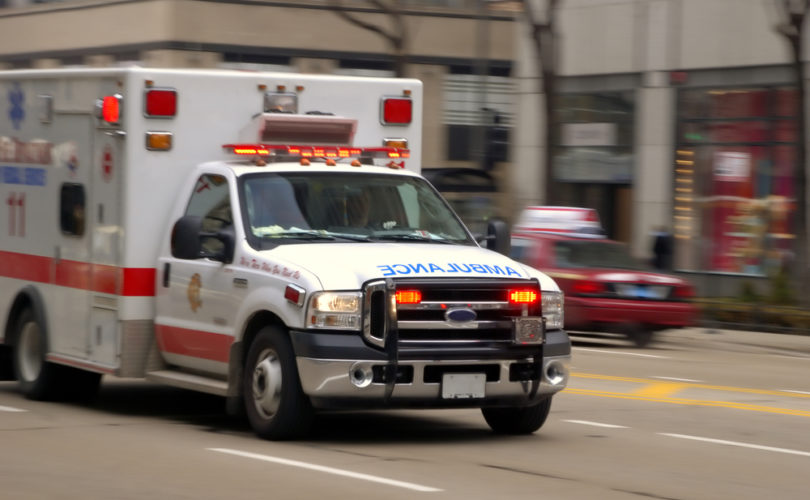 March 20, 2015 (ProLifeAction.org) — It’s been three weeks since a woman was taken away in an ambulance from the National Health Care abortion facility in Peoria, Illinois. And from the 911 audio — “We need somebody very quickly” — it didn’t sound good at all.

You might expect that this incident would prompt the director, Margaret Vanduyn, to keep a low profile. Yet she was eager to be interviewed for an AP story that appeared this week in the Chicago Sun-Times about an Illinois House bill (introduced, coincidentally, on the very same day as the ambulance incident in Peoria) that would require annual unannounced inspections of all abortion facilities in the state:

Margaret Vanduyn, executive director of the National Health Care clinic that offers abortion services in Peoria, said an annual inspection would be unnecessary. The state sends inspectors “every couple of years,” she said, but most of the problems they have found involved paperwork and, in one case, an outdated certification on equipment. Vanduyn said she believed the proposal to increase inspections was “politically motivated.”

Abortion clinic managers bellyaching about the prospect of greater oversight is, of course, nothing new. But Vanduyn, perhaps even more so than most, should be the last to complain.

The National Health Care facility was inspected [PDF] in June 2011 for the first time in nine years. A few months later, an article that ran in the Peoria Journal-Star noted that inspectors found “dozens of violations,” with several described by Illinois Department of Public Health (IDPH) Spokeswoman Melaney Arnold as “serious.” (At this point it’s also worth noting that National Health Care is a member of the National Abortion Federation, which styles itself as the gold standard of providers of so-called “safe, legal, and accessible abortion care.”)

As for the other seven? Again, via the Peoria Journal-Star:

The Peoria clinic had the most violations of the remaining seven clinics, said Melaney Arnold, spokeswoman for IDPH.

“The other six had minor deficiencies, maybe a page or two, compared to Peoria’s 22 pages of deficiencies,” Arnold said. IDPH inspectors also made two return visits to the Peoria clinic, which was not necessary at the others. [emphasis added]

Time and space do not permit a detailed recounting of these 22 pages of deficiencies, but consider just one area in which inspectors found that National Health Care wasn’t doing things by the book: namely, drugs.

Inspectors with the IDPH found numerous drugs unsecured and/or unlabeled. Failing to follow proper drug protocols isn’t just a no-no.  It’s a big no-no. Remember: it was an investigation brought by the DEA that led to Kermit Gosnell’s downfall.  And the DEA likewise shut down an abortion clinic in Cuyahoga Falls, Ohio in 2013.

In the plan of correction that National Health Care submitted to the IDPH, Vanduyn wrote in response to the findings of unsecured drugs: “The narcotics are now totally secured and locked.”

Good. But take note: this would not have happened without an inspection.

The Abortion Industry Cannot Be Trusted to Police Itself

But look at reality.

Look at what inspectors actually found in Peoria [PDF], not just regarding drugs, but regarding a whole host of other issues as well.

Then look at the ambulance video from Peoria (below) and decide for yourself whether abortion clinics can be trusted to police themselves.