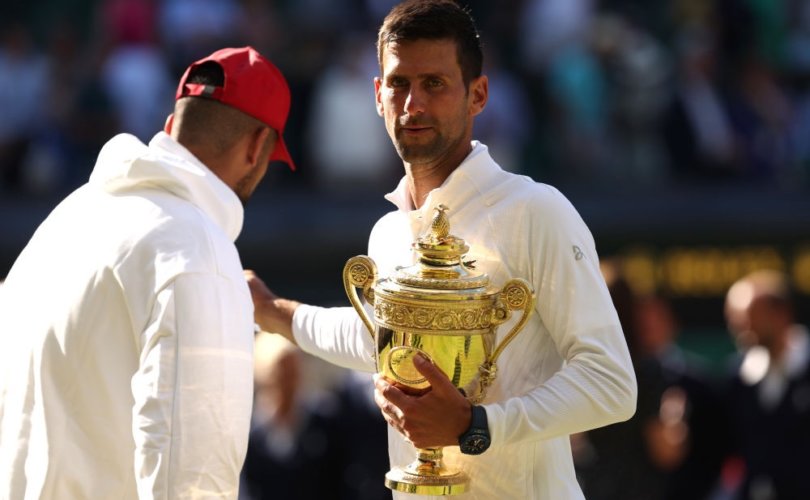 (LifeSiteNews) — Last week, the organizers of the 2022 U.S. Open tennis championships confirmed they would not allow Serbian Christian superstar Novak Djokovic to compete. Why? Because he steadfastly refuses to get the COVID jab.

The U.S. Open, which doesn’t have an independent vax mandate, is nevertheless bowing to the arbitrary rules imposed by the federal government, which require all travelers from outside the country to get the COVID shot to enter the United States.

“The U.S. Open does not have a vaccination mandate in place for players, but it will respect the U.S. government’s position regarding travel into the country for unvaccinated non-U.S. citizens,” the tournament’s organizers said in a statement.

The US Open has confirmed Novak Djokovic isn’t allowed to play because he refuses to get a covid shot that doesn’t work. Now tens of thousands of tennis fans are signing a petition arguing to let Novak play. https://t.co/hanzdVWXaW

While many of the top-down restrictions imposed in response to the coronavirus pandemic have been removed, ruled unconstitutional, or simply fallen out of favor, the CDC’s October 2021 mandate requiring non-U.S. citizens to show proof of vaccination is one rule that hasn’t been scrapped.

Ironically, Djokovic had been allowed to compete in the U.S. Open last August, but the Biden administration’s October mandate forced him to back out of two other U.S. tournaments in early 2022, and will now keep him out of the 2022 U.S. Open.

It’s a turn of events that cannot but expose the capriciousness of ongoing American coronavirus policy.

As two-weeks-to-slow-the-spread has sailed past the two-year mark, and the “experts” have grudgingly admitted the COVID shots don’t stop infection or transmission of the virus (which they’ve also acknowledged was always far less serious than we were led to believe) it’s patently absurd to keep a top athlete from competing in a major tournament just because he doesn’t want to get an injection.

The CDC and US Open face pushback

The petty dismissal of a star athlete for his personal medical decision paints a picture of corporate and government bureaucrats trying to hold onto power by their very fingernails, even as “the people who are compliant” (as Dr. Fauci put it), have put their worries about the China virus behind them.

And while the U.S. Open and the entrenched powers in the CDC put safetyism ahead of sports, nanny-state smothering over personal responsibility, and virtue-signaling ahead of entertainment, they’re facing serious backlash for it.

“It makes no sense that Djokovic was able to enter America to compete in the U.S. Open in August 2021, but that he’s prohibited from defending… his title this year – when he recovered from Covid within the last 9 months, and Covid health risks have improved in the meantime,” complained health entrepreneur Vivek Ramaswamy in a July 24 tweet.

All covid mandates & restrictions are beyond stupid, but this is a great point. Djokovic played in the US Open last year without the covid shot. But this year he’s not allowed to? Even though we all know the covid shot is totally pointless — and potentially harmful — to athletes. https://t.co/F5FASxTtgw

“There is absolutely no reason at this stage of the pandemic to not allow Djokovic to play at the US Open 2022,” the petition reads. “US Government and USTA must work together to allow him to play. If unvaccinated American players can play, Djokovic as one of the legends of the game must be allowed to play. MAKE IT HAPPEN, USTA!”

As the signers of the petition rightly note, there certainly is “absolutely no reason” why Djokovic shouldn’t be allowed to compete in the U.S. Open.

The tennis champ just won the Wimbledon title for the fourth consecutive time in June. So while Great Britain has seen its fair share of COVID tyranny, as recently as last month the Brits apparently weren’t too worried about Djokovic’s personal medical decisions. At least, they weren’t worried enough to prevent him from entering the country without showing his papers.

Instead, America’s ongoing refusal to let Djokovic play draws an unfortunate comparison with how Djokovic was treated in Australia, a continent nation which has stunned the world since 2020 with its COVID quarantine camps, curfews, lockdowns, and police brutality.

Instead, after arriving on the Land Down Under with assurances of a vaccine exception, Djokovic had his visa revoked, was forced into mandatory isolation, subjected to an unhinged “witch-hunt” by pro-vaccine mandate forces, and ultimately deported. For his wrongthink, Djokovic may even be barred from returning to Australia for three years.

And as if in lockstep, the U.S. Open is imitating the petty tyranny of Australia.

‘I’m not going to go to America if I don’t have permission,” Djokovic told reporters last week, explaining that “the Australian saga for me was not pleasant at all” and that he “would never go into a country where I didn’t have permission to travel.”

And so as usual, the casualties of COVID mania are people like Djokovic who stand by their principles, and people like the 39,000 who cry into the wind that it just doesn’t make any sense.

But perhaps the biggest casualty, in this and every similar scenario over the past two years, is the complete loss of credibility from the institutions we used to think would safeguard our freedoms, protect our rights, and enforce laws that make sense.

Until we can take back some measure of political power, restore right thinking, and implement real justice, these types of capricious rules and mandates will continue to be our reality.