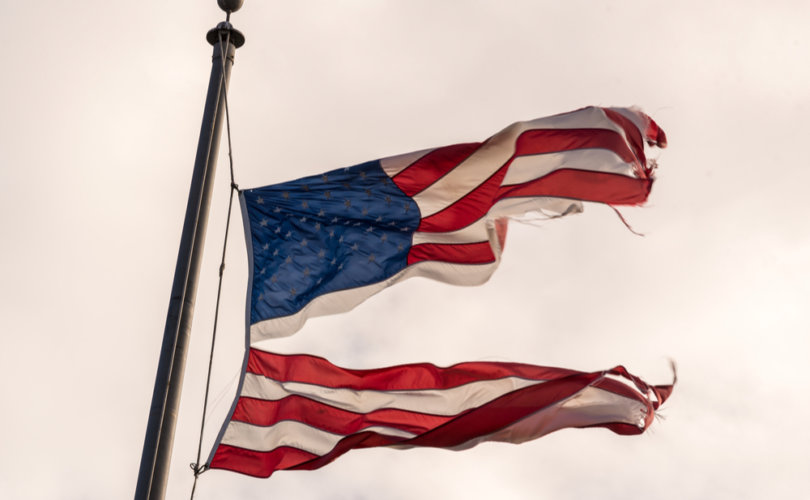 (American Thinker) – Not since the decade leading up to the Civil War has there been as much discussion about the possibility of the United States splitting into two or more countries as there has been in the past ten years.

The reality is that this nation has effectively split into two countries which are, for the moment, tenuously living side-by-side.

Race or ethnicity has been the underlying foundation in the creation of every nation in the history of mankind except the United States, as its founding was based on the tenet that all men are created equal and are endowed with certain unalienable rights that government cannot abrogate. As it does not have the cohesive factors of race or ethnicity, this nation as constituted can only survive based on the goodness of its people and the wisdom and integrity of its ruling class.

Benjamin Franklin at the close of the Constitutional Convention in 1787, in a speech to his fellow members of the convention, said of the newly drafted Constitution and the government it created:

“…and there is no form of Government but what may be a blessing to the people if well administered, and [I] believe farther that this is likely to be well administered for a course of years, and can only end in Despotism, as other forms have done before it.”

Franklin’s prescient forewarning has come to pass. Over the past thirty years, a plurality of ill-educated and malleable citizens have allowed the self-serving, decadent, and nescient ruling class, in alliance with the radical left, to establish near-permanent despotism in the United States. They have deliberately and inexorably widened the gulf between the people and the government and effectively split the nation into two de facto countries that are at ideological and societal loggerheads.

One America is hell-bent on stripping its citizens of their unalienable right of self-defense as codified in the Second Amendment, as well as eliminating constitutionally protected freedom of speech. Their mindless determination to confiscate guns by any means possible, either overt or devious, and censor speech they do not approve, is unbound and unrestrained, regardless of court rulings.

The other America is firm and unmoving in its belief that unalienable and constitutionally protected rights are non-negotiable and immutable. The unabashed attempt at disarmament has had the effect of convincing over half of the populace that these actions are a prelude to the government’s willingness to use force against the citizenry to strip them of all their rights. This, as 92 percent of Americans believe that all their basic rights are under siege.

One America is determined to protect the interest of the ruling elites by establishing an implacable two-tier system of justice. The ruling class and their militant bed-fellows have created a judicial system wherein their allies, followers, and politically correct felons and criminals are treated leniently or, in many cases, not prosecuted, while their political adversaries and followers who pose a threat to their hegemony and non-politically correct felons and criminals are hounded and prosecuted.

Meanwhile, in the other America, the citizenry adamantly believes in equal justice under the law: that they and all Americans have a constitutionally protected right to fair and impartial justice. Well over half of the citizenry is irrevocably convinced that there is a two-tier and unfair system of justice that benefits the ruling elites at their expense. This now intractable mindset has been reinforced by the treatment of non-violent January 6, 2021 protestors as compared to the actions of domestic terrorists in the summer of 2020.

One America is driven by and promotes class distinctions. At the top of the pyramid are the ruling elites and their wealthy patrons who look with disdain upon the rest of society while they live in their self-contained bubbles pulling the strings of governance and solely focusing on their upward mobility.

While they can look forward to the future, the bulk of society cannot, as they have to be focused on surviving the present due to the avarice of the ruling class and their decades-long allegiance to elitist globalism. These two sectors have distinctly different residential situations, upward mobility possibilities, educational opportunities, access to medical care, and interaction with the law.

In the other America, the citizenry still clings to respect for hard work, honest effort, and applaud those who strive to improve themselves and society. As they live in a nation that once prided itself on being an essentially classless society that featured upward mobility, they cannot tolerate a structured society based on self-absorption and avarice.  Thanks to this elitist egocentricity and mal-governance, over sixty percent of the citizenry believe the American dream is no longer achievable for them, as their resentment toward the privileged ruling class and anger at being permanently locked into a de facto caste system inexorably grows.

One America has reinstituted government-sponsored racism and discrimination with the malevolent intent of fragmenting the society and culture in order to achieve permanent political hegemony. The ruling class abetted its radical leftist allies in claiming that racism is embedded in America’s DNA (i.e., systemic racism), which is solely the fault of the current white population.

This segment of society, therefore, should be scapegoated and discriminated against, while American society is radically transformed because of the “white” founding of the nation. As a result of this malevolent tactic, they have successfully fomented racial animosity and manipulated Americans into believing race relations are worse than ever. As just 25 percent believe race relations are excellent or good in the nation as a whole.

The other America is the same one that in 2005 saw nearly 70 percent of Americans saying that race relations in the United States were very or somewhat good. These are the same people who are among the 77 percent in a recent poll who thought race relations were good in their community despite getting considerably worse nationally.

This dichotomy reveals that this country of working-class people is not racist or roiled by so-called “white supremacy” and whose indignation at the racist elitists that bandy about these false accusations is escalating.

In one America there is among the ruling elites and their mindless minions the dominant belief that the United States, as founded, is a deficient and irredeemable country whose history is rife with atrocities and unfairness. Thus, the nation’s government must be converted into a one-party socialist oligarchy and its flawed documents effectively re-written. This single-minded process begun decades ago has effectively resulted in the permanent fragmentation of what was a unique and universally accepted American culture.

In the other America the bulk of the citizenry (85 percent of Americans) believe that the United States is a great country that has successfully overcome the human failings of its past citizenries. They are vehemently opposed to any substantive changes to the nation’s founding documents. They understand that the Constitution, as written, guarantees their freedoms and independence from a now overbearing government. They will not compromise or be willing to find any middle ground with the ruling class and its mindless minions.

In one America the elites and their fellow-travelers in the upper classes have hypocritically abandoned virtually all morality in their single-minded pursuit of shallow hedonism, wealth, and fame. They are increasingly agnostic, they unabashedly promote the sexual exploitation of children, they approve abortion up to the point of birth, and they justify any immoral or unethical means to achieve their ends, among which is the coerced imposition of their immorality upon the rest of society.

As a by-product of their allies in the media and entertainment establishment promoting their immorality, a recent poll indicated that 50 percent of Americans rated the nation’s moral values as poor and getting increasingly worse.

While in the other America the vast majority of the citizenry (81 percent) believe in God, they recognize that belief in God or a religion is not a necessity in understanding the importance of morality and living a moral life. That morality is the underlying basis of a free society. Without morality, and its emphasis on respect for life, freedom is extinguished. These two diametrically opposed views of morality cannot co-exist in the same society.

These two countries within a country can no longer maintain their increasingly tenuous and potentially volatile relationship.

We as a nation are at that defining moment when one side has to win and the other lose; there is no middle ground. The era of conservatives, libertarians, and middle-of-the-road Americans seeking accommodation with the left and the ruling class, has ended, whether they want it to be or not, as more than half of the American citizenry agrees with the statement: “U.S. democracy is at risk of extinction” and only 26 percent believe it will survive.

In order for America, as founded, to win without either side resorting to dissolution or potential violence, the lifelines of the ruling elites/radical left must be severed and their political clout fully marginalized.

The recent focus on starting “conservative” news media must give way to focusing instead on new entertainment media in order to undercut the existing left-wing entertainment outlets. After boycotts and loss of audience have taken their financial toll, these and failing news media companies should be acquired.

“Politically correct” corporations must suffer the financial consequences of pandering to the left through boycotts, media messaging, and the targeted take-over of their boards of directors. Government funding for “woke” universities must be dramatically reduced and eventually eliminated.

The transformation of the Republican Party, begun by President Trump, must continue until the party is purged of all elected politicians and administrators not willing to unconditionally fight for the soul of the country. A determined and concerted effort must be waged in the state houses to make certain elections are fair and free of fraud. Voter turnout for all local, state, and federal elections must exceed historical averages as like-minded politicians must be selected in primaries and the general elections.

Lastly, instead of reveling in their independence and standing on the side-lines mindlessly throwing rocks, libertarians and other like-minded factions must join in the battle and unconditionally ally themselves with conservatives, Republicans, and moderate voters who wish to preserve this country as founded.

If not, then the country we all know and love will be no more.